Using the patients’ own bone marrow 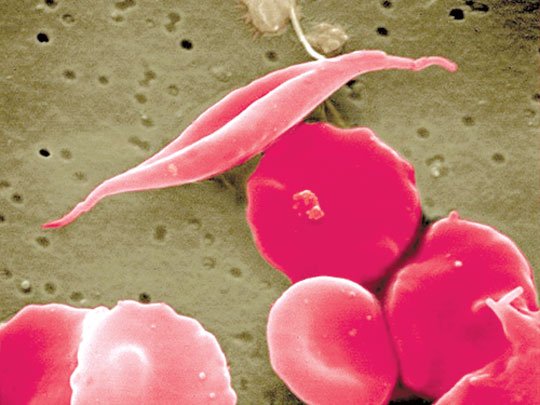 A sickle cell beside normal cells

Well, the two worlds have met, but it’s really not as controversial as it might seem.

“Not all stem cell research involves the creation, use, or destruction of human embryos,” Donald Kohn, M.D., a professor of pediatrics and microbiology, immunology and molecular genetics in the life sciences said. “Bone marrow has a specific type of stem cell,” Kohn said. “Not like the embryonic ones that all the controversy is about. These are adult stems cells.”

Prior approaches to treating sickle cell disease involved finding a matched bone marrow donor. Because the markers used in matching are inherited, patients are more likely to match someone from their own ancestry.

Thousands of patients with sickle cell, blood cancers and other life-threatening diseases depend on the Be The Match Registry to find a match to save their life. This program has been operated by the National Marrow Donor Program for more than 25 years and has been helping patients receive life-saving transplants.

The Be The Match Registry encourages African Americans to join at http://bethematch.org/join, because there aren’t enough donors for Blacks. Doctors request donors in the 18-44 age group 90 percent of the time to help patients with sickle cell; blood cancers like leukemia and lymphoma; and other life-threatening diseases.

The new UCLA therapy involves extracting the patient’s own hematopoietic (blood-producing) stem cells from their bone marrow, then introducing an anti-sickling gene into those cells to capitalize on the self-renewing potential of stem cells and create a continual source of healthy red blood cells that do not sickle.

This approach does not rely on finding a donor, or risking rejection of donor cells.

“Clinical trials are needed,” Kohn said. “We are engineering cells and putting in a new copy of a beta globin gene—part of hemoglobin, which is the main protein in red blood cells that carry oxygen around.”

“People with sickle cell have inherited a version of the beta globin gene that has a mistake in it,” Kohn explained. “That abnormal hemoglobin makes red cells become stiff and sickle-shaped when their oxygen is low.”

Symptoms vary from person to person, but the disease often causes pain, problems breathing and over time, strokes or progressive kidney problems that can lead to death in patients before they reach age 50.

“Our hope is that we can provide a treatment which can give patients a better and longer life,” Kohn said.

The prevalence of the disease in the U.S. is approximately one in 500 African American children, according to the National Institutes of Heath. Three quarters of sickle-cell cases occur in Africa. The disease is prevalent in malaria-stricken areas, where people’s chances of survival actually increase if they carry the sickle-cell trait.

Test tube chemistry in the laboratory so far suggests that an engineered version of beta globin can prevent the SCD patient’s red cells from sickling.

As a result, you would think SCD sufferers would be lining up to participate in upcoming clinical trials. But historically, African Americans have shied away from medical trials. There’s a history there. A mistrust. A communication issue.

Kohn hopes that the communication issue is waning. A stem cell transplant process was highlighted recently, when Good Morning America host Robin Roberts announced she was undergoing this type of procedure to treat her myelodysplastics syndromes (MDS). Her sister was her donor.

Clinical trials are medical research studies used to determine whether new drugs or treatments are safe and effective. The Food and Drug Administration considers the results from clinical trials in approving a drug or treatment. Once approved, the therapy becomes available for doctors to prescribe to patients.