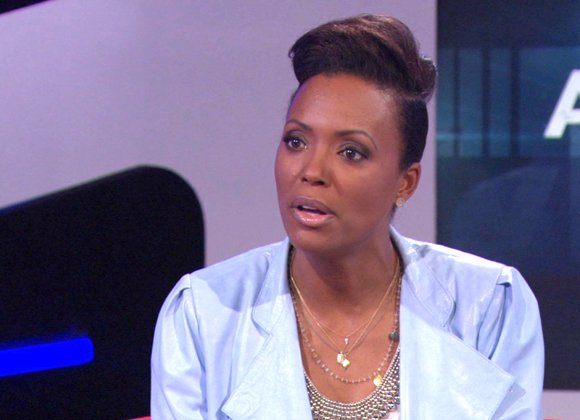 Aisha Tyler is not your typical comedian. The 42-year-old is a 6 foot tall woman who snowboards, camps, raps about her lack of a rear end, and can't dance.

Aisha Tyler is not your typical comedian.

The 42-year-old is a 6 foot tall woman who snowboards, camps, raps about her lack of a rear end, and can’t dance.

“I will never be the lead in Step it Up 17: Old lady gets to Krumpin’,” she writes in her new book. “I have made my peace with this.”

While she might lack rhythm, the Dartmouth grad speaks fluent French, with some functionality in Russian and Swahili.

Tyler was the first Black recurring character on Friends, has filled in for the late movie critic Robert Ebert and taken on gamers who questioned her nerd status.

A few funny things happened on the way to the native San Franciscan finding success as Lana Kane in the edgy animated FX series “Archer,” and hosting “The Talk, and the CW’s “Who’s Line is It Anyway?” She (regrettably) wore two-toned hair and a see-through dress on the red carpet, survived throwing up on a guy during their first date, and bombed countless times on stage.

In “Self-Inflicted Wounds,” her second book, Tyler argues that the path to success is paved with epic failures. And she’s not afraid to share her own hard-luck stories for a laugh or to show that fear of striking out should never keep you from swinging for the fences.

CNN recently caught up with the host of the podcast “Girl on Guy,” which inspired the book, out now.

CNN: How did an Ivy League grad, with a degree in political science and environmental studies, become interested in comedy?

And so after I got my degree in government and environmental studies, I thought, “Well, now I have a degree and I can take a risk and see if it will pay off because I can always go back to a traditional job.”

CNN: Throughout the book, you share stories of your self-inflicted wounds. In some way it is an anti-self-help book, showing how failure can help in your success. Why write about the failures?

CNN: What is it that you want people to most understand about you?

Tyler: That I’m not trying to live up to anybody else’s expectations of who I am. I’m going to, not that I’m striving consciously to be an iconic class, but I’m definitely also not striving to meet some set parameters either as an actress, or a comedian, or an artist, or anything. I’m just trying to do what I find compelling.

CNN: What would you tell your younger self about who you are now?

I mean even now, when I stand on stage, earlier in my career anyway, when people didn’t know I did stand-up, I would get up on stage and I would be a 6-foot-tall black woman, people had very specific expectations about what was going to come out of my mouth. And I’ve never ever been able to satisfy those expectations, and I realized very early on that I wasn’t going to change who I was to fulfill a set of expectations that people had about me. And I just plowed ahead until my audience found me. So I never stopped being a weird kid. Just that I found weird people who liked what I did.

CNN: How has being different shaped your journey?

Tyler: I hated when I was a kid being told that, “Black people don’t do that.” And the white kids at school didn’t accept me because I was black, and the black kids in my neighborhood didn’t accept me because they thought I thought I was white. So that was fine. I was in a no-man’s land. And that meant I just got to do what I thought was interesting. And that’s just who I’ve been since then. And it’s guided all of my decisions, which is I have never stopped to think, “Oh, you know, does this fit?” I just do what I want to do.

CNN: What do you believe in?

Tyler: I believe in hard work. I think that everything flows out of that. It doesn’t mean that you’re going to be successful, or traditionally successful because sometimes the world is just unfair, and untalented people get promoted and talented people get left behind, but if you are doing something that you love and you put a lot of hard work into it, you will be rewarded, and that’s been the thing I’ve hewn to for my entire adult life.