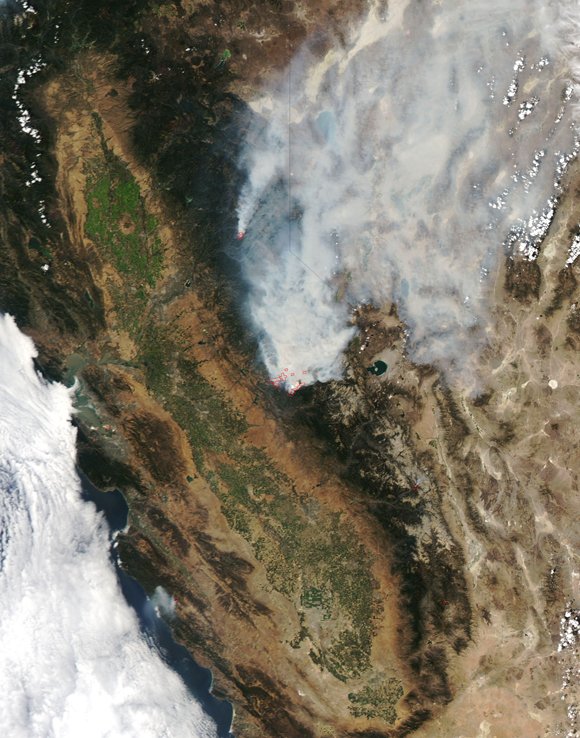 The Rim Fire, which has devoured more than 149,000 acres, has scorched an area about the size of the city of Chicago while more than 3,600 firefighters try to rein it in.

Susan Loesch and Curtis Evans just started settling into their second home in California’s Sierra foothills a few months ago. Now, they’re worried it could go up in smoke as the massive wildfire spreads.

“This is kind of a little paradise up here for us. ... To think this would all be gone would be devastating,” Evans told CNN on Sunday.

Cradling their Chihuahua, Cuervo, they prepared to leave the area Sunday.

“It’s scary,” Loesch said. “You worry about the firefighters being on the line. ... It’s overwhelming.”

The wildfire, which was 15% contained Monday morning, was spreading primarily to east and threatened to grow amid extremely dry conditions and hot weather.

Part of the fire continued to spread Monday toward a key part of San Francisco’s water supply: the Hetch Hetchy Reservoir, which lies within Yosemite and is just east of the flames.

The fire also could threaten the area’s hydroelectric generators, which provide much of San Francisco’s electricity. Because of the approaching flames, officials shut down the generators, and the city — more than 120 miles to the west — temporarily is getting power from elsewhere.

Northwest of the reservoir, rocky terrain could stop the fire’s growth there, Bentley said.

A top priority is stopping the fire from spreading further in Yosemite National Park.

“The park is a national treasure,” said U.S. Forest Service spokeswoman Vickie Wright, “so no matter what it takes, we’re going to do everything in our power to protect that park.”

While the Rim Fire has consumed at least 12,000 acres in the northwest section of the park, so far it has had little or no direct impact on Yosemite Valley, a popular spot for tourists and home to many of the famous cliffs and waterfalls in the park.

About 4,500 structures, many of them vacation homes, were under threat, according to InciWeb, a federal website that collects information from agencies such as the U.S. Forest Service and Bureau of Land Management. The fire so far has cost more than $20 million, Bentley said.

The inferno threatened the Yosemite gateway communities of Groveland and Pine Mountain Lake just outside the Stanislaus National Forest.

The fire has destroyed 11 homes and 12 outbuildings, as well as a Yosemite campground owned by the city of Berkeley, officials said.

Authorities say the Rim Fire started on August 17. The cause is under investigation.

The park typically has 15,000 visitors on a busy summer weekend. August sees an influx of visitors from other countries, a few of whom have called to check on conditions.

Ranger programs went on as normal over the weekend and campgrounds were full.

“If somebody cancels, there are 10 people that will take their spot,” said Yosemite spokesman Scott Gediman.