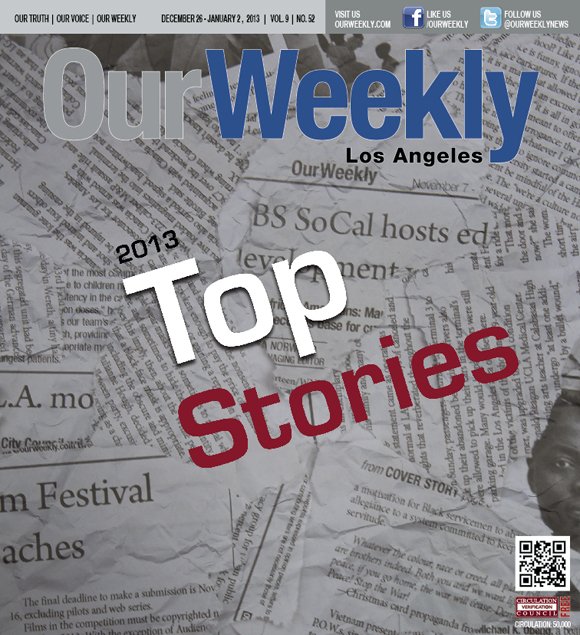 As we reflect on 2013 news stories, there were those that made us gasp in disbelief, others that made us jump for joy, and hundreds of articles in between. The OurWeekly editorial team has created mini-versions of some of the most talked about local and national news stories in the following pages. We wish you and your families a safe and happy holiday season. –OW

Leimert Park may be fading as a Black cultural hub

After a noble fight by some to win an underground station in Leimert Park as a compliment to the area considered the cultural hub of Black Los Angeles, those whose businesses have helped to make the area the cultural hub it is may not be around to enjoy the benefits.

A number of Black businesses in the Village have been notified that their leases won’t be renewed.

His lease was up in October.

The purchaser of the building is the West 43rd Place LLC while MBA Mascot LLC is the buyer of another building in the block. However, several business owners believe both properties are owned by the same entity.

Obinne Emmanuel Onyeador, owner of African Heritage & Antique Collection at 4340 Degnan Blvd., said that everybody who owns businesses there may have to move. Onyeador said six businesses adjoined to the Vision Theater will also have to move. “They cleared out the property on this side. The whole Leimert Park is threatened by this. Property owners are buying it all up. We won’t see any benefit from the rail project, because we’re being forced to move.”

By Greg Botelho and Joe Sterling

Aaron Alexis was under “the delusional belief that he was being controlled or influenced by extremely low frequency electromagnetic waves” before he embarked on a bloody shooting rampage at the Washington Navy Yard, an FBI official said.

The 34-year-old contractor, who until a few years ago had served in the Navy, spelled out this belief—with the words, “My ELF weapon” — in the sawed-off Remington 870 shotgun he brought into the military facility’s Building No. 197 on the morning of Sept. 16.

“Ultra low frequency attack is what I’ve been subject to for the last three months,” read a message obtained by federal authorities from Alexis’s thumb drives, phones and computers. “And to be perfectly honest, that is what has driven me to this.”

“This” was a shooting incident that left the Navy, Washington and the nation in shock. Alexis went on to kill 12 people that day and wound four others.

By Victor Blackwell and Devon Sayers

For the local sheriff’s department, the death of 17-year-old Kendrick Johnson is a closed book: A tragedy, but an accident.

State medical examiners concluded that Johnson suffocated in January after getting stuck in a rolled-up gym mat while reaching for a sneaker. That’s a finding his family has never accepted, and one challenged by the findings of a second autopsy they commissioned.

“I don’t believe this was an accident. I think this young man met with foul play,” said Harold Copus, now an Atlanta private investigator.

Johnson’s parents disputed the findings and won a court order to have their son’s body exhumed for another autopsy.

Additionally, another attorney said none of the imagery was believed to show whatever happened that led to Kendrick’s death, but the materials could cast doubt on the official explanation and nudge officials towards reclassifying Kendrick’s death to allow a new investigation into what happened.

Lowndes County Sheriff Chris Prine refused to discuss the case with CNN. But in June, an independent pathologist who conducted a second autopsy for the Johnson family found the teen suffered a blow to the right side of his neck that was “consistent with inflicted injury.”

They join other cities in calling on U.S. Department of Education

Accusing the Los Angeles Unified School District of destabilizing their school, parents, students, teachers and community stakeholders at Crenshaw High have joined a national coalition of activists from 18 cities across the nation to take their case to the United States Department of Education and Congress.

As part of a campaign called “Journey for Justice 2,” some 250 individuals, including representatives from Crenshaw, met with elected officials and attended a hearing by the United States Department of Education on the impact of school closures, turnarounds, phase-outs and co-locations.

Additionally, some school groups in the national coalition filed a complaint with the U.S. Department of Education against school districts around the nation under Title VI of the 1964 Civil Rights Act.

The federal government agreed to investigate six of the complaints—Chicago, Detroit, New York, Newark, Philadelphia and Washington, D.C. Crenshaw activists were exploring the possibility of filing a federal complaint as well.

At a press conference held at Crenshaw High, speakers accused the LAUSD of imposing heavy-handed, top-down transformations or reconstitutions on schools that were predominantly populated by students of color.

The national complaint alleges that reconstitutions and conversions target and disproportionately negatively impact African American students and communities as well as other students of color.