‘One Night in Miami …’ after the big Ali fight

The boxer, Sam Cooke, Malcolm X and Jim Brown come together on stage 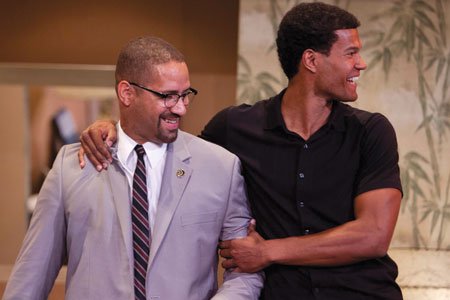 In a humorous moment, Jason Delane as Malcolm X is embraced by Matt Jones as Cassius Clay in “One Night in Miami …" Rogue Machine Theatre

I must admit, I was not really a big Muhammad Ali fan when I was young. Coming from a Catholic upbringing where quiet humbleness was next to godliness, I guess I thought him too flamboyant, loud and a braggart.

Only later did I realize that he had to build himself up, else he’d get knocked down. Nowadays, I proudly wear a T-shirt emblazoned with the classic pose of a gloved Ali taunting his fallen, stunned competitor.

That pride was further enhanced when I recently saw the embodiment of a young Cassius Clay—as Muhammad Ali was known in 1964—in “One Night in Miami …,” which is playing at the Rogue Machine Theatre through July 28.

The play’s premise has as its genesis a friendly get-together between Clay, Sam Cooke, Jim Brown and Malcolm X on the night that Clay defeats Sonny Liston to become the heavyweight champion of the world.

“Reading a book on the civil rights era, I found out there was not a party planned, because Clay wasn’t expected to win,” playwright Kemp Powers said, explaining his inspiration. “The very next morning after the fight, Clay announced he was joining the Muslim religion; he was Cassius X.”

One can surmise that it was quite a significant evening that 25th day of February in 1964. Powers has surmised some interesting dialogue as the four friends share ice cream and try to beat the Florida heat.

“Coincidentally, I read the ‘Autobiography of Malcolm X’ in high school—so compelling,” Powers said, explaining his inspiration. “Sam Cooke music was popular at that time and I became fascinated with Sam Cooke, the businessman. He had masters for his own music. He was really a trailblazer.”

“I knew Jim Brown first through films like “Three the Hard Way,” and other action and blaxploitation movies,” Powers added. “Jim had already retired 10 years before I was born. I watched a show about the greatest footballers of all time on ESPN and it was ‘Is that the same guy from the action movies?’ He was a superhero. And then, of course, everyone loved Muhammad Ali, one of the greatest boxers of all time.

“These were our Black male heroes,” Powers said. “Our icons were those four guys without question, and here they are at crucial points in their careers, all of them in the midst of a very incredible change.”

Brown called a press conference on set of “The Dirty Dozen” and officially retired from football the very next season. Cooke was killed in December of that year and Malcolm X was murdered in February 1965.

“Honestly, in reality this was probably the last night the four of them spent together,” Powers said. “This [night] was ripe for a play premise.”

Powers read books on each of the men individually and started to connect the dots of their friendships, as one biography after another would mention another member of the circle. He then wanted to include information on the nation’s transition during this historical time of the Civil Rights Movement.

“It’s important for people to see what was happening in 1964 and ’65,” Powers said. “The Voting Rights Act—a hallmark of the civil rights struggle—was passed just a few months after that night. We need no more proof of this play being contemporary than the fact that the Supreme Court just invalidated [a portion of] that same Voting Rights Act.

Powers said that he wrote the play specifically for young people.

“I remember when I first got taken to a play when I was young,” Powers said. “I went kicking and screaming, but it changed my life.”

When I met Director Carl Cofield after the play and commented on the stellar acting on stage. He shook his head and smiled.

“It was tough to get these professionals to do equity theater,” he said. “We forced these guys to practically live together. They had dinners at my house.”

A New York-based director, Cofield directed the staged reading of “One Night in Miami …” for the classical Theatre of Harlem. The brotherhood of his four actors—in character and out—comes across to the audience.

Though Cooke and Malcolm X don’t see eye to eye when it comes to the Civil Rights Movement, they join Brown in laughing at Clay’s rhymes—“I wanted to go to heaven, so I took him in seven”; and exclamations, “I’m the king of the world;” and questions, “Why am I so pretty?”

This play is an entertaining, unique slice of Black history you won’t want to miss.

“One night in Miami …” plays on various nights and weekend matinees through July 28. The performance runs approximately 85 minutes with no intermission at the Rogue Machine Theatre, 5041 W. Pico Blvd., Los Angeles. For ticket information, visit roguemachinetheater.com or call (855) 585-5185.