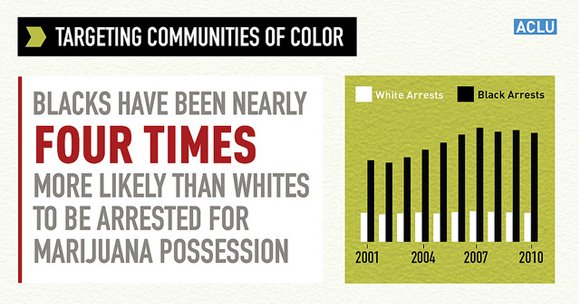 NEW YORK, N.Y. — Black people are 3.7 times more likely to be arrested for marijuana possession than white people despite comparable usage rates, according to a report released today by the American Civil Liberties Union. The report also found that marijuana arrests now make up nearly half of all drug arrests, with police making over 7 million marijuana possession arrests between 2001 and 2010. “The War on Marijuana in Black and White: Billions of Dollars Wasted on Racially Biased Arrests” is the first-ever report to examine nationwide state and county marijuana arrest data by race.

“The war on marijuana has disproportionately been a war on people of color,” said Ezekiel Edwards, director of the ACLU Criminal Law Reform Project and one of the primary authors of the report. “State and local governments have aggressively enforced marijuana laws selectively against Black people and communities, needlessly ensnaring hundreds of thousands of people in the criminal justice system at tremendous human and financial cost.”

The findings show that while there were pronounced racial disparities in marijuana arrests 10 years ago, they have grown significantly worse. In counties with the worst disparities, Blacks were as much as 30 times more likely to be arrested. The racial disparities exist in all regions of the U.S., as well as in both large and small counties, cities and rural areas, and in both high- and low-income communities. Disparities are also consistently high whether Blacks make up a small or a large percentage of a county’s overall population.

Despite the fact that a majority of Americans now support marijuana legalization, states spent an estimated $3.61 billion enforcing marijuana possession laws in 2010 alone. New York and California combined spent over $1 billion. Even though many police departments across the country have made enforcement a priority for the past decade, the aggressive enforcement of marijuana laws has failed to eradicate or even diminish the use of marijuana.

“The aggressive policing of marijuana is time-consuming, costly, racially biased, and doesn’t work,” said Edwards. “These arrests have a significant detrimental impact on people’s lives, as well as on the communities in which they live. When people are arrested for possessing even tiny amounts of marijuana, they can be disqualified from public housing or student financial aid, lose or find it more difficult to obtain employment, lose custody of their child, or be deported.”

The ACLU calls for states to legalize, regulate and tax marijuana, which it says would eliminate the unfair racially- and community-targeted selective enforcement of marijuana laws. In addition, at a time when states are facing budget shortfalls, taxing and regulating would allow them to save millions of dollars currently spent on enforcement while raising millions more in revenue – money that can be invested in community and public health programs, including drug treatment.

In the report, the organization also urges lawmakers and law enforcement to reform policing practices, including ending racial profiling as well as unconstitutional stops, frisks, and searches. It also recommends reforming state and federal funding streams and their performance measures that can incentivize police to make low-level drug arrests.