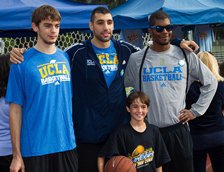 Participants from Dribble for the Cure.

Surveillance images and other materials that could shed light on the January death of a Georgia teen found inside a rolled up high school gym mat must be released to the boy’s parents, a Lowndes County judge ruled Wednesday.

“We are happy to hear we are one step closer to the truth,” Kendrick Johnson’s father, Kenneth Johnson said after the hearing.

A state medical examiner ruled Kendrick, a high school athlete, suffocated after getting stuck in the gym mat. His parents —who believe he was murdered—disputed the findings and won a court order to have their son’s body exhumed for another autopsy.

The materials to be released by the judge—photographs from inside the gym at Lowndes County High School, surveillance video from outside and investigative documents—are unlikely to prove what happened to the boy, attorney Chevene King said.

None of the imagery is believed to show whatever happened that led to Kendrick’s death, King said.

But the materials could cast doubt on the official explanation and nudge officials towards reclassifying Kendrick’s death to allow a new investigation into what happened, King said.

“Essentially, it shifts the focus from what the sheriff had offered to other theories that were not explored and that have, I think, begun to slowly creep to the surface,” King said after the hearing.

Last week, a lawyer for Lowndes County High School told CNN that surveillance footage from the gym shows other teens were inside around the time Johnson died.

The school district and sheriff’s office had refused to release some of the materials, citing state law that exempts the release of “education records of a minor child.”

CNN filed a motion last week to join the family’s lawsuit seeking investigative files related to the case, including the surveillance records. The motion was granted.

Kendrick’s parents will be among those who will review the images.

You can’t prepare yourself for it,” Kenneth told reporters. “It’s just something we have to do. We’re fighting for Kendrick to the end.”

By Michael Pearson and Victor Blackwell