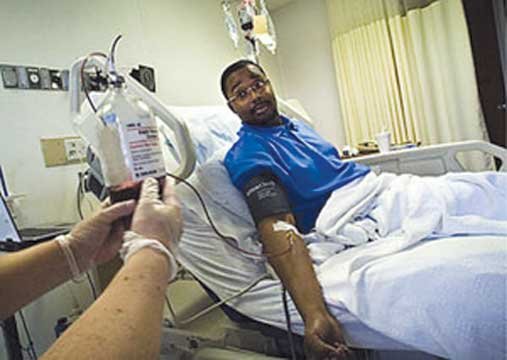 Half of patients in a clinical trial have safely stopped immunosuppressant medication following a modified blood stem-cell transplant for severe sickle cell disease, according to a study in the July 1 issue of the Journal of the American Medical Association External Web Site Policy. The trial was conducted at the National Institutes of Health’s Clinical Center in Bethesda, Md., by researchers from NIH’s National Institute of Diabetes and Digestive and Kidney Diseases (NIDDK) and the National Heart, Lung, and Blood Institute.

The transplant done in the study reversed sickle cell disease in nearly all the patients. Despite having both donor stem-cells and their own cells in their blood, the patients stopped the immunosuppressant medication without experiencing rejection or graft-versus-host disease, in which donor cells attack the recipient. Both are common, serious side effects of transplants.

“Typically, stem-cell recipients must take immunosuppressants all their lives,” said Dr. Matthew Hsieh, lead author on the paper and staff clinician at NIH. “That the patients who discontinued this medication were able to do so safely points to the stability of the partial transplant regimen.”

In sickle cell disease (SCD), sickle-shaped cells block blood flow. It can cause severe pain, organ damage and stroke. The only cure is a blood stem-cell, or bone marrow transplant. The partial transplant performed in the study is much less toxic than the standard “full” transplant, which uses high doses of chemotherapy to kill all of the patient’s marrow before replacing it with donor marrow. Several patients in the study had less than half of their marrow replaced.

Immunosuppressant medication reduces immune system strength and can cause serious side effects such as infection and joint swelling. In this study, 15 of 30 adults stopped taking the medication under careful supervision one year after transplant had not experienced rejection or graft-versus-host disease at a median follow up of 3.4 years.

“Side effects caused by immunosuppressants can endanger patients already weakened by years of organ damage from sickle cell disease,” said Dr. John F. Tisdale, the paper’s senior author and a senior investigator at NIH. “Not having to permanently rely on this medication, along with use of the relatively less-toxic partial stem-cell transplant, means that even older patients and those with severe sickle cell disease may be able to reverse their condition.”

According to Dr. Hsieh, “One of the most debilitating effects of sickle cell disease is the often relentless pain. Following the transplant, we saw a significant decrease in hospitalizations and narcotics to control that pain.”

The partial transplant used donor stem-cells from healthy siblings. It effectively reversed SCD in 26 of 30 patients and allowed them to achieve stable mixed donor chimerism, a condition in which a person has two genetically distinct cell types in the blood. The study includes patients from an NIH study reported in 2009, in which partial stem-cell transplants reversed SCD in 9 of 10 people.

In the United States, more than 90,000 people have SCD, a genetic disorder found mainly in people of African ancestry. Worldwide, millions of people have the disease.

“The devastating complications associated with sickle cell disease can deeply affect quality of life, ability to work and long-term well-being,” said NIDDK Director Dr. Griffin P. Rodgers, a co-author on the paper. “This study represents an important advance in our efforts to make a potentially transformative treatment available to a wider range of people, especially those who could not tolerate a standard stem-cell transplant or long-term use of immunosuppressants.”

More information on sickle cell disease is available at: http://www.nhlbi.nih.gov/health/dci/Diseases/Sca/SCA_WhatIs.html and http://diabetes.niddk.nih.gov/dm/pubs/hemovari-A1C.