Child adoption: One of life’s most unexpected miracles 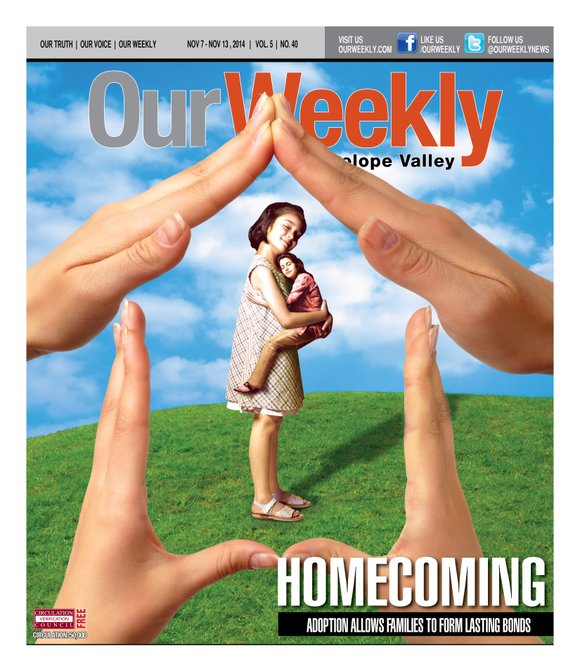 Adopting a child can be one of the most momentous events to ever bless a household. Every year in the United States, tens of thousands of infants, toddlers and teens are welcomed into warm and supportive families. Los Angeles County is one of the nation’s leading regions for adoption as the Department of Children and Family Services (DCFS) embarks yearly to find loving homes for those who simply need a guiding hand navigating a previous life sometimes devoid of joy and hope into one that promises familial love and kindness. Inner Circle Foster Care and Adoptions Services in Palmdale is one of the county’s many adoption agencies.

With November serving as National Adoption Month, the need for permanent family structure is more vital than ever. Adoptive parents provide their prospective sons and daughters with the security and stability of a safe environment, and also offer an opportunity for youth to learn, grow and achieve their full potential. Every year the Adoption Division of the DCFS hosts festivals that are designed to provide an informal, relaxed and playful environment in which to introduce pre-qualified prospective parents with so-called “hard-to-place” children in the foster care system. Last year out of the approximately 185 families and the 261 children that attended these county-wide gatherings, about 115 children were matched with families as a direct result of attending one of the festivals. Some successful matches included up to seven children being adopted by one set of parents, thereby ensuring that the siblings will grow up together in the same home. This year the DCFS has hosted seven “Operation Children” events, including a Black Adoption Festival in June.

The DCFS operates another independent adoption program in which the birth parents select the family for the child and places the child directly with the selected family. (There are many reasons why birth parents put a child up for adoptions including poverty; and age of the parents—in the United States for example, people under 18 who give birth are generally not considered a legal guardian of the infant.) This procedure involves the birth parents having direct and previous knowledge of the prospective new parents; the DCFS is not involved in the initial placement of children in independent adoptions. The organization does educate the prospective adoptive parents and the birth parents regarding the laws pertaining to their rights in an independent adoption. Extensive research is undertaken by the DCFS to ensure the safety of the children, as well as provide referrals to various community resources to strengthen families thereby helping to prevent children from entering the welfare system.

The United States does not have a central source for tracking the number of adoptions that occur each year. However, data published in 2009 by the Child Welfare Information Gateway, an organization under the auspices of the U.S. Department of Health and Human Services (HHS), suggested that about 136,000 children were adopted in the United States the previous year in all types of adoptions, including foster care, inter-country and private baby adoption scenarios. Although the number of adoptions has increased, the adoption rate per every 100,000 American adults (persons 18 years and older who became adoptive parents) has actually decreased, falling from 61.5 percent in 2000 to 58.3 percent in 2008, representing a decline of about 5 percent. Adoption from foster care accounted for 41 percent (55,300) of all 2008 adoptions; in 2000 foster care adoptions accounted for roughly 40 percent of all adoptions. Adoptions in California in 2008 accounted for a little more than 12,000 cases, including all private, public and inter-country adoptions. Last year there were about 104,000 children in the nation’s foster care systems who were ready for adoption, according to the website Adoptuskids.org.

The HHS reported that, nationally, there were about 407,000 children in foster care at the start of 2012. By their standards, it is considered “unusual” in most states for adoptions to occur in less than 12 months from the child’s entry into foster care. Overall, national performance on timeliness of adoptions has improved, but it continues to be a challenge for most states. Specifically, placement of children in foster care longer than 12 months has been a difficult chore for many states to reverse.

Maltreatment of children before and once in foster care is also a major concern. Children who experience maltreatment—either at home or in out-of-home care—can experience a wide variety of consequences ranging from physical and mental health problems, to issues with cognitive development and academic achievement. States continue to experience challenges finding permanent homes for children with disabilities, and for children who entered foster care when they were older than 12 years. The 2009 HHS report found that many states are making progress in their efforts to find permanent homes for children in foster care in long before age 18.

A Child Welfare Outcomes report, issued in 2011 through the HHS, found that many states with a relatively high percentage of foster care re-entries also had a high percentage of children entering foster care who were adolescents (12 years and older). The HHS suggested that these states develop better strategies that target the needs of these so-called “difficult-to-place” youth.

There are many reasons why persons adopt a child, but the most common may include the fact that there are one in eight American couples who cannot conceive because of infertility. Some women have medical reasons that make it unsafe to carry a child through pregnancy. Additionally, some single persons desire to be a parent. Childless persons from the LGBT community sometimes must adopt to become parents. Also, people who opt for adoption may prefer this method to start or expand their family.

One hundred years ago, placing a child for adoption was a secretive process because women were looked down upon, if they had premarital sex. All adoptions then were closed, and there was a great deal of shame associated with adoption because it was considered by most people to be taboo. As a result, most women who placed their children for adoption went to maternity homes or shelters operated by religious organizations. These women were usually unable to select the adoptive family or have any control over the amount of information and contact.

However, old judgmental beliefs like those are largely gone. Today, the woman who places a child for adoption often maintains 100 percent control over the process and can create a customized adoption plan, including selection of the family as well as choosing how much contact she wants with the family before and after placement. Adoption Planners, an organization that specializes in adoption counseling, planning and placement, says that adopted children placed through modern adoption methods may thrive more today because the placing parent(s) and adoptive parent(s) have the opportunity to get to know one another during the pregnancy and can share important information and create a more nurturing enviornment for the child.

An ABC News report from March indicated that there are major price differences in relation to the race of the child being adopted. An average couple seeking to adopt a White baby in the United States may pay as much as $50,000, whereas a couple looking to adopt a Black baby may be charged as little as $5,000 in some states. Some adoption professionals said the reason for the difference in cost for adopting a White baby as opposed to babies of other races or ethnicities is that there are fewer White infants available, and there is much more demand for them. The online site “Love Is Enough” this year culled some figures that may indicate some racial bias in adoption preferences. They found that 88 percent of respondents said they would “accept” a White baby, 33 percent said they would accept a South American or Hispanic baby, 28 percent said they would take an Asian baby, while 14 percent said they would adopt a Black baby.

The wait for a healthy White infant is often more than two years because there are so many prospective parents unwilling to adopt a baby of color. The processing time for adoption of a Black baby can be as short as six months, according to the ABC News report. Apparently in most states, when you fill out adoption paperwork, if you state that you are open to adopt a baby of any race, the chances are very high that you will be matched with a child of color.

Washington state has a law that bans direct payments to a birth mother for placing a child for adoption, but the regulation does not address payments for arranging an adoption or the fees that may be charged. The practice of charging prospective parents different fees depending on race is reportedly commonplace among private adoption facilitators. Oddly, White babies in some cases may be victims of discrimination because of the exhorbantly high price attached to them. White couples, particularly those who can afford the high adoption fees for a White baby, may not be used to considering themselves victims of discrimination.

Sean Lance is director of American Adoptions, which has a fee structure that results in prospective parents paying more to adopt White babies than to adopt Black babies. He said the practice is not designed to be discriminatory. “The difference is in the cost of the process—living expenses, medical expenses. Our agency fee for all adoptions is identical.”

Any mother who qualifies for Medicaid or other financial support that pays their living expenses while they’re carrying their babies sometimes have these expenses covered by state aid—even the cost of delivery. The outstanding costs are therefore paid by the prospective parents of the baby. In some states, the birth mother’s living expenses can also be passed on to the adoptive parents, and that, says Lance, can create a disparity in cost for different adoptions. If a birth mother does not have other support, laws in some states allow the cost of her rent, maternity clothes and food to passed on to the couple seeking to adopt her child. Lance said sometimes it can cost prospective parents “about $19,000 to $35,000” to adopt non-Black (i.e. White, Hispanic, Native Indian or any non-African American combination of races) healthy newborns and infants via the “traditional programs.” Within American Adoptions’ “minority program,” prospective parents can expect to pay an average of $8,000 to $15,000 for an African American baby. Lance said the difference between the costs for Black and non-Black babies is explained by the “subsidies to help offset the costs of these adoptions” and also because more advertising (incentives for more non-African American women to place their child into the adoption process) is needed to find non-Black babies.