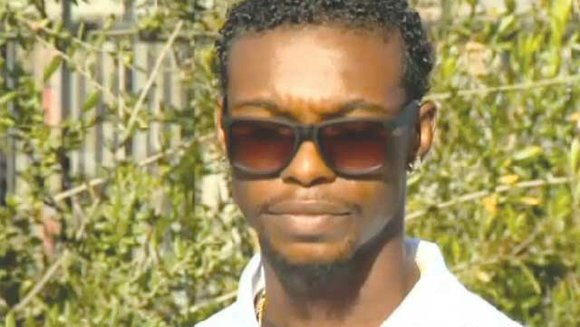 An LAPD officer this week was charged with one count of assault under color of authority in the beating of a man in South Los Angeles.

Officer Richard Garcia, who has entered a not guilty plea, was videotaped allegedly beating and kicking a man who was being held down during an October 2014 arrest on Avalon Boulevard near 55th Street.

The footage of the arrest was captured by a private security camera and showed Garcia assisting several other officers in the process of arresting Clinton Alford Jr., 22, who was reportedly riding his bicycle on the sidewalk. Alford was initially arrested on suspicion of drug possession and resisting arrest, but prosecutors with the district attorney’s office later declined to pursue charges. Garcia’s bail has been set at $35,000. If convicted, he could face a three-year jail sentence.

One source told the media that Garcia reportedly kicked Alford in the head like “a football player kicking a field goal,” while another source said that Alford’s shoulder was kicked and not his head.

Alford allegedly matched the description of a robbery suspect. A statement from the district attorney’s office revealed that after a car pulled along side Alford, a man shouted a command to stop, but Alford continued pedaling because the man hadn’t identified himself as a police officer. When officers caught up with Alford, security video reportedly showed him voluntarily lying on the ground putting his hands behind his back. Garcia was then seen getting out of another patrol car and proceeding to stomp and kick Alford. He was also tased in the back with Alford later saying his body “flopped like a dead fish.”

“I was just praying to God that they wouldn’t kill me,” Alford said. “I felt that I was going to die. Then I passed out.”

A source familiar with the incident said a series of blows followed the tasing, including several Garcia made with his elbows to the back of Alford’s head and upper body. The source also said it wasn’t until Alford was put in the patrol car that the officers appeared to notice the security camera on a nearby garment factory, according to the source who saw the recording. The officer who kicked Alford then knocked on the door of the building, then disappeared inside.

In a federal lawsuit, Alford insisted that he did not resist the officers and was not “given warning that police were attempting to detain or arrest him.” On Monday, Alford told the media that he hoped Garcia would lose his job. The lawsuit states that Alford has reportedly suffered “mentally, physically and emotionally” and is worried about retaliation by law enforcement.

Garcia is one of three LAPD officers facing assault under color of authority charges in connection with on-duty incidents caught on camera. Jonathan Lai, 31, was charged last year after he allegedly hit a man with a police baton outside a restaurant near Staples Center in 2012.

Prosecutors said footage from the restaurant’s security camera showed the man was on his knees, with hands on his head, when Lai reportedly struck him repeatedly.

Mary O’Callaghan, 49, was charged in a deadly 2012 incident involving a woman arrested in South LA. Patrol car footage showed the veteran officer kicking Alesia Thomas in the stomach and groin when the woman was in handcuffs and leg restraints, prosecutors said. Thomas, a 35-year-old mother, lost consciousness in a patrol car and was later pronounced dead at a hospital.