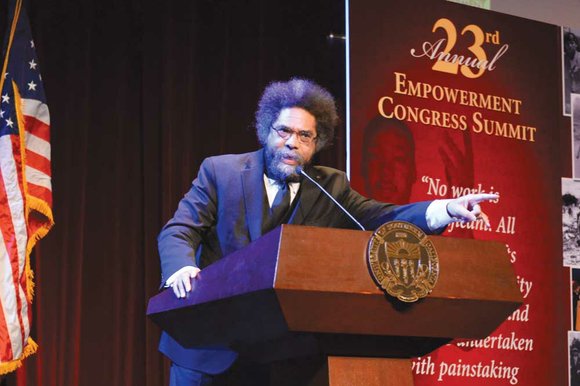 Justice is indivisible. Injustice anywhere is a threat to justice everywhere. And wherever I see injustice, I’m going to take a stand against it whether it’s in Mississippi or in Vietnam.”

“No one can do everything, but everyone can do something,” Secretary of State Alex Padilla added in his comments before he introduced a clip from the movie “Selma,” in which Anne Lee Cooper (portrayed by Oprah Winfrey) tries to register to vote.

“A decade before we started the Empowerment Congress, I had a dialog with professor West about a project to build community,” Ridley Thomas said. “We were in discussion after the ‘94 riots.”

Since the start of the congress 23 years ago, members have been empowered to work toward the rebuilding of Martin Luther King Jr. Community Hospital and a light rail station at Leimert Park.

“We had to work hard to convince people that it wasn’t a revolutionary idea to have a hospital in South Los Angeles,” Ridley-Thomas said. “In about five months, I’ll be inviting you to the grand opening of Martin Luther King Jr. Community Hospital.”

West, who currently serves ’94 a professor of philosophy and Christian practice at Union Theological Seminary and Professor Emeritus at Princeton University, served as keynote speaker at the 15th anniversary of the congress.

“The spirit of the occasion is just so sweet,” West said. “You can’t have an empowerment congress without militant tenderness in the mix.”

During his 20-minutes at the podium, the subject of incarceration was one West touched on: “The new Jim Crow;” soul music: “We taught the world something about love,” and the state of the union: “More than 40 percent of our children of color live in poverty in the richest nation in the world. It’s a public disgrace.”

Ridley-Thomas mentioned that it isn’t unrelated that the Empowerment Congress is grounded in the fundamental principles that Martin Luther King sought to articulate. And although King’s name came up frequently at the event, which took place during the holiday weekend that bears his name, West reminded the audience that the civil rights leader was a human being.

“But Martin Luther King is not to be sanitized, serilized or Santa Claus-ified,” West said.

The theme for the summit, “50 Years Later: Chaos or Community? Educate, Engage, Empower,” was in part based on a title from one of Dr. King’s books “Where Do We Go From Here: Chaos or Community?” And although a good number of youth participants had only read about King and the Civil Rights Movement in history books, they attended the summit in force.

At 19, Morgan Towler isn’t much older than the youth she chaperoned, but the L.A. Trade Tech College child development major joined in the workshop exercises. Youth were asked to “Turn Up for Justice,” by defining justice, identifying injustice issues in their neighborhoods and come up with potential solutions.

“I’m honestly so amazed,” Towler said about her workshop experience. “I’m into enlightening our generation. If they don’t know the real, then they’re just following Instagram and reality TV and will never be able to live up to their full potential.”

Youth were asked not to let (Saturday) be the last time they talk about community issues, even though it’s some times difficult to be the one to make the situation uncomfortable.

“I hope everyone leaves with a little seed of encouragement to get out and be the one to make a difference,” Towler said. “To turn a negative into a positive.”