Stroke can strike at moment’s notice, but there are ways to prevent tragedy 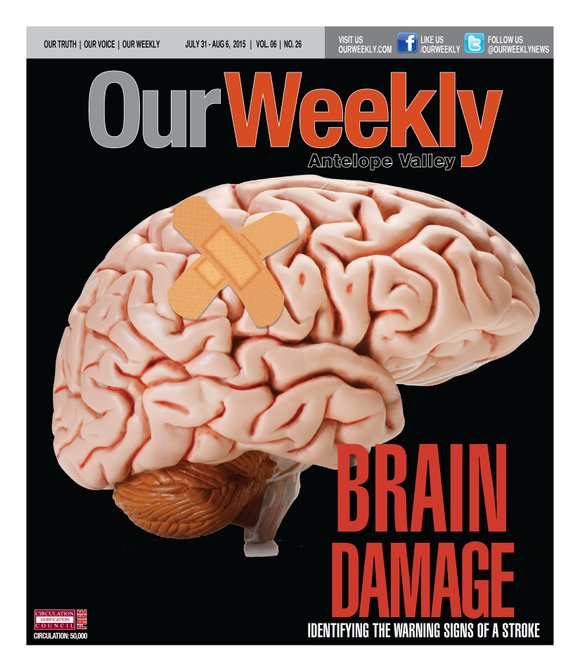 It appears to strike out of nowhere. You have a sudden headache with no known cause. Your vision gets blurry, and you feel drowsy and nauseous. A little later, you may have trouble speaking and an arm or a leg is suddenly weaker. These are the early signs of a stroke, and at this point, you must immediately call 911.

These early warning signs, while not experienced by everyone, are a clue that you have had a medical event. There has been an interruption of oxygen and nutrients to the brain.

Other indicators of a stroke include sudden confusion, a loss of balance and coordination as well as in some cases, seizures. Even if these symptoms pass quickly, they are important indicators that require immediate medical attention. Not in an hour, but immediately. Not after you finish this or that, but now. The radio spots by the American Stroke Association (ASA) may say it best: “Time lost is brain lost.” The organization says that every 45 seconds someone has a stroke in the United States; someone also dies of a stroke every three to four minutes.

Sometimes these early symptoms may last only a few minutes and then disappear. This type of brief episode is known as transient ischemic attack (TIA or mini-stroke). Neurologists say there is really no way to tell whether the symptoms are from a mini-stroke or a major stroke. That’s why a prompt evaluation—recommended hopefully within 60 minutes—is necessary to identify the cause of the stroke and to determine appropriate therapy. And even if the symptoms appear to diminish, a serious problem caused by the TIA is not going to go away without medical help.

The ASA reports that 80 percent of strokes are the result of a clot (ischemic strokes) and the rest are due to bleeding in the brain (hemorragic stroke). Warning signs of a stroke need not precipitate a panic attack, but do require quick thinking. For instance, because a stroke can impair the ability to speak or understand speech, the ASA suggests a quick test: Repeat the phrase “You can’t teach an old dog new tricks.” If you are slurring words, using the wrong words or are unable to speak, there is a 72-percent chance that you’ve had a stroke.

When a person is experiencing a stroke, it is common for an arm or leg (or both) to suddenly weaken, go numb or become paralyzed. Often the affected limb(s) is on the side of the body opposite from where the stroke occurred in the brain.

Another tip is to extend both arms (palms up) for 10 seconds. If one arm drifts downward, that may indicate muscle weakness, which is a sign of a stroke. Also, recline in a chair and, with both eyes open, lift each leg separately until they are parallel to the ground. If you cannot lift each leg one at a time, you may have had a stroke.

The ‘worst headache’ ever

Most of the time, however, it is a severe headache—the worst you’ve ever had—which is the most common stroke symptom. Then there is the “droopy “ face. Sudden, one-sided facial weakness can be a sign of a stroke. When paramedics arrive to treat a possible stroke victim, they will often ask a person to smile or show their teeth. If one side of the face sags or doesn’t move, that is a signal to them identifying a stroke. Even hiccups—usually a minor nuisance—can occur when a stroke affects the brain’s breathing center. As well, sudden breathlessness or heart palpitations are further signs of a possible stroke.

Race is no specific identifier of stroke victims, but some persons may be more susceptible than others. The American Heart Association (AHA) convenes a stroke statistics subcommittee which produces estimates and facts about stroke and other cardiovascular diseases in the United States. In 2009, the subcommittee revealed that 5.3 percent of Native Indians were affected by a stroke that year, followed by 3.2 percent of Blacks, 2.5 percent of Whites and 2.4 percent of Asians. In 2011, the ASA revealed that each year about 700,000 people suffer a stroke, with 500,000 of those medical emergencies being a person’s first brain attack. The remaining 200,000 are repeat strokes.

African Americans are also disproportionately affected by obesity. The Centers for Disease Control and Prevention (CDC) says that, among non-Hispanic Blacks 20 years and older, 63 percent of men and 77 percent of women are overweight or obese. Since obesity is often related to hypertension (resulting from an historically salty, fatty diet), being overweight can increase the chances of a stroke.

Then there is diabetes, a disease that African Americans are reportedly more likely to have than non-Hispanic Whites. Medical experts have found that persistently elevated blood glucose levels contribute to the buildup of plaque (a pasty substance composed of cholesterol, calcium, cellular waste and protein) that can stick to the walls of blood vessels and interfere with blood flow, increasing the chances of a clot and potentially leading to a stroke.

There are several types of stoke, all of which fall under the risk factors of high blood pressure, diabetes and smoking. The ASA reports that ischemic stroke accounts for 87 percent of all strokes; the remaining 13 percent are hemorragic strokes. But there are other types. Men, for instance, are reportedly 61.5 percent more likely to suffer what is called a thrombotic stroke (the interruption of blood flow to a part of the brain due to slow formation of a blood clot), and 23.5 percent more likely to suffer an embolic stroke (occurring when a blood clot or mass of cholesterol plaque wanders into the brain and becomes trapped inside an artery). The ASA says that thrombotic stroke accounts for 59 percent of brain accidents in women, while cerebral embolus accounts for 26.2 percent.

Young people often believe generally that strokes only happen to elderly people. That’s a myth. In 2012, the CDC reported that while it is true that as people get older, the risk for stroke may increase, research has indicated that there is an increasing number of stroke victims between the ages of 18 and 65 years. Strokes are not rare among that population.

Researchers are still trying to find out how to decrease the risk of stroke in people under 45; this group reportedly doesn’t typically have the risk factors of older people. A study conducted in 2009 at Purpan Hospital in Toulouse, France found that stroke patients and healthy patients—all under 45 years—had similar levels of total cholesterol, but pinpointed low levels of the “good” (high-density lipoprotein or “HDL”) cholesterol in stroke patients. The results suggested that having your cholesterol measured regularly may be a good indicator of whether you’re at risk for a stroke prematurely.

The CDC has revealed that more than 6 million Americans have had a stroke, making it the fourth leading cause of death in the United States. Strokes are preventable. Dr. Igor Rybinnik, an assistant professor of neurology at the Cushing Neuroscience Institute in Manhasset, NY, cites an International Stroke Study from 2011 that reveals that 90 percent of strokes can be attributed to vascular risk factors such as high blood pressure, diabetes and obesity “... all of which are preventable to a large extent,” Rybinnik said. Experts contend that if you’re not able to contact medical personnel immediately after stroke symptoms appear, keep trying. Specifically, if it is a TIA stroke—and the symptoms last just a few minutes—heeding them and getting treatment can save your life.

“The notion that strokes can’t be prevented is a giant myth,” Rybinnik explained. “It was once believed that you can’t treat a stroke ... there’s nothing doctors can do. That is another myth. If a person contacts medical personnel within four hours of the onset of stroke symptoms, we can give a clot-busing medication called ‘tissue plasminogen activator’ that may prevent or possibly reverse damage that would have been done by a stroke.”

Years ago, stroke victims in the Antelope Valley had to travel up to 60 miles into the city of Los Angeles to receive treatment. That’s no longer necessary. Antelope Valley Hospital is certified by the Joint Commission as a Certified Primary Stroke Center. It now provides the most advanced stroke care and rehabilitation services with a team of certified neurologists and nurses.

The Joint Commission created the Primary Stroke Center Certification Program in 2003 to address this important health issue. The Joint Commission’s certification processes and standards are used at many hospitals nationwide, and offers an evidenced-based, standardized method of delivering care, customizing treatment and intervention that both meets the patients’ needs and also shares information with providers to offer the best care possible.

In 2009, Los Angeles County Department of Health Services, in conjunction with the AHA, established a stroke quality improvement initiative designed to make significant advances in stroke treatment. Dr. Jeffrey Saver, chairman of the Los Angeles Stroke Stakeholder Committee and director of the UCLA Stroke Center, said there have been many medical advances in the methods of prevention and care for stroke victims. To date, Los Angeles County operates 35 approved stroke centers.

“It is very gratifying to see the enormous progress in acute stroke care,” Saver said. “This success reflects the efforts of stroke champions at all of the hospitals. We can now provide faster treatment and that results in better patient functional outcomes and fewer complications, including death.” Sayer added that the first critical step after the patient or family recognizes that a stroke has occurred is to call 911. The medical community has even adopted a simple acronym—F.A.S.T.—that will remind the victim or an observer of stroke: “Facial drooping,” “Arm weakness,” “Speech difficulties” and “Time.” All of these aspects, Saver explained, should be recognized and acted upon immediately. “This can be an easy way of remembering the warning signs of a stroke,” he said.

If it has been longer than 60 minutes, a potential stroke victim should immediately go to a medical facility or doctor’s office.

All of the previously-cited medical organizations attest that if you quit smoking, limit alcohol, eat more fruits and vegetables, reduce your weight and blood pressure, and keep your blood sugar in check, you will significantly lower your risk for stroke.

Also make the time to exercise even if you break it into two 10-minute sessions a day. Walking a total of two hours a week can cut your stroke risk by 30 percent.

A positive daily attitude can work wonders in reducing stroke risk. Limit stress as much as possible. In 2011, Prevention magazine looked at a study of more than 80,000 women found that and being depressed made them 29 percent more likely to have a stroke. Why? The study found that depressed women (and men) tended to smoke, drink, and eat more ... and exercise less.

While preparing meals, use olive oil for sautéing, baking and frying. Olive oil has been found to help lower the risk of a heart attack, and new research has discovered that it can help reduce the chance of stroke by just over 40 percent.

And if you’re someone with a “short fuse,” a study in the journal “Hypertension” suggests that angry and aggressive people may be at a higher risk of stroke. Researchers found that people who scored high for antagonistic traits on a standard personality test had greater thickening of the arteries (a risk factor for stroke) compared with people who were more “mellow.”

For more details about stroke prevention, contact the Los Angeles County Department of Health Services for a referral to the nearest certified stroke center, or call Antelope Valley Hospital at (661) 524-2005.