Serena Williams: Pound for pound, the greatest ever

As she cements her place in history, when will she get her proper respect? 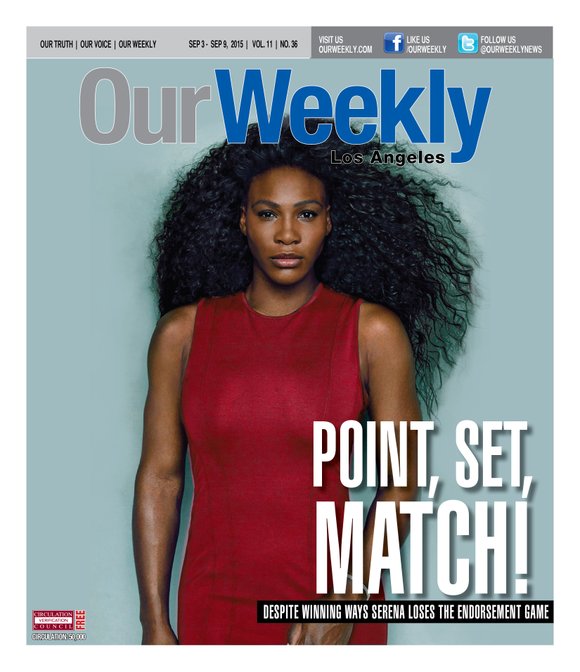 Serena Williams is on the verge of putting her face on the Mount Rushmore of sports.

With the U.S. Open beginning, Williams is getting close to ending any argument about who is the greatest female tennis player, and she is only one Grand Slam title away from tying Steffi Graf for having the most championships in the Open Era.

Williams has become so big within the tennis world that for the first time ever, the U.S. Open’s women’s championship match sold out before the men’s event. She is by far the biggest draw in the sport. But even with all of her accomplishments, not to mention her impact on the game, Williams, as a Black woman, still takes a back seat to her White counterparts when it comes to earnings.

While Williams has been a bigger draw than either, it can be said that comparing her to the male headliners of the sport is like comparing an apple to a walnut; mainly because sports are typically dominated by men. But that point would not hold up when Maria Sharapova is factored in. She is the third highest earner in tennis at $27.1 million, which includes $22 million coming from endorsements.

Sharapova has been regarded as the second best female tennis player over the past few years, well behind Williams. But Sharapova pockets $10 million more in overall earnings. Williams has 21 Grand Slam titles compared to only five for Sharapova, and the numbers are even more skewed in Williams’ favor, when they face each other.

In 20 career head-to-head matches, Williams holds an 18-2 lead, including winning the last 17 matches. Over the course of that winning streak, Williams has won 34 sets to Sharapova’s three, and Williams is on a 14-set winning streak.

The statistics demonstrate that Sharapova is not on Williams’ level in any way, so why is there such a huge disparity in enorsements?

There appears to be a race issue here, but it may be deeper than that, believes experts. Michael Jordan did not have the same issue. And LeBron James is the current endorsement leader in the NBA. Tiger Woods’ endorsement figures have dwarfed his competitors, who are mostly White. So it appears to be more than simply a Black vs. White issue, say some critics.

“There is a factor of both race and gender,” said legendary African American sociologist Harry Edwards, Ph.D. “I think that there is a particular type of image and so forth that many organizations and potential sponsors have in [mind in] terms of the women that they want as the face of their products. And I think that there’s no question that those images, those expectations do not always favor African American women.”

Edwards continues, “I think that the combination of race and gender have put Serena and Venus both at a disadvantage relative to some of the other women who are playing tennis and other women athletes in general. [These other women] are nowhere near the stratosphere that [the Williams sisters] exist in, in terms of actual athletic abilities, capabilities, championships, demonstrative athletic superiority and so forth. So there is no question in my mind that race and set traditions of gender images play a role in this situation.”

While women’s sports have grown by leaps and bounds in terms of participation since Title IX was created in 1972, sports are still dominated by men, and they are generally judged primarily by their athletic abilities. This is not the same for women, where having a certain look, or being viewed as a sex symbol, can be the difference between becoming a mainstream star or just being another athlete competing in what could be considered fringe sports. While Black men generally find both Venus and Serena Williams attractive, the sisters may not fit the tastes of people outside of the Black community.

Edwards explains that the media plays a role in creating an image of Black women as being masculinized, tough, aggressive, almost “man-like.”

“Since Venus and Serena are athletes, they fall into that category,” Edwards said. “The image of the masculinized, super strong, almost castrating Black woman has been one of the images that they have been trying to overcome. I think that corporate America is a major role player in continuing to project and accept those type of characterizations of Black women.”

There have been many social media comments that allude to Williams’ body as being man-like, and she has been a victim of body shaming (derision), while Sharapova fits what many believe to be a more “feminine” body image. But that may not make much sense, according to Edwards.

“Despite the fact that you have White folks running around getting butt implants, collagen lip injections, lieing under tanning machines trying to get dark, all kinds of stuff, trying to look like Black women, they refuse to look at Serena as the extremely gifted and dominant athlete that she is.”

Generally in sports, the greatest athlete in a given sport is the biggest draw, which is true in Williams’ case. And the biggest draw racks in more endorsement money. By that logic, Williams should make more money than all of the other women tennis players combined, and she should be the top overall earner, male or female.

“Serena Williams should be right up there in the group of the greatest athletes of the last quarter century in this country,” Edwards said. “I’m talking about up there with Michael Jordan; up there with Tiger Woods; and up there with Kobe Bryant. I’m talking about great athletes. She is right there in the mix. But because she’s an African American woman, every thing tends to be moused down in terms of endorsement opportunities, and in terms of the credit that she deserves for the athlete that she is.”

Pound for pound, Williams’ accomplishments are as great as any other athlete, agrees Edwards and others. When it comes to tennis, she is only one title behind Graf. On the men’s side, she is four titles ahead of Federer, who has the most men’s Grand Slam titles with 17.

Within the tennis world, Williams has forced her way into the conversation as being the greatest ever.

“I think she’s the greatest,” said Fred Williams, who along with his brother Richard, coached the Williams sisters at Rancho Cienega Park when they were children. “Everybody is saying that now, all of them. John McEnroe, and many of the other TV announcers are finally giving her credit. Because they have to. If you put her up against other top players throughout history, she would have beaten all of them.”

Serena Williams had two matches against Graf, back in 1999 when Williams was 18 years old and Graf was 34. The two split the matches. Seeing that Graf struggled with a young and upcoming Williams, it would be hard to believe that she would defeat a more mature Williams.

Fred Williams believes that her longevity is one of the reasons why she is the greatest ever, male or female. At the age of 34, when most tennis players are well past their prime, she continues to dominate her opponents as she is racking up Grand Slam titles at a historic rate.

“Now Federer is still out there at the age of 34, but is he No. 1? And he hasn’t won a Grand Slam in a few years,” Williams said. “Serena is still there. She’s nearly 6,000 points ahead of her closest opponent.”

There are very few athletes in sports history who have dominated their oppositions in the way that Williams has, which makes it hard to understand why she has not received the credit she deserves.