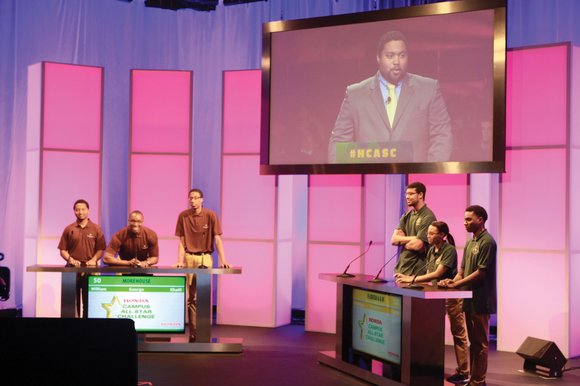 FAMU defeated Morehouse College and Chicago State University defeated North Carolina Central University in the semi-finals to make it to the championship round.

Nearly 200 students participated in the academic tournament, which was held April 2-6 at Honda’s Torrance campus.

Since 1989, more than 100,000 students from around the country have competed in the tournament and more than $7.5 million has been awarded to the schools for books, tuition, scholarships, facility upgrades and other investments.

“Honda is proud to support HBCUs because of the unique and critical role they play in higher education, helping millions of students achieve their dreams,” said Steve Morikawa, vice president of corporate relations and social responsibility at American Honda.

Preparation for the tournament begins in the fall, when students take “Power Search” quizzes to identify the academic “superstars” at each school. Campus tournaments lead to the formation of the teams. Practice sessions are held by a faculty coach, with an emphasis on knowledge acquisition and team building. In December, the coach selects the varsity team. Finally, in January, teams attend national qualifying tournaments after which, the “Great 48” teams are selected.

HCASC alumni span the U.S. and world abroad, with varied career paths – doctors, teachers, lawyers, engineers, scientists, architects, writers, military and government officials, business leaders, artists, and more. They share an enthusiasm for learning and always remember their HCASC experience and the lasting friendships made during the tournament.

For more information about the HCASC, visit their website at www.hcasc.com.