Heart disease can be prevented, treated once you know signs, precautions 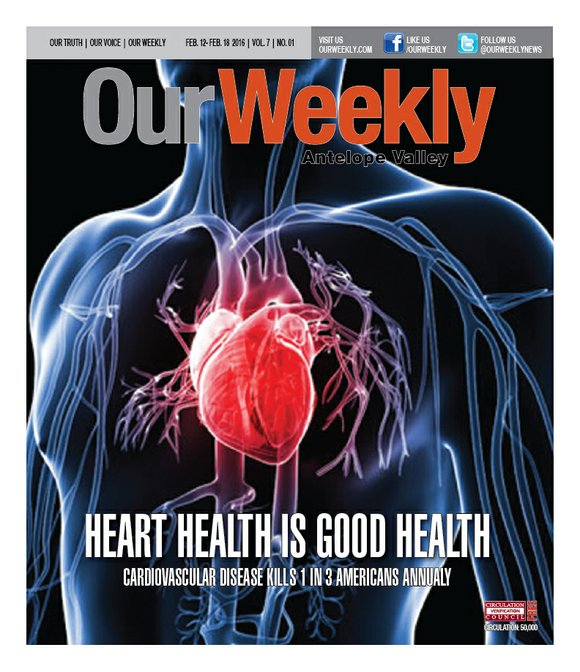 Cardiovascular disease remains the leading cause of death for American men and women. Heart disease, as it is more commonly referred to, kills one in three Americans (about 800,000 people) every year most often by manifesting itself in sudden and unforeseen ways. The nation spends billions annually on heart disease as cardiologists and general practitioners continually stress that the often deadly health condition must be addressed with utmost urgency.

Almost half of Americans face increased risk of heart disease for reasons that include smoking, high blood pressure, high cholesterol, improper diet coupled with lack of exercise (obesity), and often a family history of the condition. The Los Angeles County Department of Health Services (DHS) reports that more than one in four adults is at significant risk of heart disease and resulting stroke. At least 1.7 million county residents (about 28 percent of adults) have two or more of the five modifiable risk factors for heart disease (hypertension, diabetes, smoking, obesity and physical inactivity) and may not know it.

The Centers for Disease Control and Prevention (CDC) estimates that, nationally, about one in six healthcare dollars is spent on cardiovascular disease. Families who experience heart disease have to deal with not only medical bills, but also lost wages and a real possibility of a decreased standard of living. It was once believed that heart disease was a primary threat during old age, but that is no longer the case. About 150,000 Americans under age 65 die each year from heart disease. All totaled, heart disease kills roughly the same number of Americans each year as cancer, lower respiratory disease (including pneumonia) and accidents combined. As recently as 2013, heart disease cost the nation an estimated $320 billion in healthcare costs and lost productivity. If you add stroke to the equation, which is closely aligned with heart disease, that dollar amount jumps to $475 billion a year.

Heart disease, to a large degree, is preventable but you must be aware of the risk factors. Even those persons with present multiple risk factors can get on the road to good health and that means eating right, exercising more, reducing stress, regular checkups and, above all, no smoking.

Heart attack, of course, is the first thing that comes to mind when discussing heart disease. Some heart attacks are sudden and intense, but most begin slowly with mild pain and discomfort. Often people believe this is merely minor indigestion and do nothing more than take an antacid, or sometimes they are confused by the uncomfortable condition and simply do nothing and wait for the pain to subside. The DHS points to specific signs that you may be experiencing a heart attack, including:

—Chest discomfort. Most heart attacks involve discomfort in the center of the chest that lasts more than a few minutes, or that goes away and comes back. It can feel like uncomfortable pressure, squeezing, fullness/indigestion or mild to moderate pain.

—Discomfort in other areas of the upper body. Symptoms can include pain or discomfort in one or both arms, the back, neck, jaw or stomach.

—Shortness of breath. This may occur with our without chest discomfort.

—Other signs of heart attack may include breaking out in a cold sweat, nausea or lightheadedness.

Locally, Antelope Valley Hospital (AVH) is among the leading facilities in Los Angeles County in the research and treatment of heart disease. Last year, the hospital became the first accredited chest pain center in the Antelope Valley with recognition coming from the Society of Cardiovascular Patient Care. Two years ago AVH opened its comprehensive Institute for Heart and Vascular Care (IHVC) which is located on the hospital campus.

The clinic provides an evidence-based, protocol-driven approach to cardiac patient care and allows clinicians to dedicate specific time to treatment during the critical early stages of a heart attack. Such facilities are recognized in better monitoring of patients when it is not initially clear whether or not the patient is experiencing a coronary event.

“As the first hospital in the area to receive this prestigious accreditation, the AVH team is proud of its unique and extensive expertise in caring for heart attacks and related conditions,” said Sameh Gadallah, M.D., a cardiologist and medical director of the IHVC. Gadallah said early response to cardiac patients is of the utmost importance, specifically because this action relates to the treatment and care of persons experiencing chest pain. The center also emphasizes public awareness of heart attack symptoms because the earlier someone can recognize this life-threatening situation, the better the opportunity there is to receive accurate, effective treatment.

The IHVC offers expertise in a number of areas within cardiovascular care, including: assessing, diagnosing and treating patients quickly; integrating the emergency department with local emergency medical technicians (EMTs); treating patients at “low risk” for acute coronary syndrome, and supporting community outreach programs that educate the public to promptly seek medical care if they display symptoms (or witness symptoms) of a possible heart attack. Also, AVH is classified as a STEMI (Symptoms/Treatment Elevated Myocardial Infarction) receiving center, meaning that it has the training, equipment and processes in place to immediately treat patients experiencing a heart attack. As well, the hospital’s Advanced Primary Stroke Center works in conjunction with the IHVC to provide care based on the latest research and standards to foster better outcomes for stoke patients who often suffer from heart disease.

“Chest pain requires immediate action,” said Michael Gertz, M.D., who works in the AVH emergency room. “Call 911 and get to the hospital at the first sign of chest pain. We have the latest expertise and equipment to quickly diagnose a person’s condition and provide life-saving treatment, but you must be proactive and get early medical attention as soon as you experience chest pain ... even if you think it’s merely indigestion or common heart burn.”

The American Heart Association (AHA) reports that it takes just four to six minutes after cardiac arrest before a person experiences brain death and then, complete death. The survival rate outside a hospital is reportedly less than 1 to 2 percent while immediate medical attention can significantly increase the chance of survival.

The CDC reported in 2013 that every year about 740,000 people will have a heart attack. Of these, roughly 530,000 are a first heart attack with the remaining 210,000 occurring in people who have already had a heart attack. Ethnicity plays no particular part in who is more susceptible to heart disease because the condition is equally common among Whites, Blacks and Latinos. For Native Indians or Alaska Natives, Asians and Pacific Islanders, heart disease is second only to cancer as the leading cause of death. Research conducted by the CDC found that, from 2010-2012, death rates due to heart disease were highest in the South and lowest in the Western regions of the country.

High blood pressure, high cholesterol and smoking are key risk factors for heart disease. About half of Americans (47 percent) have at least one of these risk factors.

Officials at both the CDC and the AHA say that knowing the signs and symptoms of a heart attack can save a life. In 2007, a CDC survey found that 92 percent of respondents recognized chest pain as a symptom of a heart attack. Only 27 percent of these respondents were aware of all major symptoms and knew to call 911 when someone was having a heart attack. About 47 percent of sudden cardiac deaths occur outside a hospital, a finding that may suggest that many people with heart disease don’t act on early warning signs, according to the CDC.

Contrary to popular belief, a heart attack is not necessarily cardiac arrest—they’re two different events. A heart attack occuras when the organ is steadily weakened over time and eventually blood supply to the heart muscle stops and dies. Cardiac arrest occurs when the heart suddenly stops pumping due to an electrical problem in the heart. Further research from the AHA reveals that a more stress-free lifestyle—void of negative emotions and depression—can reduce the chance of heart disease and/or stroke. All medical experts contend that age is the most significant risk factor for developing heart disease, followed by gender, family history (coupled with ethnic background) and the aforementioned personal habits and health dynamics (i.e. smoking, obesity, diabetes, high cholesterol, high blood pressure). However, chest pain may not be obvious because people with diabetes, older adults and some women may not always experience the classic symptom of upper-body distress during a heart attack. Such persons are more likely to suffer from shortness of breath, nausea, back pain and/or jaw pain. As well, women who smoke and use oral contraceptives may increase their risk of heart disease and stroke several times when compared with nonsmoking women who use oral contraceptives.

Cardiologists tend to refer to the morning period as the “witching hour” for heart attacks, because most people suffer a heart attack early in the day. Apparently, stress hormones like cortisol tend to peak just after rising. Also, blood is thicker and harder for the heart to pump because a person is often partially dehydrated after six to eight hours of no fluid intake. Researchers suggest that people who stay up late may be more prone to heart disease even if they regularly get eight hours of sleep. An AHA study conducted in 2010 found that women who slept five hours or less a night were 39 percent more likely to develop heart disease than women who got eight hours of sleep. This lack of sleep is often related to unhealthy stress or even mental fatigue. Hypertension is said to increase the risk of coronary artery disease (atherosclerosis) and the condition usually has no symptoms and not only damages the heart, but can also have negative consequences for kidneys and the brain.

There are many things a person can do to reduce the chance of heart disease. Foremost are adhering to a healthy diet and a regular exercise regimen. The AHA offers these tips for long-term benefits to your health and heart:

—Use up as many calories as you take in, meaning that you should remain aware of how many calories you should be eating and drinking to maintain your weight. Be sure to exercise each day; just 10 minutes of daily physical activity three to four times a week can help you reach physical and cardiovascular fitness.

—Eat a variety of nutritious foods from the different food groups. Although you may have a healthy appetite, your body may not be receiving the nutrients it needs to be healthy. Strive for a healthy balance of minerals, protein and whole grains which help to maintain your weight, “good” cholesterol and healthy blood pressure.

—Drink alcohol in moderation (for women it’s no more than one drink per day, and for men no more than two drinks daily).

—Stop smoking now. Avoid second-hand smoke as well. The AHA website has a complete list of diet and lifestyle recommendations which could result in a “new you” for 2016.