Exploring the history of Black nuns 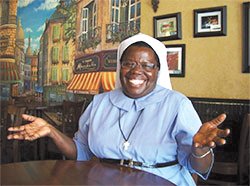 “If you are silent about your pain,

They will kill you,

And say you enjoyed it.”

During Black History Month, there are a lot of pioneers, heroes, inventors and artists we remember. And every year, we learn more about our history, gaining more pride through that knowledge.

One pioneer we may never have celebrated before is coming to light in “Subversive Habits: The Untold Story of Black Catholic Sisters in the United States,” a book being developed by Shannen Dee Williams, Ph.D.

When admission to enter a convent was rejected, some early African American catholic pioneers resorted to founding their own communities. A number of such Black religious communities existed in New Orleans, LA; Loretto, KY; and Savanna, GA.

Mother Mary Lange, who in 1828 founded the oldest Black Catholic sisterhood, The Oblate Sisters of Providence in Maryland, is being considered for beatification and canonization in the Roman Catholic Church.

Lange was born Elizabeth Lange around 1794 in Santiago de Cuba, where she lived in a primarily French speaking community. She received an excellent education and in the early 1800s left Cuba and settled in the United States. By 1813, providence directed her to Baltimore, Md. where a large community of French-speaking Catholics from Haiti was established.

But many Black women had no desire to cross the Mason/Dixon line.

“How many vocations were lost because of distance?” asked Williams, who describes herself as a “Cradle Catholic,” raised from birth in the faith. However, it wasn’t until she stumbled upon an article detailing the 1968 formation of the National Black Sisters Conference (NBSC) that she found her calling.

“We have to be committed in telling our stories,” Williams said. “We have to collect our oral histories.”

Williams is an assistant professor of history at the University of Tennessee at Knoxville. She teaches courses in U.S. African American, women’s, religious, and civil rights history.

Since reading about the NBSC, she has interviewed more than 85 nuns and a number of Black women who were kept from entering a religious community because of exclusionary policies. Research for Williams’ forthcoming book has not been easy, because a lot of documentation was purged from archives; or records were not kept at all.

“Many of these women received oral rejections from teachers or counselors, leaving no written records of the event,” Williams said.

Some sisters were instructed by their superiors to pass for White or Latina. They were told not to reveal themselves (ethnically) to students. It was not until the Civil Rights Movement and the Second Vatican Council that things began to change, said Williams.

“Catholic sisters attended the voting rights marches in Selma,” Williams said. “And then, after King’s assassination, they held the National Black Sisters Convention in Pittsburg.”

This was a watershed, conscience-raising event, Williams said. “There were eight sisters who came from Chicago.” They didn’t even know about each other until they went to Pittsburg.”

Some superiors wouldn’t allow their Black nuns to attend the event, but others relented.“When one Black nun was allowed to go, she said ‘I’ve never seen a Black sister before,” Williams said.

“They had to walk her in front of a mirror. ‘Who do you think you see in the mirror every day?’ they asked.”

But the young woman had become who she saw every day–the teacher, the religious devotee–not the Black girl.

Sherrill Adams is an example of what happened to many Black catholics. She wanted to become a nun at 18, but her vows were delayed because of her political activism during the Civil Rights Movement. She endured bullying, harassment and verbal abuse on a 24-seven day basis in her community.

“Some sisters steadfastly refused to dine with her,” Williams said. Then, at age 30, Adams suffered a heart attack. Not one of her fellow sisters visited her in the hospital. She left the order soon after.

In some convents, Black nuns were forced to use separate facilities and take communion separately from their White counterparts. “They (convents) were strongholds of segregation,” said Williams, noting that the number of Black sisters did not add up to more than one percent of the total nun population in the United States. At its peak around 1965, there were about 1,000 African American sisters, Williams said, but there are only about 300 today. 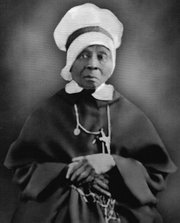 “There was a sharp decline between 1965 and 1975,” Williams said, adding that she’s found that some Black women who were denied entrance into communities the 1950s and 1960s are applying again now.

“Sisters are the face of the Catholic church, they run the schools and the hospitals. These are courageous women, ” said Williams of the Black women who chose this path. In fact, Williams said her resesearch found that nine historically Black orders were founded, of which three still survive—and Black women founded two other orders that were predominantly White. She also notes that Black women have been a part of the Catholic tradition since the beginning of the church.