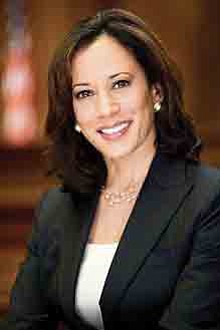 On the Nov. 8 ballot, in addition to helping elect the next leader of the free world, California voters have a lot of other issues to address.

“The California voters guide is 244 pages long,” California Attorney General Kamala Harris said during a recent breakfast meeting with local clergy. “Get prepared. There’s a lot at stake in this race.”

One of the clergy stood to let everyone know that Harris is on page two of that voters guide.

“And definitely get to page two,” she said with a smile.

As a former criminal prosecutor, eight-year San Francisco District Attorney and the current top cop in the most populous state in the nation, Harris has been working on increasing transparency, reducing recidivism & focusing on root causes of crime for a long time. And now she is running for a seat in the U.S. Senate to do the same on a national level.

Looking at the current state of the justice system across the county, the task could be overwhelming.

“We have to encourage our community,” Harris said. “Do not despair. Don’t throw up your hands when it’s time to roll up your sleeves.”

As the many clergy assembled there in the Delancy Street Foundation ballroom, Harris thanked them for the good work they do in the community.

“When people are attacked, either fight back or recede,” she said. “I think many people are receding. Many are not aware of their power. We are challenged to empower all of the people.”

Rabbi Joel Simonds of University Synagogue and a member of the commission on Social Action in the Union for Reform Judaism mentioned that it is always good to pray in a room with windows, so the outside world is remembered and included.

“We have the blessing of freedom to be able to choose our elected officials,” Simonds said to Harris. “We thank you for your vision of justice.”

Rev. J. Edgar Boyd, pastor for First AME Church supported Harris in her District Attorney campaign when he was based in San Francisco and introduced the Attorney General to the attendees.

“She is experienced with 12 years of elected public service,” Boyd said. “She is prepared; has traveled this country to the Mexican border (where she did not put up a wall); and she is the best person to represent California in the Senate.”

Harris deliberately chose the Delancy Street Foundation location for the breakfast to illustrate her dedication to the reentry community—those persons coming out of incarceration and working to integrate back into society.

“We all know nothing stops a bullet like a job,” Harris said.

The Foundation got its start in San Francisco and the Los Angeles residential educational center, located on Vermont Avenue, trains, counsels and houses nearly 300 residents.

“We will all make mistakes,” Harris said. “And for some, those mistakes rise to a level of crime. But a civil society allows individuals to earn their way back.”

The morning conversation included clergy sharing their resources and ideas. Harris was very interested in learning more about the re-entry program from the City of Refuge, which is led by Elder Joe Paul.

“We have got to reform the criminal justice system,” Harris said. “Previous choices have been to be soft or hard on crime, but it has not included being smart on crime.”

Harris believes that the focus should be on encouraging innovation across the system; crime prevention; recidivism reduction; inclusive police recruitment from all backgrounds; and additional law enforcement training.

“We need a system that inspires trust,” Harris said, relating her desire to create a federal open criminal justice data portal where everyone can evaluate the performance of their own community criminal justice system.

“In order to heal the system,” Harris said. “We need to deal with three Ts: we need to speak truth; we need transparency; and get to trust.”

“The noise about the residential has has sucked up all the oxygen in the room,” Harris said. “But we have a lot at stake in this race.”