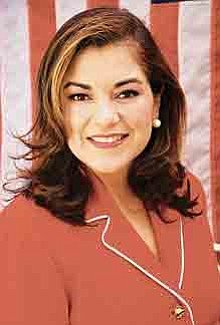 Rep. Loretta Sanchez is hoping to take her 20-year political career to the next level with a seat in the U.S. Senate. A Democrat, Sanchez faces off against California Attorney General Kamala Harris, also a Democrat. They were the two leading candidates in the open primary.

Sanchez said her political career shows she is the best person for the job.

“Voters should elect me to be California’s next U.S. senator because I am the most qualified for the job,” said Sanchez. “I have the experience and proven record to bring strength and independence to the California delegation. I am not part of the establishment and will always vote for what’s best for California, not what is best for Washington.”

Although Sanchez is a U.S. representative, she hasn’t forgotten her humble beginnings.

“My parents came to this country speaking almost no English, and without much money in their pockets,” she said. “My father was a union machinist and my mother was a teacher. I was a Head Start child and know the importance of education and providing quality education to all people. I was able to go to college with a combination of Pell Grants, union grants, and my MBA was paid for with a scholarship provided by the Anaheim Rotary Club. I am proof of what can be achieved when America invests in its people.”

As a child of immigrants, Sanchez is acutely aware of the need for immigration reform.

“Comprehensive immigration reform is the moral imperative of our nation and it will be the first issue I take on, if I am elected to the United States Senate,” Sanchez said. “As co-chair of the Immigration Task Force, I have been fighting on the front line to provide recourse for undocumented immigrants. It has been almost two years since Congress has brought meaningful immigration reform up for a vote. Nearly $1.4 trillion in GDP growth is at stake, and $850 billion in deficit reduction is at stake. Most importantly, the quality of life of the 11 million illegal immigrants currently living in this country is at stake, which is why I am a strong supporter of the DREAM Act and DACA (Deferred Action for Childhood Arrivals).”

According to Sanchez, water will continue to be a pressing issue in California. She wants to pass legislation that will allow California to become water independent.

“In my district, 90 percent of water is recycled through the Groundwater Replenishment System, a keystone project I help to secure funding for which is revered and studied by countries all over the world.”

Another issue that the senate will have to deal with is the ongoing War on Terror and overseas conflicts. These are issues that Sanchez has been involved with. She has traveled to both Iraq, Afghanistan and other volatile regions.

“I have lived with and seen up close and personal what our men and women in the Armed Forces do and the dangers they face every day. I have personal relationships with key foreign leaders across the globe and a proven ability to represent U.S. interests when it matters. I know what kind of generals, ambassadors and executive leaders our senate should confirm.”

Sanchez can also work with both parties.

“I work with both sides of the political aisle,” she said. ”This is proven by my list of endorsements from both Democrats and Republicans. I have served on some of the most important committees, including House Armed Services as a ranking member, the House Committee on Homeland Security and the Joint Economic Committee.”