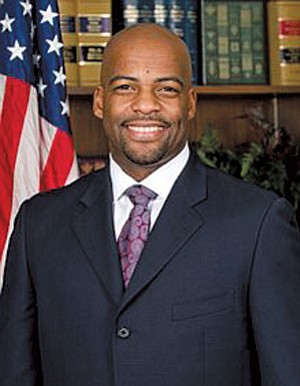 State Sen. Isadore Hall said he first went into politics to right wrongs in his community. He has a track record of proposing legislation to effect positive change, such as proposing laws that led to the first “green” football stadium, building a new senior center in Compton and sponsoring legislation that would ensure equal pay for people of color and women.

Hall first started in politics with a seat in 2001 on the Compton Unified School District Board of Trustees. He also served on the Compton City Council and in the California Assembly before moving up to the Senate.

Hall said he is particularly proud of his wage legislation.

“It’s the most robust wage equality bill in the nation,” Hall said. “No person of color or woman should be paid less than their White counterpart.”

As a native of Compton, which is located in the 44th district, Hall is aware of the problem of gun violence in the community. That is why he sponsored SB 880, which regulates firearms.

“It’s the most robust gun legislation in the country,” Hall said.

Also recognizing the importance of having good-paying jobs, Hall has sponsored legislation that would raise the minimum wage to $15 per hour. He also wants to boost career and technical education programs in high school, so children who decide not to go to a four-year college can still make decent wages.

Hall said his legislative record is the reason why voters should elect him to represent the 44th District. He is running against Nanette Barragan, also a Democrat, to replace Janice Hahn, who is running for a seat on the Los Angeles County Board of Supervisors.

“I’m proud to give Sen. Isadore Hall my enthusiastic support,” said Hahn in a statement provided to Roll Call. “As the incumbent State Senator and former Assemblyman for much of this district, Isadore has represented many of the communities within the 44th District for years.”

Hall says he has a string of endorsements from several local civic groups, the California Democratic Party and Gov. Jerry Brown.

He decided to run for Congress because he saw the ground swell of support for his campaign.

“I ran because of my community,” Hall said.“They urged me to run because (they felt) I was the most qualified.”