Armed and Black: One woman’s guide to God and guns 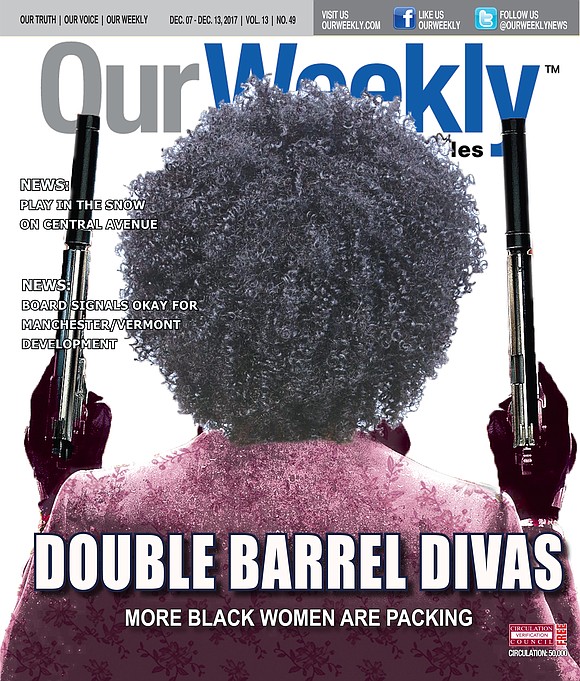 Sheila “Mother” Drake is a self-described “potty-mouth,” a reformed alcoholic, a widow, avid churchgoer, and a Gemini. She came up with the idea of revealing her zodiac sign in the opening paragraph to “let everybody know” one thing...

“I’m crazy as the day is long,” she deadpanned. “My body may be tired and worn, but my trigger finger gets a lot of exercise.”

On Tuesdays and Thursdays each week, around noon, Sheila pays a visit to the IHOP located between Manchester Avenue and Sepulveda Boulevard. She usually orders buttered toast, hard scrambled eggs and two rounds of unsweetened coffee.

“That’s my fuel - so I don’t get tired when I’m at the range,” she explained. “All that shooting takes a toll on me.”

The LAX Firing range attracts thousands of gun enthusiasts and thrill seekers from all walks of life. It’s where Sheila goes to exercise her Second Amendment right, a liberty she was first introduced to by her father and elder brothers in rural Mississippi during the 1940s.

“My granddaddy was a freed slave,” Sheila recalls. “Living in the south, his life was always in danger, and since he couldn’t be out in public with a gun, he would let White folk treat him any ol way. He kept a shotgun under his bed in case the family needed protecting.”

She continued, “I have 10 siblings - and my father taught us all how to shoot, how to load a pistol, how to clean it. I guess it’s cause he watched his father walk on pins and needles around White folk.”

After losing the Civil War, Southern states quickly adopted the Black Codes, laws designed to reestablish White supremacy by dictating what the freedmen could and couldn’t do.

In January 1866, Harper’s Weekly reported that in Mississippi, such groups had “seized every gun and pistol found in the hands of the (so called) freedmen” in parts of the state. The most infamous of these disarmament posses, of course, was the Ku Klux Klan.

In response to the Black Codes and the mounting atrocities against Blacks in the former Confederacy, the North sought to reaffirm the freedmen’s constitutional rights, including their right to possess guns.

Gen. Daniel E. Sickles, the commanding Union officer enforcing Reconstruction in South Carolina, ordered in January 1866 that “the constitutional rights of all loyal and well-disposed inhabitants to bear arms will not be infringed.”

When South Carolinians ignored Sickles’s order and others like it, Congress passed the Freedmen’s Bureau Act of July 1866, which assured ex-slaves the “full and equal benefit of all laws and proceedings concerning personal liberty … including the constitutional right to bear arms.”

Despite this controversial decision, efforts were still made to disarm African Americans, culminating with  the 1967 Mulford Act, which was supported by California Gov. Ronald Reagan and the  National Rifle Association (NRA) in an attempt to inhibit the gun rights of the Black Panther Party.