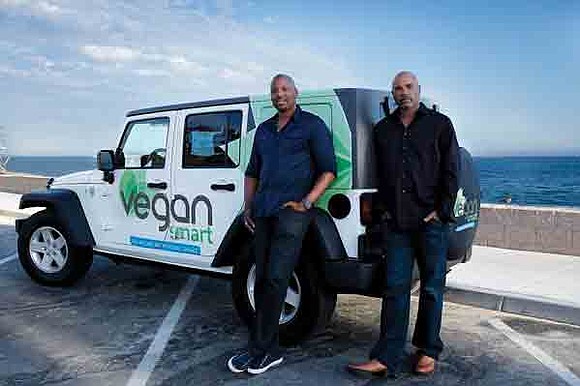 Kareem Cook and Claude Tellis, are two entrepreneurs, who are on a mission to save more black lives by changing the way African Americans eat. Cook and Tellis are the owners of VeganSmart, a health food company that makes a vegan nutritional shake.

According to Cook, VeganSmart was launched in 2014, and it falls into line with their goal of getting Black people to be more conscious about their diet. Cook said too many Black people are dying or losing limbs from preventable diseases.

“We want to attack prediabetes and diabetes in underserved communities,” he said. “VeganSmart is an all-in-one meal replacement that can be taken at breakfast. It contains 20 grams of all plant-based proteins, and other vitamins and nutrients.”

VeganSmart is available at major retailers such as Whole Foods, Walgreens, CVS, the Vitamin Shoppe, Sam’s Club and on Amazon. The supplement initially proved popular with people interested in healthy living and yoga, but is now being marketed toward a younger demographic.

“It needs to be marketed towards the hip-hop community the way high-end goods have been,” said Tellis. He argued that Black people are more likely to be diagnosed with diseases like diabetes and that’s the reason why they need to be conscious about their diet.

Both Cook and Tellis are advocates of a plant-based diet which can reverse health problems such as diabetes and improve the quality of life of many Black Americans. They realize that going totally meat free is a difficult process which needs to be approached incrementally.

“We are trying to incorporate it more (into our lives,)” said Cook. “We realize how clean being a vegan is, but how hard the lifestyle is.”

Cook and Tellis are part of increasing number of Black people who are transitioning to a plant-based diet. Rapper and actor Common used to be a vegan and is now a pescetarian, and hip-hop entrepreneur Russell Simmons wrote about his experiences becoming a vegan in the book “The Happy Vegan.”

However, this is not the first time Cook and Tellis have been involved in a major health initiative. Cook said they were previously involved in a company that provided healthy products to vending machines at Los Angeles schools. The pair became involved in the project after meeting a teacher at Venice High School who was concerned that the school cafeteria was serving Domino’s Pizza. Cook and Tellis worked with a coalition to eventually get junk food banned from Los Angeles schools. They also later met with President Bill Clinton and former Arkansas Gov. Mike Huckabee.

Their healthy food initiative was much like the program promoted by first lady Michelle Obama, which encourages schools to serve children healthier meals. And like the former first lady, Cook and Tellis’ project also received some pushback.

Cook said they were able to reach out to children by tapping into what the youth perceived as cool. They were able to get school athletes to support eating healthy and they also brought in Michael Ealy and the cast of “Barber Shop” to promote the program.

“Being cool and preserving your life, those are motivating factors,” Cook said.