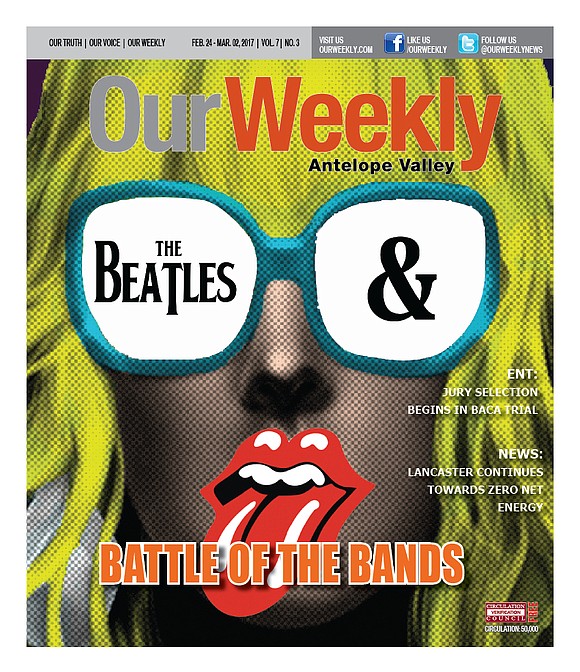 From the hottest comedian on the circuit, to classic theater and musical trips down memory lane, the Lancaster Performing Arts Center for the next few weeks promises some of the Southland’s best entertainment choices.

For fans who wish to relive the British Invasion—when mop tops and mini skirts were all the rage—then tonight’s “Beatles vs. Stones: A Musical Showdown” review is for you. There has always been a debate about which of these two legendary musical groups was the most popular. While the Beatles relied more so on melodic love songs, the Rolling Stones were a more blues-influenced band. Either way, both groups were composed of some of England’s finest musicians who applied their respective take on American pop music. The show stars Abby Road, one of the nation’s finest Beatles tribute bands that offers brilliant musicianship and authentic costumes, facing off against Satisfaction—The International Rolling Stones Show that presents faithful renditions of some of the music and style of Mick Jagger, Keith Richards and the bad boys of London. 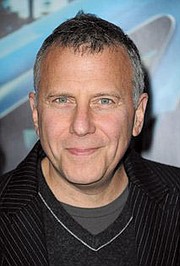 A battle of the bands

Similar to the friendly “battle of the bands” competition between the Motown groups the Temptations and the Four Tops, tonight’s show will feature individual performances of some of the favorite songs of the two groups who are separated only by a couple of years; the Beatles formed in Liverpool (1960) and the Rolling Stones in London (1962). While each band maintained a distinct trademark throughout the 1960s, there were similarities between them in covering American rock ‘n roll and rhythm and blues. Chuck Berry served as their common denominator because both groups recorded early versions of his classic songs “Roll Over Beethoven,” “Carol,” “Memphis, Tennessee,” “Little Queenie” and “I’m Talking About You.”

The Beatles’ version of “Roll Over Beethoven” appeared on their second album with George Haririson on lead vocals and lead guitar. The Rolling Stones recorded the song at a BBC session in 1963 with Mick Jagger’s vocal providing a more cutting, blues tone and the tempo a bit more frenetic than the Beatles’ version. Keith Richards’ blues-inspired solo is noteworthy. With “Carol,” the Beatles recorded an expected top-flight version in 1963 on the BBC and is said to have a more forward-thrusting groove with John Lennon on lead vocals. “Carol” was the highlight of the Rolling Stone’s first album in 1964 with a pushy buzz and authoritative Richards guitar licks that gave it a slightly rougher edge than the original version.

“Memphis, Tennessee” is a song that helped forge the longevity of rock ‘n roll, became one of Johnny Rivers’ biggest hits, and was a tune that both the Beatles and the Rolling Stones recorded for the BBC. The Beatles’ 1962 audition for Decca Records featured “Memphis, Tennessee” with Lennon on lead vocals and Pete Best on drums in what would be one of his final gigs before being replaced by Ringo Starr. The next year, the Rolling Stones did a version for the BBC with Jagger on lead vocals and intricate guitar work shared by Richards and Brian Jones. The Rolling Stones version of “I’m Talking About You” (retitled “Talkin’ Bout You”) is generally more familiar than the Beatles cover. It appeared on their 1965 “December’s Children” album in America, and on “Out of Our Heads” in the United Kingdom. John Lennon handled the vocals on the Beatles’ version with Harrison providing the guitar solo. An interesting aspect of the Beatles’ 1963 version was that Paul McCartney took the base lines from “I’m Talking About You” and applied them to arguably to the Beatles first original song to achieve worldwide acclaim, “I Saw Her Standing There.”

“Little Queenie” has been a band favorite since its debut in 1959. Over the years, everyone from Jerry Lee Lewis to REO Speedwagon have recorded it, and the Beatles and Rolling Stones were no exception. Most critics say the Rolling Stones 1969 version of “Little Queenie” is superior to the Beatles because they slowed the tempo down slightly and made it a bit more funky and salacious which was keeping with the band’s change in approach by the late 1960s. The Beatles performed the song frequently during early club dates and featured McCartney on lead vocals and the familiar Harrison guitar solo.

“Money,” the Barrett Strong-Barry Gordy song that helped to put Motown Records on the map, was also recorded by both English groups with the Beatles including it on their second album, and the Rolling Stones adding it to their “Hot Rocks” compilation from 1974 (it first appeared as a single in the UK in 1964). Another song, “I Wanna Be Your Man,” is more familiar to Beatles fans but their record was actually released about a month after the Rolling Stones version in 1963.

The band your parents loved to hate

Fans of both groups can remember a significant change in their respective appearance by the end of the 1960s. At one time, however, the Rolling Stones briefly mimicked the Beatles’ look with matching outfits and hairstyles. Their first manager, Andrew Oldham, cut the personnel from six members to five thereby omitting keyboardist Ian Stewart, and decided to present the group as the “anti-Beatles” by toughening up their image and suggesting they act more surly and defiant. Not long after, the Rolling Stones would become “the band your parents loved to hate” or as Jagger once commented, “The Stones came to be portrayed as dangerous, dirty and degenerate, and I encouraged my charges to be as nasty as they wished to be. We were very much the antithesis of the Beatles.”

Paul Reiser will perform March 4 at 8 p.m. Television sit-com fans will remember Reiser from the popular “Mad About You” in which he and Helen Hunt portrayed a young married couple taking on the ups and downs of commitment and career. Reiser is an accomplished comedian, actor, television writer, author and musician who for the past 30 years has appeared in several Emmy- and Oscar-winning projects. Comedy Central has voted him as one its “Top 100 Comedians of All time.

This fall, Reiser produces and appears on “There’s ... Johnny!,” an eight-episode series for Seeso where he’ll partner with David Steven Simon as they intersperse classic footage from “The Tonight Show Starring Johnny Carson” with the coming-of-age story of Andy, a wide-eyed 19-year-old Nebraskan who stumbles into a job on the iconic show.

Tickets to see Paul Reiser in concert range from $34 to $59.

The Irish Rovers will bring about 50 years of traditional Celtic tunes to the stage at 8 p.m. March 11. The group has charmed and entertained audiences around the world with their “anthems of revelry and joy,” a mischievous blend of Celtic-flavored, traditional folk and popular music. With St. Patrick’s Day approaching, organizers at LPAC suggest you pick up a “green” pint at Zelda’s, 750 West and enjoy the iconic sounds of the Emerald Isle.

The group has recorded more than 40 albums including its latest “The Irish Rovers, 50 Years;” this concert is part of a final world tour before they scale back their worldwide touring schedule for more intimate performances.

Take a trip back to the 1950s and early 1960s with the Doo Wop Project at 8 p.m. March 17. The show traces the evolution of doo-wop from the classic sound of five guys singing tight harmonies on a street corner to the biggest hits on AM radio. The members of the group move audiences along the journey from the original foundational tunes of the Crests, Dion and the Belmonts, the Flamingos, the Pinguins, through the sounds of Smokey Robinson and the Miracles, the Temptations, and Frankie Valli and the Four Seasons. You’ll even hear songs made famous by Michael Jackson, Jason Miraz and Amy Winehouse.

The Doo Wop Project is composed of present and past members of the Broadway hit shows “Jersey Boys” and “Motown: The Musical” who bring unparalleled authenticity and vocal excellence in recreating—and in some cases entirely reimagining—some of the greatest American pop songs of all time.

“Fiddler on the Roof” is a musical theater tradition and is scheduled for three performances at 8 p.m. April 28 and 29, and a 2 p.m. matinee on April 30.

The winner of nine Tony Awards, three Academy Awards and a pair of Golden Globe Awards, this audience favorite tells the story of a family living in a Jewish shtetl in Russia in 1905. With the constant threat of pogroms in the background, Tevye, the family patriarch, struggles with the marriages of his three daughters. His first daughter, Tzeitel, is assigned by the village matchmaker to marry a wealthy man—much older than she—named Lazar Wolf. Tzeitel wants to marry her childhood friend, Motel, who is young like her but also very poor, like her. Before the marriage, Motel confronts Tevye with his proposal, something not ordinarily done in Jewish households at the time. But Teyve is impressed by the young man’s spirit, and eventually tricks his wife into thinking that Wolf’s wife has appeared to him in a dream threatening disaster, if Tzeitel marries Wolf. So, the two childhood friends get married.

Next is daughter Hodel who falls in love with a young Marxist revolutionary named Perchick. These two decide to get married, but Perchick also wants to join the revolutionary front thereby leaving his young bride alone. Teyve will not hear of it and forbids the wedding only to find out that the young couple is not asking for his permission, but only his blessing.

The third daughter, Chava, falls in love with a Russian Gentile who had saved her from the abuse of his companions. These two elope, and this marriage proved to the “last straw” for Tevye who promptly disowns Chava and vows to never speak to her again. All of this prompts the mother to give her daughter the blessing.

The one, the only Lewis Black

To understand Lewis Black, you need go no further than the acronym for his fan club “Frustrated Union of Cynical Kindreds Universal.” The self-styled angry man of comedy will bring his hilarious routine to the stage at 8 p.m. May 6.

Lewis Black may be the most in-demand stand-up comic in the past 20 years. He has appeared numerous times on the late-night TV talk show circuit, but he is more than simply a funny man. Black is a former playwright-in-residence at New York City’s West Bank Cafe and, during the 1980s, oversaw the development of more than 1,000 projects including works by Aaron Sorkin (“The West Wing”), Alan Ball (“American Beauty”) and his own original plays. Black served as MC of these shows and as the popularity of the West Bank Cafe grew, so did his stand-up act.

Black’s big break in television came in 1996, when he was asked to create a weekly segment for Comedy Central’s “The Daily Show.” It was just three minutes of what irritated him most at the moment and the audience howled everytime. This stint evolved into “Back in Black” which became one of the most popular segments of the show during the Jon Stewart era and presently on “The Daily Show With Trevor Noah.”

Black notably voiced the character “Anger” in the Oscar-winning Pixar film “Inside Out” from 2015.

The Lancaster Performing Arts Center is located at 750 W. Lancaster Blvd. Tickets are available online at www.lpac.org, at the box office open noon to 6 p.m. Monday through Friday, and noon to 4 p.m. Saturday, or by phone at (661) 723-5950.