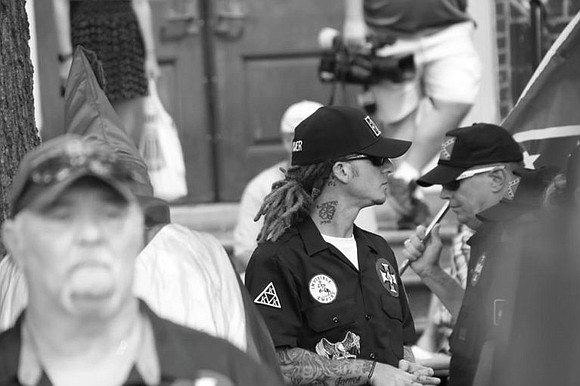 Tear gas had to be deployed in Charlottesville, Virginia Saturday as members of the Ku Klux Klan protesting the planned removal of a Robert E. Lee statue were vastly outnumbered by hundreds of predominantly black counter-protestors.

But that wasn’t even the biggest story from event. Among the 50 or so KKK members who were outnumbered was a Klansman sporting dreadlocks, a style rooted in the culture he supposedly hates.

A photo of the man, taken by photographer and University of Virginia graduate DeVanté Cunningham, quickly went viral. Speaking to the BBC on Monday, Cunningham said that seeing the man (who refused to engage with him) was surreal.

“Me and my friend were in total disbelief,” Cunningham explained.

“We really couldn’t believe we had just seen a Klansman with dreads. We’re looking at the KKK here, and dreadlocks are basically a symbol of African culture,” he said. “It was really weird to see.”

Below, more details about the rally and its tear gas conclusion via CNN:

Police escorted the Klansmen through the shouting crowds to reach their designated spot for a demonstration: Justice Park, which until recently had been named after Confederate hero Gen. Stonewall Jackson.

About 1,000 counterprotesters were there, said city spokeswoman Miriam Dickler.

Shouting “racists go home,” the crowd drowned out the Klansmen’s chants of “white power.” Despite police lines, a few brief scuffles broke out. Counterprotesters tried to stop the Klansmen from entering and leaving the park, video showed.

After about 40 minutes, police helped the KKK members push through the crowd to reach their vehicles, Dickler said. Some protesters tried to block the Klan vehicles and police then declared the gathering an unlawful assembly, Dickler said.

As police began to move back toward Justice Park, a large crowd followed, Dickler said. There were a number of incidents, including the use of pepper spray by the crowd, Dickler said. When the crowd didn’t follow orders to disperse, state police released three canisters of tear gas and the crowd left, Dickler said.