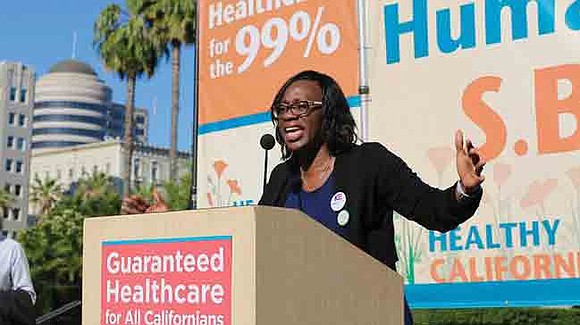 California has long been a national leader in healthcare innovation, and if Senate Bill 562 (which seeks to establish a Medicare-for-all system) passes, the state could change the direction of health care in the nation.

SB 562 is sponsored by the California Nurses Association (CNA.) According to a CNA press release, the primary goal of the new single-payer system is to save money and provide more efficient health care.

According to a study by University of Massachusetts Amherst researchers, a single-payer system could reduce California’s health care spending by 18 percent.

The University of Massachusetts Amherst study also projects that a single-payer system would cost the state more than $330 billion. (However, a legislative analysis puts the figure at $400 billion.) This would be funded by two 2.3 percent taxes on gross receipts and sales.

SB 562, introduced by State Sens. Ricardo Lara (D-Bell Gardens) and Toni G. Atkins (D-San Diego,) passed the Senate and is now with the Assembly. Lara also extolled the money that could be saved by implementing a single-payer health care system, which would also cover undocumented immigrants.

“More Californians receive their health insurance through public programs like Medicare and Medi-Cal than from any insurance company. These programs have low administrative costs and have high patient satisfaction. We have shown that California can do this,” said Lara. However, there are still several concerns and questions that have not been answered. For example, what happens to the private health care industry?

Deborah Burger, president of the CNA, said a single-payer system would effectively kill the private insurance industry. Burger said nurses, who are on the front lines of health care, see the effects of the private health care system every day. Patients have their care rationed and can’t afford premiums or medications, she said.

“CMA has a policy supporting a single payer system provided it meets certain benchmarks—the most important of which is demonstrating that the legislation would make appropriate investments in health care infrastructure, including providers for California’s patients,” said Joanne Adams, associate director of communications at the CMA. “Given what we’ve seen with the proposed raiding of tobacco tax funds, we’re not confident that the state is currently prepared to commit sufficient investments towards meaningful access to care.”

Senate Republicans are also skeptical of the bill. State Sen. Janet Nguyen (R-Garden Grove) was concerned about the cost and how it would be funded. “SB 562 would cost California taxpayers $400 billion, more than twice the size of the entire state budget. It makes sweeping promises to provide health care for every Californian but has no funding plan to pay for it and no guarantees of greater access for consumers. It is a false promise to Californians,” said Nguyen.

Sen. Tom Berryhill, (R-Twain Harte,) was also extremely critical of SB 562. He gave a lengthy speech in the Senate outlining his problems with the bill. According to Berryhill, the Democrats have not offered a clear plan for funding their single-payer health care system.

“If we cut every single program and expense from the state budget and redirected that money to this bill, SB-562, we wouldn’t even cover half of the estimated $400 billion price tag,” said Berryhill.

“Obviously, the state would have to generate a lot of new revenue from somewhere, but the bill has not identified any concrete sources of revenue.” Berryhill also cited the VA, the UC system and the high-speed rail project as other examples of poorly financed and run government programs. “I’m just worried that single-payer would suffer the same fate as these other projects,” said Berryhill. Nguyen said the GOP favors improving healthcare by fixing Medi-Cal and also improving access to clinics that serve rural and low-income areas. “We should begin by working to improve access for the 14 million people on Medi-Cal, which is the state’s current government-run program.

SB 562 is being reviewed by the State Assembly. If they don’t add any amendments, it goes back to the Senate and onto Gov. Jerry Brown’s office. Brown has publicly expressed skepticism about the bill, especially about how to pay for it.