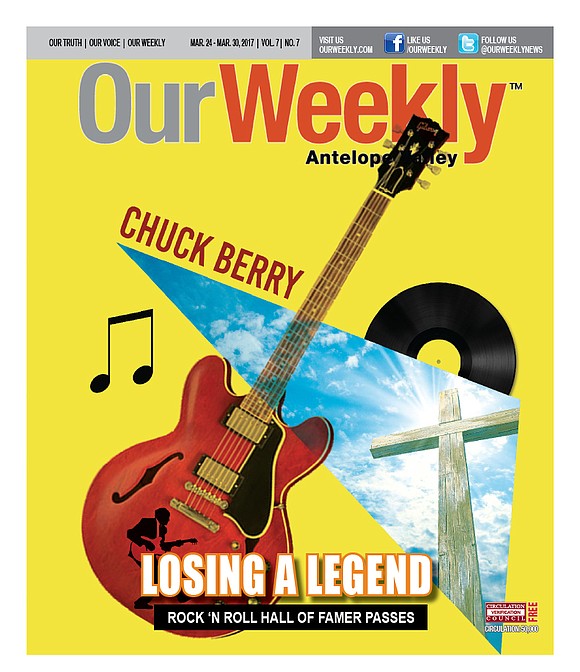 By now, all of the accolades and applause have been afforded to the late Chuck Berry. The man who more than any other musician put a stamp on rock ‘n roll music died last weekend at his Wentzville, Mo. home at age 90.

Known for the classic hits “Maybellene, “Johnny B. Goode,” “Roll Over Beethoven,” “School Days” and “Sweet Little Sixteen,” Berry was America’s most influential rock ‘n roll singer/songwriter and left a legacy of musical influence that will likely never be repeated. On these and dozens more seminal recordings, Berry played clarion guitar riffs and a relentlessly rhythmic blend of blues and country music to define the rock ‘n roll sound while celebrating teenage life and loves of 1950s and ‘60s America.

At a time when rock ‘n roll lyrics were secondary to the sound of the records, Berry’s sophisticated depictions of adolescence (e.g. schools, cars, dating, growing up) demonstrated for the first time that the music could mirror and articulate the experience of a generation. He was widely hailed as rock ‘n roll’s first guitar hero for his sexuality and flamboyant style of performance that helped to push the instrument into the forefront of the new musical genre. He was also equally lauded for his lyrical genius at a time when most other artists relied on outside writers to pen their songs, most notably the songwriting team of Jerry Lieber and Mile Stoller.

Berry’s musical reach extended far beyond the 1950s. Prior to taking America by storm, groups like the Beatles and Rolling Stones drew heavily on Berry’s hit records and frequently included these in their early stage shows. On Saturday, Mick Jagger of the Rolling Stones said Berry influenced his decision to become a musician: “He lit up our teenage years and blew life into our dreams of being musicians and performers. His lyrics shone above others and threw a strange light on the American dream.” While Jagger’s bandmate, Keith Richards, once said that he lifted all of Berry’s [guitar] licks during his youth, John Lennon remarked in the early 1970s that “if you tried to give rock ‘n roll another name, you might call it ‘Chuck Berry.’”

Scores of musicians took to social media to comment Berry’s musical legacy. Lenny Kravitz acknowledged Berry as the figure who made rock ‘n roll possible: “None of us would be here without you.” Rod Stewart: “It started with Chuck Berry. He inspired us all.” Bruce Springsteen: “Chuck Berry was rock’s greatest practitioner, guitarist and the greatest pure rock ‘n roll writer who ever lived.” Brian Wilson: “A big inspiration. He will be missed by everyone who loves rock ‘n roll.” Joe Walsh: “Thanks for showing us how to do it. We’ll never forget you.” Former presidents chimed in as well with Bill Clinton commenting: “He made our feet move and our hearts more joyful. And along the way changed our country and the history of popular music.” Barack Obama said this: “Chuck Berry rolled over everyone who came before him, and turned up everyone who came after.”

Berry was notoriously private off stage and controlling on stage. He never allowed his immense fame, however, to eclipse the real meaning of his presence in the music industry which was to bring decades of joy to three generations of rock ‘n roll fans. He was arguably the first African American crossover artist as millions of White teenagers around the world flocked to the record stores and to his live performances to revel in his sound. Later, artists such as James Brown, Michael Jackson and Prince would draw the crossover audience, but it was Berry who may have sparked more musical input to the Civil Rights Movement and racial integration than anyone else. In a rare interview from 2002, Berry spoke candidly with the Los Angeles Times and explained what motivated him year after year to perform without getting caught up in the hype of celebrity.

“One of my realizations is that if you revel over joy, you’re going to ache over pain and get killed over hurt,” he said. “Your span of feelings are going to go just as far one way as the other. So when something real good comes to you, take it and chew on it. Then when something bitter gets in there, you won’t feel so bad chewing it and smiling, because the other one wasn’t that good, so this won’t be that bad.”

Berry was the first person inducted into the Rock ‘N Roll Hall of Fame when it opened in 1986. It was quite a class including Elvis Presley, Buddy Holly, James Brown, Jerry Lee Lewis, Ray Charles, Little Richard, Fats Domino, Sam Cooke and the Everly Brothers. Of all of these performers, Berry remained among the most indefatigable and acclaimed, performing around the world well into his 80s. At the time he said he was wary of accepting a crown as the so-called “king” of rock ‘n roll. “It’s not me to toot my horn,” he told the Washington Post. “The minute you toot your horn, it seems like society will try and disconnect your battery. And the minute you do not toot your horn, they’ll try their darndest to give you a horn to toot, or say that you should have a horn. It’s them that creates the demand, so let them toot the horn.” He further shared his thoughts on celebrity in 1987’s “Chuck Berry --The Autobiography”: “My view remains that I do not deserve all the reward directed on my account for the accomplishments credited to the rock ‘n roll bank of music.”

Berry was credited with penning more than 100 songs, the best known of which used carefully crafted rhymes and tightly written vignettes about American life such as “Back In The U.S.A.” (“New York, Los Angeles, oh how I yearned for you. Detroit, Chicago, Chattanooga, Baton Rouge. Let alone just be at my home back in old St. Lou”), “Brown Eyed Handsome Man” (Two, three the count with nobody on, he hit a high fly into the stand. Rounding third he was headed for home it was a brown eyed handsome man”), “Run Rudolph Run” (“Run run Rudolph, Santa’s got to make it to town. Can’t you make him hurry, tell him he can take the freeway down”) or “Nadine” (“As I got on the city bus and found a vacant seat, I thought I saw my future bride strolling up the street. I shouted to the driver ‘hey conductor you must...slow down I think I see a thief, let me off the bus’”). As a lyricist, Berry was among the finest in American pop music always able to coin a phrase about day-to-day life and match that with scintillating guitar licks.

Chuck Berry so embodied the American rock tradition that his recording of “Johnny B. Goode” was included on a disc launched into space on the Voyager 1 spacecraft in 1977. Early on, he personified the dangerous appeal of rock ‘n roll. With his lithe, athletic body and perfectly pomaded hair, he was a dynamic stage presence and would grin salaciously and telegraph lyrics with a wide-eyed, almost childlike exuberance and shoot across the stage unleashing a staccato burst of bright, blaring guitar notes brought on by bending two strings at once for a more powerful sound from his Gibson hollow body electric guitar. That’s when he would go into his signature “duck walk” with his legs bent and seemingly made of rubber, and his body moving with clocklike precision. He said he initiated the “duck walk” at the Brooklyn Paramount theater in 1956. “I had nothing else to do during the instrumental part of the song,” he remembered, “so I did it and here comes the applause. Well, I knew to coin anything that was entertaining, so I kept it up.”

While his music thrilled audiences for six decades, some of the listeners took it upon themselves to profit off his genius. The Beach Boys were sued in 1963 after their hit “Surfin’ U.S.A.” bore an uncanny resemblance to Berry’s “Sweet Little Sixteen” (1958). He won the judgment and since then all references to “Surfin’ U.S.A. includes Berry as a co-writer with Brian Wilson. “Come Together” by the Beatles (1969) begins with the line “Here come old flat top, he come groovin’ up slowly” which, it turned out, was lifted from Berry’s “You Can’t Catch Me” from 1956 (“Here come a flat top, he was moving up with me”). Berry won that lawsuit as well and while “Come Together” remains credited to Lennon and Paul McCartney, Lennon was required to record three of Berry’s songs, thereby generating royalty fees to the original publisher of “You Can’t Catch Me.” Bob Dylan has always acknowledged that the dizzying flurry of rhymes and images he spun out in “Subterranean Homesick Blues” (“Johnny’s in the basement, mixing up the medicine, I’m on the pavement thinking ‘bout the government...”) owed much to Berry’s 1956 song “Too Much Monkey Business” (“Blonde haired, good looks tryin’ to get me hooked. Want me to marry, buy a home, settle down, write a book!”).

The highs and the lows

For all of his stage magic, Berry had several dark periods. In his late teens he served three years in a reformatory for a robbery charge, and after becoming famous did jail time on a charge of transporting an underage girl across state lines. Years later he was convicted of tax evasion (Berry insisted on making concert promoters pay him in full—in cash—prior to each show), and after the police found 62 grams of marijuana in his home in 1990, they confiscated videotapes from a camera placed in the women’s restroom at his restaurant.

Charles Edward Anderson Berry was born on Oct. 18, 1926 in St. Louis, one of six children. His mother, Martha, was a teacher and his father, Henry, was a carpenter whose enthusiasm for poetry and other literature made a deep impression on his children. Berry began his musical journey while singing in a church choir and in the high school glee club. After receiving cheers for a high school performance of “Confessin’ the Blues,” he began playing guitar and performed with a number of bands in the St. Louis area. During this time he worked at an auto plant and was a hairdresser. Berry and Themetta “Toddy” Suggs were married in 1948 and had four children.

Berry had always admired the traditional pop standards and singers like Frank Sinatra and Nat King Cole, and he particularly loved big-band music and the jump blues sound of Louis Jordan. In 1952 he joined the Sir John Trio, teaming for the first time with pianist Johnnie Johnson, who would become an indispensable sideman on Berry’s records. They performed blues and ballads, and also adapted country music tunes into a “Black hillbilly” sound that became popular. After drawing big crowds at the Cosmopolitan Club in East St. Louis, Ill, they changed the name of the band to the Chuck Berry Trio.

Berry went to Chicago in 1955 to meet his hero, Muddy Waters, and after a show Berry received Waters’ autograph and asked for advice about making a record. Waters reportedly told Berry to contact Leonard Chess, the head of the famous blues label Chess Records. Later he brought Chess a demo tape of the song “Ida Mae” which he had retitled “Ida Red.” Chess thought it had potential, but he wasn’t sold on the title. Legend has it that Chess saw a box of mascara on a table and suggested Berry rename the song “Maybellene.”

After that day, American music would never be the same.