Who's responsible for fixing the problem? 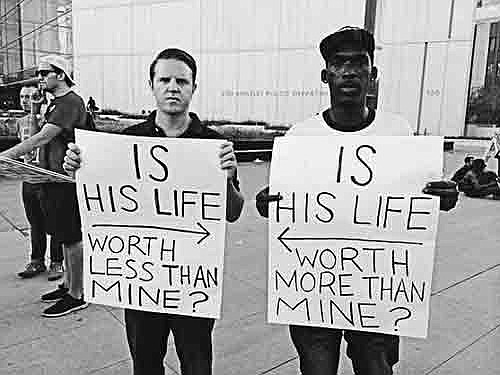 Racism remains a prevalent problem in the United States. But many Americans do not think the responsibility to end racism is exclusive to one race. Rather, the responsibility belongs to both Black and White people, according to this exclusive Third Rail with OZY-Marist Poll, commissioned by WGBH Boston and OZY Media for the new PBS prime-time, cross-platform debate program Third Rail with OZY.

Americans perceive the solution to lie in the hands of everyone, and do not believe Black people need to work harder than others to end racism.

The disparity in the perception of societal advancement between Blacks and Whites has not improved. Although half of Americans assert that both Black and White people have an equal chance of getting ahead today in society, by more than 10-to-one Americans say White people have a better chance than Black people of doing so. And, this disparity has changed little over the past 20 years.

The national survey was conducted by The Marist Poll in advance of the Sept. 15 Third Rail with OZY debate, which asked: “Is America becoming more, or less, racist”? Third Rail with OZY, hosted by Emmy Award-winning journalist Carlos Watson, is a seven-part cross-platform series. Each week, expert and celebrity guests engage with Watson to debate a timely, provocative topic, incorporating audience and social media input and exclusive national polls.

The Marist Poll found that the onus to improve race relations is on everyone, according to 60 percent of Americans. However, 22 percent of residents believe the responsibility belongs to White people, and 7 percent say Black people need to work on correcting the problem.

The survey called to mind the reflections of Martin Luther King Jr. “The arc of the moral universe is long, but it bends toward justice,” said Dr. Lee M. Miringoff, director of the Marist College Institute for Public Opinion, quoting the late civil rights leader. “But, in its totality, the results demonstrate the arc is bending very slowly, at best.”

Half of Americans (50 percent) think White and Black people have an equal chance of getting ahead in today's society. This is little changed from 46 percent of U.S. residents who expressed this view in a 1997 CBS News/New York Times survey. Forty-one percent compared to 43 percent two decades ago say White people have a better chance at advancing. Only 4 percent think Black people have the edge in getting ahead, similar to 5 percent in the 1997 survey.

Again, opinions differed by race. While a majority of White Americans (54 percent) say both Black and White residents have an equal chance of advancing, nearly two-thirds of African Americans (65 percent) and half of Latinos (50 percent) report White people have the advantage to move ahead in today's society.