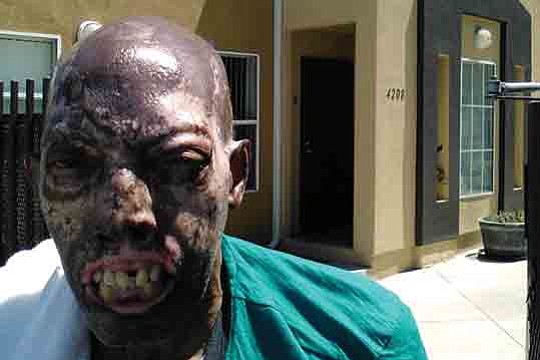 A Los Angeles man who suffered extensive burns in a crash told KTLA on Friday (June 8) that he was trying to raise funds to pay for a medical procedure that would make him the first African American to receive a facial transplant. According to the GoFundMe page for Robert Chelsea, he was driving home from church in 2013 when his car overheated and forced him to pull over to the side of the freeway. While he was waiting for roadside assistance, a drunk driver crashed into his car and it exploded on impact. As a result, Chelsea suffered third-degree burns on more than 50 percent of his body. The GoFundMe page did not name the driver; however, that person had three prior DUI convictions. Chelsea, 67, spent a year and a half in the hospital, and actually spent the first six months in a coma. “While the burns covered much of my body, it was my face that suffered the worst visible damage,” he said. After three years of tests and evaluations, he qualified as a candidate for facial reconstruction. “There is a relatively new medical procedure called ‘Facial Transplantation’ that can make my face whole again,” he wrote on the GoFundMe page. “Since 2005, only 41 people in the world have undergone this procedure. And with your help, I will become first African American in the country to receive this breakthrough surgery.” Chelsea said the money raised on the GoFundMe page would pay for what his insurance would not cover, in addition to travel expenses to Boston, where he would have the surgery and receive follow-up treatments. He added that as of May, he’s been first on a donor list to receive the procedure. Without enough funds, however, he said he would lose the opportunity. As of today (June 12), the GoFundMe page has raised $43,251 out of a goal of $65,000. “One thing I want to do most of all, is kiss my daughter’s cheek,” Chelsea told KTLA. “That I have not been able to do.” Find his page here.