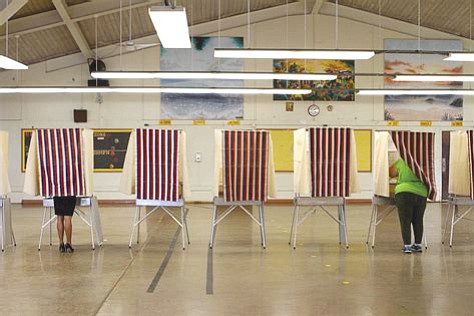 “Use it or lose it” is an age-old expression normally aimed at couch potatoes who allow their bodies to wither under the tyranny of father time.

The idea is that if an individual fails to exercise on a regular basis it could lead to the deterioration of his physical faculties and overall health.

Such thinking rarely travels outside the fitness industry. However, in what many critics believe is another ploy to suppress the minority vote, Ohio has mandated that residents who go more than four years without voting will be removed from the state’s registration rolls. In other words, they can either use their right to vote, or risk losing it.

Apparently, even constitutional rights have an expiration date in today’s nebulous political climate.

This directive received the United States Supreme Court stamp of approval in a 5-4 decision recently, reports show. The law allows the state to strike voters from the registration rolls if they fail to return a mailed address confirmation form, and don't vote for another four years, or two federal election cycles.

According to NPR, the challenge to Ohio's law was brought by a software engineer named Larry Harmon, who usually votes only in presidential elections. In 2012, Harmon reportedly didn't like the Obama-Romney choice, and so he stayed home. And when he went to vote a couple of years later, against a ballot initiative about marijuana legalization, he found he was no longer registered. He had been purged from the rolls, because he hadn't voted in two consecutive elections, nor had he sent back a postcard the state sent out to confirm that his address had not changed.

Ohio is among a handful of states where voters can be kicked off voter registration rolls after not voting in three federal elections.

Once a registered voter skips voting for two years, that person is mailed a confirmation notice and then purges voters who don’t respond and don’t vote for another four years. In 2015 and 2016, Ohio purged 426,781 voters this way.

Ohio Attorney General Mike DeWine, who is running for governor this year, argues that the state’s voter removal policy isn’t based on a history of not voting -- it’s based on whether people respond to the mail confirmation request. However, critics point out that the mail request only occurs because the state first seeks out inactive voters.

This is a common theme to the various efforts to reform voting laws around the country over the last decade or so. Proponents, mostly Republicans, offer commonsense justifications for the rules--like avoiding fraud--but it can be difficult to find any evidence of widespread (or even narrow) fraud, while the new laws (commonly requiring photo ID to vote or eliminating early voting) disproportionately affect the minority populations that vote heavily Democratic.

Ohio is of particular interest nationally because it is one of the larger electoral swing states with the potential to determine the outcome of presidential elections. But partisan fights over ballot access are playing out across the country. Democrats have accused Republicans of trying to suppress votes from minorities and poorer people who tend to vote for Democrats. Republicans have argued that they are trying to promote ballot integrity and prevent voter fraud.

Civil rights groups said the court should be focused on making it easier for people to vote, not allowing states to put up roadblocks to casting ballots.

"With the midterm election season now underway, the court's ruling demands heightened levels of vigilance as we anticipate that officials will read this ruling as a green light for loosely purging the registration rolls in their community," said Kristen Clarke, president and executive director of the Lawyers' Committee for Civil Rights Under Law.

The notion of stripping citizens of their right to vote hasn’t entered the consciousness of California officials, but a Compton journalist said purging voter rolls would make it easier to recall Compton’s defiant elected officials.

“In Compton, there are some 45,000 voters on the registration rolls,” explains Cynthia Macon. “With half the population of Compton being children under the age of 18 ineligible to vote, this means nearly every single adult in Compton, in theory, is registered to vote and carried on the rolls."

Macon explained that, in stark contrast, the largest turnout for any recent election was approximately 15,000 for Measure P and 2008, 2012, and 2016 presidential elections, but the normal city turnout is only about 5,000-6,000 in any given election. That begs the question — why carry so many names in excess?

One answer falls to the calculation, she said, f the number of needed signatures for a recall. If 20 percent is required of the names carried on the entire roll for a citywide recall of a mayor, for instance, then the calculation would be 45,000 x 20 percent which equals 9,000 votes to mount a recall.

"But if the rolls were purged to the active voting public, then the calculation could read, for instance, 15,000 x 20 percent, which would equal only 3,000 signatures — 9,000 versus 3,000 makes a big difference in the ability of citizens to place fear in elected officials who ignore their wishes, Macon said.

"This fact alone makes a sizeable difference in the ability of voters to recall and remove incompetent or egregious politicians. In fact, some Compton election observers complain the voter rolls are deliberately inflated and kept artificially high to insulate and make it almost impossible or difficult to recall any Compton elected official.”

A Reuters study in 2016 found that at least 144,000 people were removed from the voting rolls in recent years in Ohio’s three largest counties, which are home to Cleveland, Cincinnati and Columbus.