An informative and encouraging book 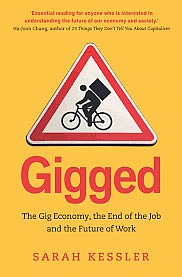 Your allowance was never enough, as a kid.

Oh, sure, it bought you what you needed but what you wanted, well, you had to figure that out yourself. A dime here, a dollar there, little chores-for-pay, tasks for Grandma and you made it work. And as you’ll see in the new book, “Gigged” by Sarah Kessler (2018, St. Martin’s Press), some things never change.

Back in 2011, when she was a reporter for a tech blog, Sarah Kessler became aware of a new start-up that utilized non-traditional workers in non-traditional ways. It was called Uber, and its business concept seemed unusual; having grown up in rural Wisconsin, Kessler had no frame of reference, and she paid it little heed.

Eventually, though, she began to see that the model Uber was using – modified in so many ways – was being used for a lot of start-ups and could, potentially, benefit a lot of people. Was this gig economy really the way of the future?

It had been around awhile: in the early 1970s, Kelly Girls were available for temp work; becoming a Kelly Girl was advertised as a way to pay for life’s extras. But, no surprise, research showed then – as it does now – that temp working and gig economy jobs are taken more as a way to make ends meet.

Intrigued, Kessler began following a few people who paid the bills with a string of non-traditional jobs they took for a variety of reasons. She followed an African American man who tried to bring the gig economy to his impoverished and not-so-mobile town. Other profiles were of the young and tech-savvy (or learning). Their backgrounds varied, as did their races; in other words, they fit in with the average gig worker, the numbers of which “grew 47-fold between 2012 and 2015.”

While gig-working did, indeed, pay the bills for Kessler’s subjects, she also learned that it was not all good. Yes, there was “independence, flexibility, and freedom” but at what price? For workers, it offered often-low pay, few-to-no benefits, and no safety net. For employers, it saved money, but the hassles were daunting and “churn” could churn one’s stomach...

So is this “what the future might look like,” as author Sarah Kessler says? In “Gigged,” she offers some tantalizing clues and more than one caveat.

For anyone who’s stuffed envelopes for pennies, or wondered if there’s real cash to be made gigging, this book sets it straight: Kessler’s subjects made money but it was hard, hard work and none of them are still gig-economy workers. Recommendations are sparse. That says a lot.

For business owners, it’s more complicated: temp workers and small tasks seem to go hand-in-hand, but Kessler outlines many laws and rules that might make your head rotate like a spin mop. And, as it appears, further legislation is coming…

Readers would be correct in assuming that we haven’t heard the final word on this subject. Change occurs frequently. In the meantime, “Gigged” is interesting, informative, and timely - and until the dust has settled, that’ll have to be enough.