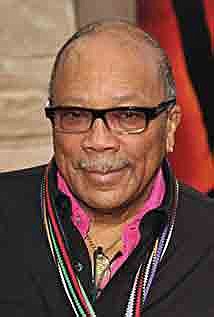 Composer and film/music producer Quincy Jones this week sank his hands and feet into cement in the forecourt of the TCL Chinese Theatre, honoring a career that has earned him Emmy, Grammy and Tony Awards and paired him with some of the biggest names in entertainment.

The 85-year-old Jones said he was overwhelmed at the honor, reflecting back on his teen years in Seattle when he would watch movies in awe.

“I was so addicted at 15 years old, I can't tell you,'' Jones said. “... I used to sit in the theater and think about composing music for these films. And I was absolutely addicted. I could never have imagined that those dreams would lead me to here, to this moment, and to be honest, it is a little bit overwhelming.''

After rising to fame as a bandleader, Jones got his break in the film industry when Sidney Lumet hired him to compose the score for the 1964 film “The Pawnbroker.'' He went on to work on scores and original songs for more than three dozen films, earning Oscar nominations for his work on “The Wiz,'' “Banning'' and “In Cold Blood.'' He was also nominated along with Steven Spielberg as a producer of “The Color Purple.''

He received the Academy of Motion Picture Arts and Sciences' Jean Hersholt Humanitarian Award in 1995, becoming the first Black recipient of the honor.

Jones also won a Tony Award for the musical revival of “The Color Purple,'' and won an Emmy for his composing work on the television miniseries “Roots.''

Jones was also a close collaborator with Michael Jackson, producing the pop legend's albums “Off the Wall,'' “Thriller'' and “Bad.'' He also produced Jackson and Lionel Richie's charity hit “We Are the World,'' which was written to raise funds for famine relief in Africa.

Jones is the first film composer to be honored in the famed Chinese Theatre forecourt. The honor came on the heels of the Netflix documentary about his life, “Quincy,'' which was released in September.