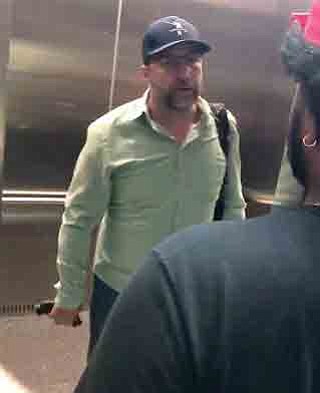 NBC News and other media sources are reporting that a white man pulled a gun on four Black Florida A&M students to keep them from entering an apartment complex in Tallahassee. The weekend altercation, which was captured in a social media video, shows a man in a baseball cap denying the students entry to the building and elevator in the Stadium Centre residence before pulling out a gun. According to the police report, the incident occurred at 12:30 a.m. Saturday and is being investigated as an aggravated assault with a deadly weapon, without intent to kill. Isaiah Butterfield, a junior at Florida A&M who filmed the incident, told NBC News that he and his friends were waiting to be let into the building by another friend, a resident of the complex, when the man approached them. “He walked past us and opened the door and he told us we weren’t getting into the building unless we had a key,” Butterfield said. “We were thinking, 'Why would he even say anything to us?' We were confused.” After the man approached the students a second time, Butterfield decided to start recording. “In Tallahassee, there’s a lot of people with their own racial opinions,” Butterfield said. “It doesn’t sound like a place where people of color are invited or welcomed.” The video posted on Butterfield's Twitter account begins with a shirtless white man, who Butterfield and his friends identified as “Chad,” confronting the man on behalf of the students. The two have an altercation, with Chad asking the man: “What’s your problem? You’re not just man enough to go about your day?” Butterfield said, “We literally met Chad that night. We didn’t really know Chad like that. He was there and heard what was going on, and he stepped up. I commend him for that.” Inside the building, the man tells the students to find another elevator, declaring to them, “this is my elevator.” As the altercation escalates, the man pulls out his gun and keeps it by his side. “He made sure that we saw the gun,” Butterfield said. “He was holding his arm in a way to emphasize it.” One of the students, Fitzroy Rhoden, is heard in the video asking the man: “Sir, you bring out your gun. What’s your purpose for that?” The man then apologizes and puts the gun in his back pocket. Despite the weapon being out, Butterfield wasn’t concerned that the man would shoot at them, saying he thought it was more of a “if you make me use it, I’m going to use it” kind of threat. The students began to ask the older man if he is a resident of the building, considering the apartments were predominately rented by college students. “My friend asked him, ‘Do you even live here, where’s your key?’” Butterfield said. The video then shows the man respond, pulling out keys and a gun. In an email shared by Butterfield, Stadium Centre management addressed the situation, stating: "We are cooperating with the police during their investigation and it has been determined that the person in the elevator is not a resident. Firearms are prohibited on our property and we take this matter very seriously." Tallahassee police spokesman, Damon Miller Jr., told NBC News the department is still conducting interviews as part of the investigation. Many on social media are identifying the man in the video as the general manager of Baymont Inn & Suites Tallahassee Central. On Tuesday, Baymont Tallahassee released a statement on their Instagram account confirming they were aware of the situation and that the general manager has since been fired. Watch the video of the incident here: https://twitter.com/twitter/statuses/1038447860054990848