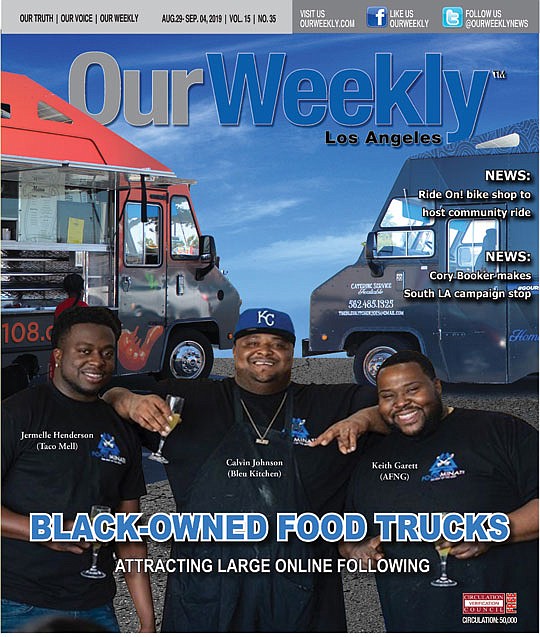 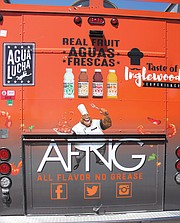 The food truck industry is a niche market capitalized by Greeks and Hispanics, as the first gourmet taco truck was founded in 1974 by Raul Martínez, Sr. in East Los Angeles. He operated a mobile lunch wagon out of a converted ice cream truck. Author Gustavo Arellano has credited Martinez as the inventor of the modern taco truck.

According to the Los Angeles Department of Public Health (DPH), the first large assemblage of Black food trucks took place at the Olympic Village in Exposition Park in 1984. There were 11 registered for permits with the DPH. Beverly Morris, a retired restaurant inspector, believes that was the first time she saw that many Black food trucks. The hottest thing on wheels this summer are mobile meals operated by African-American entrepreneurs.

Today, Black millennials and social media have facilitated the resurgence of the summer of 1984 with the Black food truck. The majority of them offer a culinary experience with cuisine our elders may have enjoyed, but now with a new-age twist.

Trap Kitchen food trucks (Los Angeles and Portland Ore.) have gained national and international attention for their remarkable story and Instagram celebrity chef status. The business was founded by two former rival gang members (Crips and Blood), Roberto Arturo Smith and Malachi “Spankihanas” Jenkins. According to Jenkins, his interest in food started when he got hired as a personal chef for local pimps while living in Las Vegas.

“I started cooking for them after I dropped out of Le Cordon Bleu College of Culinary Arts,” Jenkins said. “The pimps loved rich pasta dishes like shrimp and Chicken Alfredo.” Prior to having a food truck, Smith and Jenkins had an underground restaurant where food was prepared in Smith’s apartment located just south of Downtown Los Angeles, and local workers.

While both Jenkins and Smith were serving their downtown clients, another member of the Trap Kitchen team, Armani Fjaje, was busy catering celebrity events and serving her famous seafood tacos to nail salons and beauty shops prior to becoming a business partner. Fjaje, as well, is a former Blood active in empowering at-risk Black females involved in gangs.

Trap Kitchen has used its platform to speak to youth at juvenile detention centers, encouraging the youth to leave the gang life behind and start their own businesses. Trap Kitchen’s fried rice and seafood tacos have gained Instagram celebrity chef status with tens of thousands of followers and attracted a celebrity clientele.

Now summer staples like the ice cream truck have competition in the form of a shaved-ice dessert truck called Happy Ice. Customers attest that @happyice is the best social media handle to remedy hot summer weather and is slated to add a Hollywood storefront location to their distribution this month.

Happy Ice manager, Jajuan Johnson, has been an employee at the shaved ice shop for two years. He said his favorite part of working on a food truck is that “you get to cater to different types of people and events.”