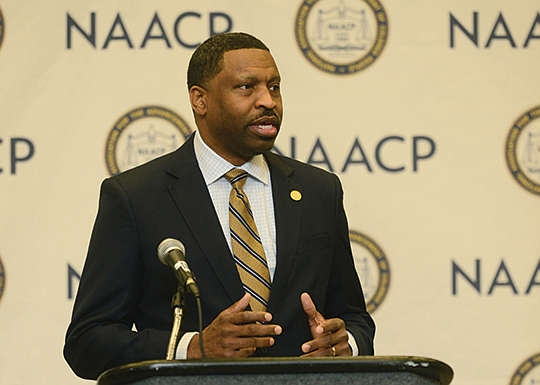 “The NAACP appreciates the courage and dedication of the U.S. House of Representatives in voting to impeach President Donald Trump on two articles: abuse of power and obstruction of Congress. We recognize that this vote was cast after extensive investigation and reflection. We thank the members who showed the courage of their convictions to stand up for the Constitution and place our rule of law above the interests and actions of a single individual. No one, not even the president, is above the law.

The evidence shows that President Trump abused the powers of the presidency by sacrificing our security and other vital national interests for his own personal and political benefit. He has betrayed the nation by abusing his office and attempting to enlist a foreign power in corrupting our democratic elections. That he actively sought foreign interference in our elections is an insult to every American who has struggled for the right to cast a free and unfettered vote and to have that vote counted equally.

The evidence shows that President Trump obstructed the investigation by Congress into his activities by showing ‘unprecedented, categorical and discriminate defiance’ of its oversight role required by the Constitution.

The Senate must now discharge its Constitutional obligations to conduct a fair and impartial trial and treat this national crisis with the solemnity and gravity it deserves. The president must be held accountable for his actions.

Today’s vote and the Senate trial will directly affect the integrity and security of the 2020 election. Foreign intervention in the 2016 election – for the benefit of Donald Trump – is a proven fact. The evidence unequivocally shows that President Trump personally demanded foreign interference in our 2020 election, again to his own benefit. He will remain a threat to our national security, to our way of life, and to the Constitution if allowed to remain in office.

At this critical juncture, we call for a complete halt to the nomination and confirmation of lifetime judicial appointments to the federal bench. A corrupt president who has shown contempt and disdain for the Constitution should not make irrevocable appointments to the federal judiciary at the same time that his own fitness to serve is being determined by the United States Senate.

The Membership and our Board of Directors are fully committed to the principle that no man is above the law, we are a representative democracy, not a monarchy.”