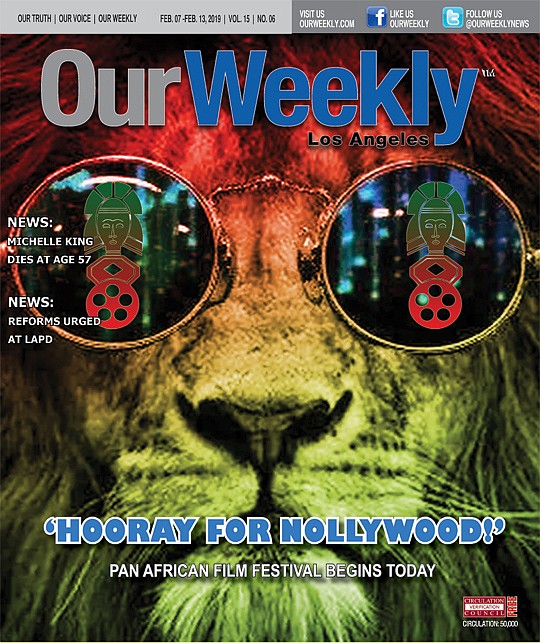 February is here, and once again Black History Month emerges in our collective conscientiousness. For those of the Diaspora here locally, it is the 27th iteration of the Pan African Film Festival (PAFF). This year, the venerated Executive Director Ayuko Babu is joined by his fellow co-founder and this year’s host, activist, actor and humanitarian Danny Glover. Acknowledging the importance of entertainment in this, the epicenter of show business, Babu reiterates his desire to infuse uplifting content into the psyche of incoming theater goers. The content of the festival aims to get audiences to stop and think while enjoying the selections that make up the 193 offerings this year. All screenings will take place at the Rave Cinemas Baldwin Hills Crenshaw Plaza 15 unless otherwise specified.

Thursday, Feb. 7 not only opens the festival, but also marks a historical milestone. In 1972, after years of commercial and critical success in the secular music world, “The Queen of Soul,” Aretha Franklin returned to her roots. Before a packed audience in Los Angeles’ New Temple Missionary Baptist, she recorded a live performance that became the double-platinum “Amazing Grace” that eventually sold more than two million copies. Alas, the visual record of this event directed by Sidney Pollack has been lost for decades due to technical difficulties and contractual issues.

Recently these problems were resolved, and the documentary “Amazing Grace” will make its premiere at 6 p.m. at the Directors Guild at 7920 Sunset Blvd., on the Sunset Strip. At $100 a ticket, movie-goers will glimpse the diva in all her glory, supported by the mentors that nurtured her genius, including her father the Rev. C.L. Franklin, gospel icon Clara Ward, and Rev. James Cleveland and his stellar choir. (rock aficionados can glimpse The Rolling Stones’ Mick Jagger and Charlie Watts among the attendees). Backing them is a crackerjack band comprised of Cornell Dupree (guitar), Bernard “Pretty” Purdie (drums), and Chuck Rainey (bass). As a bonus, attendees will rub elbows with such luminaries as Bobby Brown, Loretta Devine, Laurence Fishburne, Danny Glover, Ledisi, Nate Parker, LA Reid, Victoria Rowell, Tyrese, and LA County Supervisor Mark Ridley Thomas. The Center Piece of this extravaganza is a contemporary western for the millennium entitled “Little Woods,” screening on Wednesday, Feb. 13 at 6:45 PM. Tessa Thompson and Lily James portray two sisters scrounging for survival in the North Dakota oil fields. Economic circumstances force them to resort to illicit activities in order to maintain their homestead in this directorial debut by Nia DaCosta. Ticket prices are $45, which includes a reception after the screening. Saturday, February 17 marks the festival finale with the Closing Night screening. The Red Carpet starts at 6 PM, for the yet to be announced film.

PAFF prides itself on presenting films from every corner of the African Diaspora, so that all of its descendants, in Babu’s words, can “…better understand our lives.” This year is no exception, with some ten films from South Africa alone. Among these selections are “Sew the Winter to My Skin,” directed by Jahmil X.T. Qubeka. Set in that country’s apartheid era of he 1950s, it has the distinction of being a nominee for this year’s Academy Award for Best Foreign Language Film. Heavily influenced by the Western tradition of America, it chronicles the exploits of a Robin Hood like figure as he rebels against the racist power structure of the times. Other offerings from South Africa include “The Last Victims,” “Tomato Soup,” “Rafiki,” and “Oliver Tambo: Have You Heard from Johannesburg?” the little known story of the statesman who engineered the release of incarcerated anti-apartheid leader Nelson Mandela. Moving north to the United Kingdom comes a World War II drama, “When Hands Touch,” starting rising starlet Amandla Stenberg. Abbie Cornish co-stars in this romance between a mixed race girl and a member of theHitler Youth in Nazi Germany. Across the Atlantic and closer to home, the South American republic of Brazil submits a martial arts thriller based on the exploits of real life historical figure Manoel Henrique Pereira. Growing up on the early 20th century, he became so proficient at the then outlawed art of Capoeira that he was given the nickname “Besouro” or beetle inPortuguese (also the eponymous title of this motion picture). Like a beetle he could always escape from dangerous situations. His fighting skills and mastery of the African mystical traditions elevated him to mythical status, giving birth to the rumor that he could literally fly and was impenetrable to bullets. In any event he remains a hero in the fight against racial injustice (fun fact: on 26 November 2014, Capoeira was granted a special protected status as “intangible cultural heritage” by the United Nations Educational, Scientific and Cultural Organization (0UNESCO).

A world of cinematic excellence

Continuing north to the United States, we come to “Ali’s Comeback: The untold Story,” a documentary which examines the maneuvering of Black and White attorneys, businessmen, and politicians to allow deposed Heavyweight Champion Muhammad Ali to return to prize fighting and regaining the title wrongfully taken from him. “Armed” stars Mario Van Peebles as an ex-U.S. Marshall suffering from the after effects of a case gone wrong. The reappearance of a fellow lawman exacerbates this hallucinogenic mix of conspiracy, gunplay, PTSD and the rise of reactionary politics. This thriller includes Rocsi Diaz, Columbus Short, and Dionne Warwick, and political commentators Van Jones and Roland Martin. American contributions to the festival include ““Paul Laurence Dunbar: Beyond the Mask,” a documentary on the noted author, playwright, and poet whose career straddled the 19th and 20th centuries. Made over the course of eight years, it is a labor of love in conjunction with PBS, the National Endowment for the Humanities, and the Ohio Humanities Council in Dunbar’s native state. The festival would not be complete without a nod to America’s only original art form (with apologies to hip-hop/rap aficionados). “Blue Note Records: Beyond the Notes” traces the history of the label, started in 1939 by two German-Jewish jazz enthusiasts, that promoted some of the greatest practitioners of the idiom. The musiciansprofiled include John Coltrane, Miles Davis, Lou Donaldson, Herbie Hancock, Nora Jones, Thelonious Monk, Wayne Shorter, and Rudy Van Gelder. Further west from the country/continent of Australia comes the intriguing documentary “Whale Like Me,” which examines the complex relationship between man and the largest mammals on earth. Writing and directed by conservationist Malcolm Wright (incidentally the grandson of esteemed Novelist Richard Wright), the film grew out of the younger Wright’s vocation as a visual effects technician (“I, Robot,” “The Hunger Games,” “King Kong”). Eight years in the making, it follows him on a quest across 12 countries in a transformative experience, shedding light on the mutual evolution of both species.

Beyond the moving image

PAFF continues its pursuit of culture outside the realm of the moving image. Spilling out from the Rave Cinemas and into the mall, a variety of activities are available for festival goers. A potpourri of ethnic artifacts, crafts, jewelry, and items of interest are available for perusal throughout the shopping center. Spoken word, an oral tradition dating back to its origins in the Motherland, will again be presented on Saturday, Feb. 19 on the second level “Bridge” from 7 to 10PM. Admission is $15 in advance and $20 at the door. Of special interest is the PAFF Institute, comprising a series of discussions, lectures, and screenings on career advancement, entertainment and filmmaking, digital technology, financial literacy, home ownership, and other subjects. This year’s the Pan African Film Festival runs from Thursday, Feb. 7 through Monday, Feb. 18. For more information on these and other selections from PAFF, go to http://www.paff.org/.