Blackface: The sad return of a bygone social construct 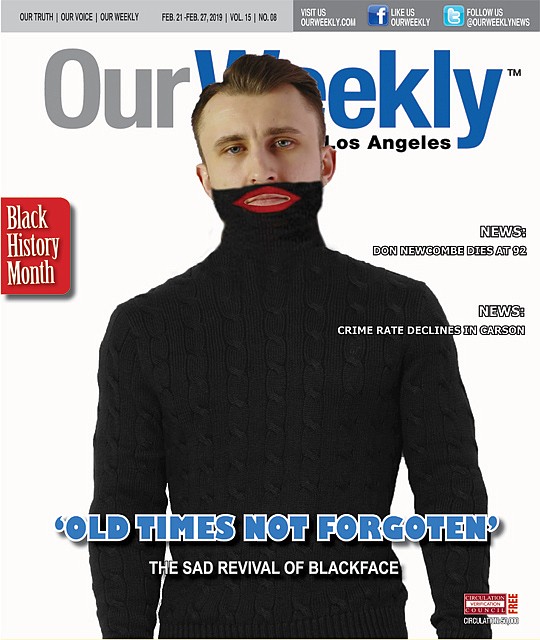 During my service as a probation officer, I was often told by Hispanic and White teens serving time in Orange County Juvenile Hall that I resembled Ben Davis. These wards of the Probation Department would jokingly remind me in the morning during roll call.

Ben Davis is a smiling gorilla, the logo for a line of clothing that was manufactured for construction workers. When I first saw the image, I thought of blackface minstrels and exaggerated Black figures that appeared on advertising tins, cookie jars, and wind-up toys that once were very common in America at the turn of the century.

This February during Black History Month, I am reminded that blackface is resilient and may never go away. African Americans have witnessed two public officials in blackface and the fashion industry marketing blackface sweaters and shoes that appear reminiscent of minstrelsy, as well as high-end handbag accessories that can best be described as a blackface doll.

The history of blackface is very painful according to Dr. Dwandalyn Reece, curator of Music and Performing Arts at the Smithsonian Institution’s National Museum of African American History and Culture. During an interview, Dr. Reece stated:

“The history of minstrelsy is a performance tradition that was started around the mid-1800. It consisted of Whites dressing up and caricaturing African Americans, mimicking their dance, language and music for the purposes of entertaining their audience.

“Minstrelsy operates in two ways: It separates Whiteness as something very distinct from Blackness and frames Blackness as something of the ‘other’ and lesser than White cultural habits. It represents ways of speech, songs and dance lesser than White cultural habits. It objectifies African Americans in distancing them from humanity. It made them seem foolish, simple minded, unintelligent and cheap.”

“Minstrelsy created an image and a stereotype that people use as a lens to judge African Americans then and now. It transitioned to Vaudeville with performers such as Thomas “Daddy” Rice and minstrelsy was considered musical comedy across theater, television, radio and film. “

Dr. Reece believes that if there were more African are Americans employed as consultants or if older politicians today had interacted with individuals outside their race then recent incidents involving blackface fashion and photos of politicians in blackface would not exist.

Tieria Coleman, a media executive, believes politicians such as embattled Virginia Gov. Ralph Northam may be fearful of being forced out of office for taking a photo in blackface. However, during the time of Northham’s yearbook photo it did not appear to be dangerous.

Coleman says “unlike politicians, the fashion industry does not care.” Coleman believes blackface fashion may have been forecast as the next frontier by a ‘creative director,’ and it may have been discussed at the last annual fashion awards, during one of its after parties.”

The Fashion Awards took place in November 2018 and, according to several industry magazines, Miuccia Prada earned the Outstanding Achievement Award. But it was Gucci, whose phenomenal popularity managed to snag what could be considered the most exciting title of the evening: Brand of the Year.

In the fashion world, according to Coleman, it currently is a $2.4-trillion-dollar industry with the individual creative director widely regarded as a guide a team of employees with skills related to design, fine arts, motion graphics, and other creative industry skills. From the standpoint of a fashion creative director, examples of this are seen in visual layout, brainstorming, and influence from different cultures. To assume the role of a creative director, Coleman explained, a person must possess a specific skill-set and have expertise in many areas of the fashion industry. Coleman suggested that individuals such as Alessandro Michele of Gucci, Miuccia Prada of Prada Fashion Company, and Katy Perry of Katy Perry Shoes may be lacking the “skill of judgment” in their design choices.

‘Lack of judgment’ among designers

Gucci CEO Marco Bizzarri reportedly hired creative director Alessandro Michele a few years ago. Michele has been described in fashion as a “cultural magpie” or, an artist who derives not only inspiration but also specific materials from previously existing works of art when designing fashion. Michele has since apologized for the blackface sweater.

African American fashion designer Francis Wagner believes Michele’s influence has given Gucci a more whimsical and inclusive approach to design. He stated that Gucci had experienced a lull in its products prior to Michele’s guidance. However, Michele, who has been described as reconnecting Gucci to its historical roots in street culture, has reportedly created tremendous gains in popularity and profits. According to Wagner, the street culture consists of Black talent such as athletes and musical artists who have come to embrace the brand.

Coleman believes Miuccia Prada, an Italian billionaire fashion designer and businesswoman, is directly responsible for approving the blackface doll. According to Coleman, Prada currently serves as the co-chief executive officer and lead creative director of the Italian handbag and fashion label Prada.

“I buck so hard sometimes [on design]. People will bring something to me and say, ‘This is such a great basic style.’ I’m not a basic; I’m not here for the basic. That’s a waste of my time. I’m here to disrupt this sleepyville.”--Katy Perry

According to Coleman, the above quote was from a interview Katy Perry did when she launched her fashion line in Spring 2017. Coleman states on her website that: “The Katy Perry Footwear Collection features shoes with a distinct personality. Shoes that turn heads, stop traffic, and start conversations. Designed 100 percent by Katy Perry, the collection is inspired by her travels, passions, and friends.”

In preparing this article and reminiscing about my so-called resemblance to a gorilla, it reaffirms my belief that Jim Crow and all of the insults associated with that term have awakened from a state of dormancy and is alive and well within American society.