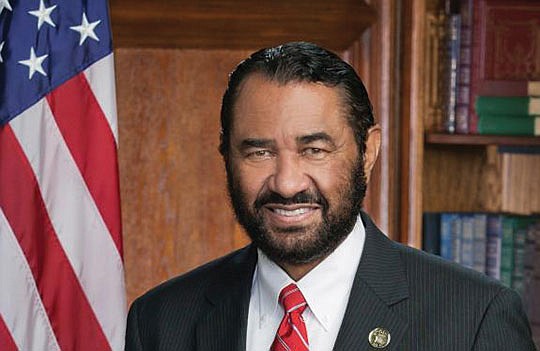 Rep. All Green (Democrat – Texas) introduced articles of impeachment against President Donald Trump over his racist tirade against four progressive congresswomen of color, setting up a potential showdown in the Democratic-controlled House. The Texas lawmaker read the articles aloud on the House floor Tuesday night, citing the president’s “go back” to other countries rant against the freshman lawmakers known as “the Squad” as one reason to move forward. ″Donald John Trump by causing such harm to the society of the United States is unfit to be president and warrants impeachment, trial and removal from office,” Green said on the House floor. He accused the president of bringing “contempt, ridicule, disgrace and disrepute” to the office. Under House rules, Green can force the chamber to act on his resolution within two legislative days. He has called for an up-or-down vote. House leadership could vote to table it or refer it to the Judiciary Committee. Green’s resolution came hours after the House voted to condemn as racist Trump’s attacks on the four freshman lawmakers ― Reps. Alexandria Ocasio-Cortez (N.Y.), Ayanna Pressley (Mass.), Rashida Tlaib (Mich.) and Ilhan Omar (Minn.). In a flurry of tweets Sunday, Trump called on the congresswomen, who have been outspoken in criticizing him, to “go back” to other countries. All four are Americans. Omar immigrated to the U.S. from Somalia in 1995. The other three were born in the U.S. The president continued his attacks in the following days, tweeting Tuesday that they should “leave” if they don’t like the U.S. and falsely accusing them of being “pro-terrorist.” Just four Republicans joined Democrats in voting to condemn Trump’s “go back” comments as racist. Many congressional Republicans have remained silent or defended the president over his hateful rhetoric, save a few exceptions, including Sen. Joni Ernst (R-Iowa). “To condemn a racist President is not enough, we must impeach him,” Green said in a statement Tuesday about his decision to introduce articles of impeachment against Trump. “This will be a defining vote. The world is watching, and history will judge us all.” Green has forced the House to vote on impeachment articles twice before ― in 2017 and 2018 ― when Republicans controlled the chamber. The resolutions were ultimately tabled with roughly 60 of his Democratic colleagues voting to debate them each time. Democrats remain divided on whether to move forward with impeachment. House Speaker Nancy Pelosi (D-Calif.) has pushed back against doing so, warning that it could only cause further division among Americans and benefit Trump’s reelection. Other Democrats, including “the Squad” and fellow progressive members, have forcefully called on the House to move forward with impeachment. Green’s resolution could cause Democrats who have been hesitant to embrace or dismiss impeachment to go on the record with their positions. Some congressional Democrats worry Green’s resolution comes at an ill-advised time as the House prepares to hear testimony from former special counsel Robert Mueller on July 24 about his investigation into Russian interference in the 2016 election and whether Trump obstructed justice. Several Democrats, as well as Rep. Justin Amash (I-Mich.), called for Congress to impeach Trump in the wake of the Mueller report, which outlined instances of potential obstruction of justice committed by the president. “I cannot control what another member does,” Rep. Cheri Bustos (D-Ill.) told CNN of Green filing articles of impeachment. “It looks like that’s going to happen. We will just have to deal with that.”