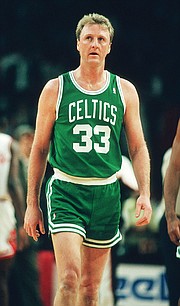 Magic Johnson and Larry Bird—whose storied rivalry began in the 1979 NCAA basketball tournament final and continued through their years as pros—will be jointly presented with the Lifetime Achievement Award at the 2019 NBA Awards.

The pair will be honored during a ceremony set for June 24 at the Barker Hangar in Santa Monica.

“With their epic rivalry, individual brilliance and team success, Johnson and Bird helped define the modern NBA and elevate the league in the 1980s,” according to a statement from Turner Sports and the NBA, which present the honors.

“The rivals turned friends both earned three NBA Most Valuable Player Awards, nine All-NBA First Team selections and 12 NBA All-Star nods, along with being inducted into the Naismith Memorial Basketball Hall of Fame and security spots among the NBA’s 50 Greatest Players.”

Bird and Johnson played together on the gold-medal-winning Dream Team at the 1992 Olympics, a team that was also inducted into the Basketball Hall of Fame.

The basketball legends burst into the national spotlight in 1979, when Johnson led Michigan State to victory over Bird’s Indiana State squad to claim the national championship title. The game still holds the record for the highest TV ratings for a college basketball telecast.

Both players earned immediate success as professionals the following year, with Johnson leading the Lakers to an NBA title and Bird being named NBA Rookie of the Year with the Boston Celtics.

Johnson recently resigned as the Lakers president of basketball operations. Bird held the same position with the Indiana Pacers, and still serves with the team as a special adviser.