Discharged at Skid Row: Where to go from here? 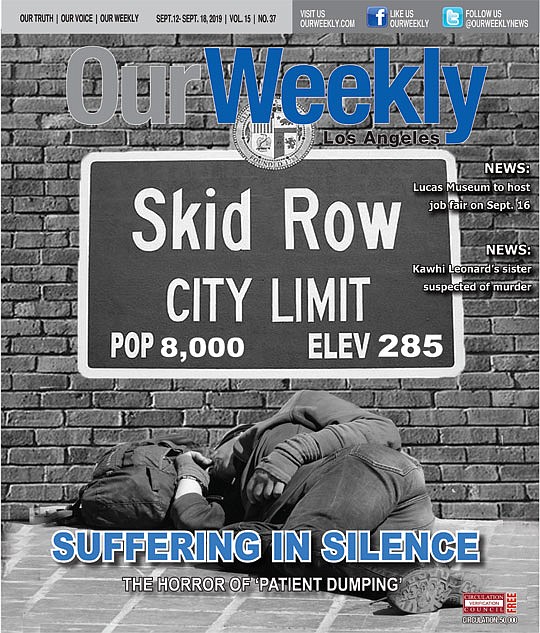 The pungent smell of urine and marinated trash lingers in the air of the infamous downtown neighborhood; Skid Row. It’s where the city’s indigent and outcasts get “dumped” like trash on pick up day. Over 50 city blocks, dozens of tents are lined up, inch by inch, next to waste covered sidewalks, human excrement and used needles. It stretches from 3rd Street on the north, 7th Street on the south, Main Street on the west, and Alameda Street on the east.

Skid Row has always been known for housing the unfortunate of society, ex cons, the chronically homeless, mentally ill, and drug addicts found the holy ground to build their own community in Skid Row. It’s estimated that Skid Row’s population lies between 5,000 to 8,000 people.

But how did they all get there?

The area of Skid Row is said to be approximately 62 percent Black. It was once predominantly White, and dates back to 1870. When the railroads were built on the margin of an unfolding downtown—as we know it today—the area was for industrial use and therefore attracted mostly men for temporary work by the railroads and similar businesses around the area.

Eventually, small hotels and transitional living spaces arose, which became the single-occupancy residential hotels of today, attracting a service community to cater to the needs of the workers, and opportunity seekers. But during the Great Depression, these hotels and services also drew in a high population of pariahs, many who were waging battles against substance abuse. In the 1940s, LA became a hub for war jobs and soldiers to be shipped off. Because the demand to entertain a new population was high, various bars, and adult shops, as well as small theaters opened.

Between 1950 and 1960, the City of LA decided the hotels in the area weren’t safe and needed to be repaired or demolished. Landlords would eventually demolish these structures (because of low rent receipts) and because of an elderly population that lived on a fixed income. This would leave many persons displaced, especially after the housing stock dropped from approximately 15,000 units to about 7,500 units. From the ‘60s to the‘70s, Skid Row saw an increase in young African-Americans from the Vietnam war who were experiencing trauma, unemployment, and drug addiction. These events set the battlegrounds for Skid Row.

These days, Skid Row is also the deposit hub for former inmates released from prison with $200 or less in their pockets, and no place to go, as well as discharged patients, and the mentally ill. Often, hospital case workers from nearby County-USC and White Memorial hospitals will come to Skid Row to check on individuals requiring medication and other out-patient services, but many times these indigent persons have been dropped off still in their hospital gowns and slippers. Hospitals like Kaiser Permanente and Hollywood Presbyterian Medical Center have received backlash in the past for this practice. Lawsuits have been brought forth and subsequently settled with the city of Los Angeles.