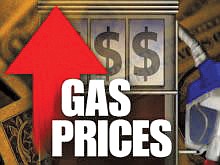 The average price of a gallon of self-serve regular gasoline in Los Angeles County rose 2.1 cents this week to $3.693 after being unchanged over the previous three days.

The average price is 1.6 cents more than one week ago, 9.7 cents higher than one month ago and 2.5 cents greater than one year ago, according to figures from the AAA and Oil Price Information Service. It has risen 30.2 cents since the start of the year.

The Orange County average price rose 1.6 cents to $3.652 after increasing one-tenth of a cent each of the previous two days. It is eight-tenths of a cent more than one week ago, 7.9 cents higher than one month ago, and 4 cents greater than one year ago. It has risen 30.3 cents since the start of the year.

The weekend drone attacks on two major oil facilities in Saudi Arabia, including the world’s largest, Abqaiq, is expected to bring some volatility at the pump in the coming days and weeks, according to Jeanette Casselano, the AAA’s director of public relations.

“Americans can expect local pump prices to start to increase this week,’’ Casselano said. “The jump could end up being as much as a quarter per gallon throughout this month. Whether this is a short- or long-term trend will be determined by the price of crude oil prices and how quickly the facilities in Saudi Arabia can recover and get back online.’’

Damage to the facilities is still being accessed. To ease concerns, President Donald Trump said he has authorized the release of crude from the Strategic Petroleum Reserve.

The U.S. depends less on crude imports from Saudi Arabia than in the past. The latest Energy Information Administration report showed that the U.S. imported the least amount of crude oil from Saudi Arabia this decade. In the first half of this year, on average the U.S. imported about 18,000 barrels compared to 35,600 barrels in the first half of 2017.