A stroke can happen instantly, but precautions can be taken

Stress can lead to compromised health 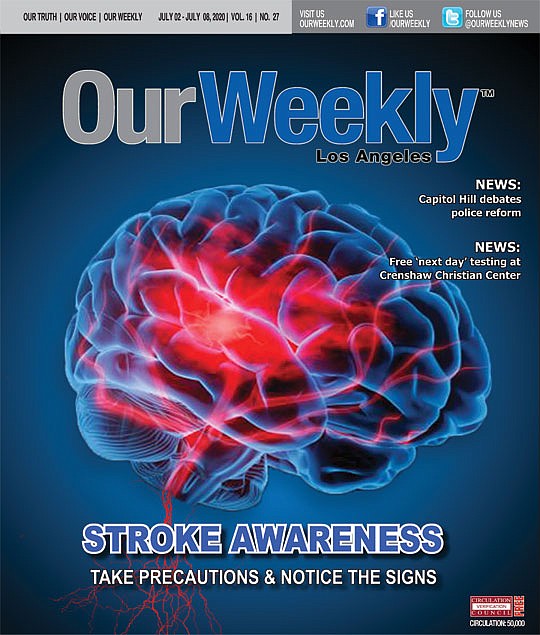 Race no indicator of stroke

Race is no indicator of stroke victims. However, some persons may be more susceptible than others. The American Heart Association (AHA) convenes a stroke statistics subcommittee which produces estimates and facts about stroke and other cardiovascular diseases in the United States. Their findings revealed that African-Americans represent 3.2 percent of stroke victims yearly. Each year, a reported 700,000 people suffer a stroke, according to data from the ASA. Further, 500,000 of those medical emergencies represent a person’s first brain attack. The remaining 200,000 are identified as repeat strokes.

African-Americans are also disproportionately affected by obesity. The Centers for Disease Control and Prevention (CDC) says that, among non-Hispanic Blacks 20 years and older, 63 percent of men and 77 percent of women are overweight or obese. Since obesity is often related to hypertension (resulting from an historically salty, fatty diet), being overweight can increase the risk of stroke.

Diabetes can contribute to stroke

Diabetes is a disease that African-Americans are reportedly more likely to have than non-Hispanic Whites. Medical experts have found that persistently elevated blood glucose levels contribute to the buildup of plaque (a pasty substance composed of cholesterol, calcium cellular waste and protein) that sticks to the walls of blood vessels and interferes with flood flow. This increases the chance of a blood clot and, potentially, can lead to a stroke.

There are several forms of a stroke, all of which fall under the risk factors of high blood pressure, diabetes and smoking. The ASA reports that ischemic stroke accounts for about 87 percent of all strokes; the remaining 13 percent are hemorrhagic strokes. But there are other types. Men, for instance, are reportedly 61.5 percent more likely to suffer what is called a thrombotic stroke (a interruption of blood flow to a part of the brain due to slow formation of a blood clot), and are 23.5 percent more likely to suffer an embolic stroke (occurring when a blood clot or mass of cholesterol plaque wanders into the brain and becomes trapped inside an artery). The ASA says that thrombotic stroke accounts for roughly 59 percent of brain accidents in women, while cerebral embolus accounts for some 26.2 percent.

Most young people generally believe that strokes only happen to elderly people. That’s a dangerous myth. In 2016, the CDC reported that while it is true that as people age, the risk for stroke may increase. New research has indicated that there is an increasing number of stroke victims between the ages of 18 and 65 years, indicating that strokes are not rare within that age gap.

The CDC has revealed that more than 6 million Americans have had a stroke, making it the fourth leading cause of death in the United States. But strokes are preventable. The Cushing Neuroscience Institute in Manhasset, NY cited an International Stroke study from 2014 that revealed that 90 percent of strokes can be tied to vascular risk factors like high blood pressure, diabetes and obesity.

Experts contend that if you’re not able to contact medical personnel immediately after stroke symptoms appear, keep trying. Specifically, if it is a TIA stroke-and the symptoms last just a few minutes-heeding them early and getting treatment can save brain function and your life.