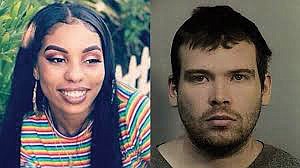 The verdict is in after very brief deliberations in the Nia Wilson murder trial, and it's guilty on all counts for 29-year-old John Lee Cowell. As KRON 4 reports, the Alameda County (California) jury found Cowell guilty of first-degree murder, and a second “sanity phase” of the trial will begin Wednesday, which will guide his sentencing. He was also found guilty of attempted murder in the stabbing of Wilson’s sister. The verdict came in after just a few hours of deliberations, following closing arguments Monday and this morning. Surveillance video of the brutal July 22, 2018 stabbing was played for jurors multiple times, and prosecutor Butch Ford insisted to them Monday that they “believe [their] eyes” and convict Cowell. Cowell’s court-appointed defense attorney, Christina Moore, tried to appeal to the jury Monday, as the San Francisco Chronicle reports, writing, “The case is, and always has been, about what was in John Cowell’s mind, not whether the act occurred." Moore argued that Cowell was deeply delusional and listening to voices in his head at the time that he killed Wilson and tried to kill her sister. She repeatedly tried to keep the case from going to trial based on Cowell’s mental incompetence. Moore reportedly lashed out at a spectator in the gallery, possibly a member of Wilson’s family, on Monday, after they responded during her closing argument question to the jury about whether she and Cowell seemed like co-conspirators following a script. As the Chronicle recounted, a member of Wilson’s family replied “Yes,” and Moore snapped back, “This isn't about you.” Later, Moore reportedly tearfully plead with the jurors not to hold her outburst against her. But, it seems that jurors were more convinced that Cowell was in control of his actions that July day at MacArthur BART station, and that he deserves to be found guilty regardless of his mental state. Jurors also saw footage of Cowell escaping the crime scene, pointing officers away from himself, and changing clothes before exiting the station. The brutal murder made national headlines, particularly after there were early suggestions from investigators that it may have been racially motivated. In testimony that may have been thrown out due to his ejection from the courtroom and refusal to return, Cowell testified in the trial to hearing voices of aliens that told him that the Wilson sisters were aliens who had kidnapped his grandmother. The trial was repeatedly delayed because of Cowell’s lack of mental fitness to stand trial; however, two psychiatric experts ultimately agreed he was mentally fit, and a judge in December accused Cowell of “malingering” to avoid trial.