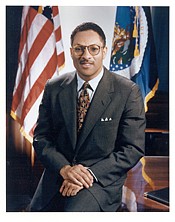 Former U.S. Agriculture Secretary Mike Espy has won the Democratic nomination for a U.S. Senate seat in Mississippi on Tuesday, setting up a rematch with Republican Sen. Cindy Hyde-Smith, an outspoken ally of President Donald Trump, reports the Associated Press. Republicans hold most major offices in Mississippi, which hasn’t had a Democrat in the U.S. Senate since 1989.

Hyde-Smith was unopposed for the Republican nomination this year. She is the first woman to represent Mississippi in either chamber of Congress. She was appointed to serve temporarily in the Senate when Republican Thad Cochran retired amid health concerns in early 2018. She and Espy were the final two candidates in a hard-fought special election later that year to occupy Cochran’s seat for the remaining two years of the six-year term.

Hyde-Smith defeated Espy in a November 2018 runoff. Espy told reporters Tuesday night that he is better prepared for this election. “We’re going to build the greatest coalition of voters — White and Black; rural and urban; male, female — that Mississippi’s ever seen,” Espy said. Hyde-Smith said Tuesday on Twitter, “We can let the Liberal Democrats with their socialist agenda know … it may be alive and well in the heart of Nancy Pelosi, BUT IT IS DEAD IN MISSISSIPPI!”

Espy defeated two candidates in Tuesday’s Democratic primary. Libertarian candidate Jimmy Edwards will also be on the ballot for Senate in November. In the final days leading to the 2018 runoff with Espy, a video showed Hyde-Smith praising a supporter at a campaign appearance by saying she would attend a “public hanging” if the man invited her.

That prompted widespread criticism that Hyde-Smith was being insensitive in a state with a history of lynchings of African Americans. Hyde-Smith said it was “an exaggerated expression of regard” for the supporter.

In 1986, Espy became Mississippi’s first African American congressman since Reconstruction. In 1993, President Bill Clinton named him agriculture secretary. Tuesday in the northern Mississippi town of Walls, Brandone Abrams said he voted for Espy because he respects his long political career. Abrams said Hyde-Smith’s 2018 comment about the public hanging bothered him.

“You have an obligation as a leader to say the right things, and some things offend people,” Abrams said. “When you make certain comments, it shows your character.”