GirlTrek on a mission to inspire Black women to walk 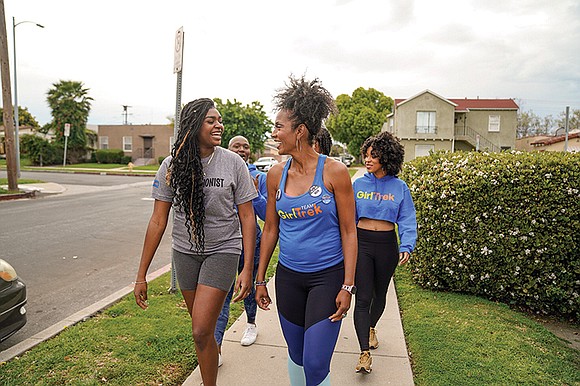 With 920,000 members and counting, GirlTrek is the largest health movement and nonprofit for Black women and girls in the country. The organization encourages Black women to use radical self-care and walking as the first practical step to leading healthier, more fulfilled lives.

“We’ve built a revolution of Black women who know their worth and put themselves first and now we only need 80,000 more to join us so we can show the world what 1 million Black women look like when we come together in our power,” said Jaida Vaught, GirlTrek chief of marketing and strategic partnerships.

There are 20 million Black women in this country and 82 percent are overweight -- that’s 16 million Black women who are at greater risk for heart disease, stroke, diabetes and other chronic health conditions. Black women die earlier than any other group of women. With the stress of being Black in America and becoming buried under the suffocating weight of systemic oppression, Blacks often medicate with things like excessive sleep and food.

GirlTrek was cofounded by two friends, T. Morgan Dixon and Vanessa Garrison. Over the years, the organization, which originally began as an email walking challenge among friends, expanded to a nationwide movement inspiring radical healing and health transformation among Black women.

Based on membership data collection, in 2019, 26 percent of GirlTrek members reported taking less medication after committing to a daily walking practice; 61 percent of women lost weight since the previous year; 40 percent of women continued to see improvement in symptoms from a previous health condition and 98 percent of those who have been diagnosed with depression said walking has improved their symptoms.

In the middle of a global pandemic and a national reckoning on race, GirlTrek’s membership has tripled.

“GirlTrek was uniquely positioned to lead in this moment in history. To be the light and the fire Black women were looking for. For the past 10 years, we’ve been building a movement like none other, designing and implementing the most effective, on-the-ground public health solution for Black women,” said Dixon. “A solution rooted in the wisdom of our foremothers. Wisdom we’ve had to seek many times as we built this movement. And this year was no different. When the pandemic hit in March, we called on our ancestors. They reminded us that we been doing this work. That we had laid the groundwork and now was our time. Because Black women were ready. Because the world was ready.”

GirlTrek is free to join. It all starts with taking the pledge at GirlTrek.org and dedicating 30 minutes a day of self-care.

“We are in our final mile to the million,” said Jaida Vaught, GirlTrek Chief of Marketing and Strategic Partnerships. “Now here’s what we need to do: It’s time for us to go back and get a sister just like Harriet Tubman taught us. Share the GirlTrek pledge with three Black women from your sister circle – could be your daughter, your mother, or your soror from back in the day. Whoever it is, we need them with us and we need you to bring them into the GirlTrek sisterhood.”