Time’s running out: Take 10 minutes, or lose 10 years of services

Complete the quick and easy, safe and secure census form before Sept. 30 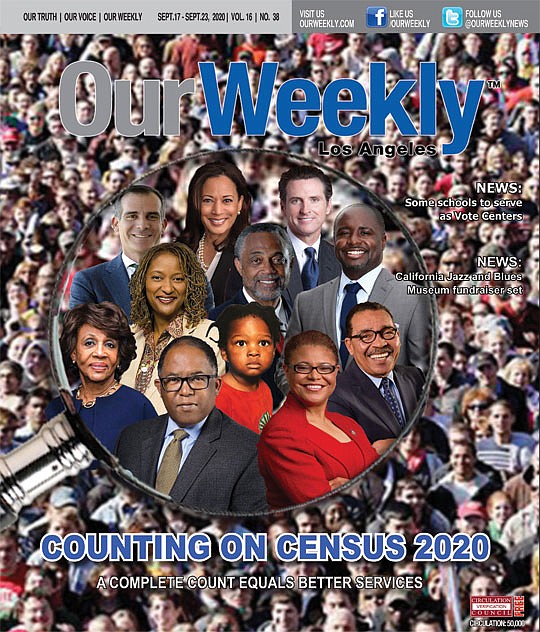 “...it is clear this administration is doing everything in its power to make sure particular communities are not counted.”

Last week, a federal court rejected President Trump’s order to exclude unauthorized immigrants from population counts that will be used to reallocate seats in the House of Representatives.

Since the first census was taken in 1790, the number of seats each state holds in the House of Representatives has been based on counts of everyone living in the country, regardless of citizenship or legal status. (Former slaves gained citizenship in 1866).

In July, the POTUS tried to change the reapportionment count process, but judges wrote that the president’s memorandum requesting a second population count to include an estimate of the number of unauthorized immigrants living in each state “violates the statute governing reapportionment because, so long as they reside in the United States, illegal aliens qualify as “persons’ in a ‘state’ as Congress used those words.”

A second legal battle is pending, though, over the administration’s command to shave four weeks off the time reserved for the population count. Back in April, as the coronavirus upended life across the globe, the Census Bureau asked congress for a delay for in-person data collection to Oct. 31. But the POTUS requested Sept. 30.

According to the New York Times (NYT) editorial board, the president’s effort to stop the census count early, in the middle of a pandemic, is in line with his campaign of exclusion.

“It’s hard to overstate the importance of the census to everyday life in the United States,” the board said. “The vast amount of demographic information it gathers determines who gets how much political power in Congress and the states; it steers more than a trillion dollars in federal funding for health care and other critical services; it guides long-term economic decisions by governments, corporations and mom-and-pop stores; it helps determine the location of highways and schools, hospitals and housing, police and fire stations.”

On Sept. 4, Lucy H. Koh of the United States District Court in Northern California temporarily blocked the administration’s early end date, writing that “an inaccurate count would not be remedied for another decade.” The block lasts until Sept. 17, when the judge expects the administration to explain why it needs to wrap the census up so quickly.

“It’s heartening that federal judges at all levels have seen through the Trump administration’s attempts to distort and hobble the census,” the NYT editorial board said.

Taking less than 10 minutes to complete, the census is safe, secure and available in multiple languages. To complete the 2020 Census online, visit www.2020 Census.gov. If interested in completing the census by phone, call (844) 330-8282.

“The theater community comes together to raise awareness for lots of issues” Actress Audra McDonald said during her recent interview on “CBS This Morning”. She has joined the Fair Count founded by activist Stacey Abrams –  “ to bring awareness to the fact that registering for the census is very important. And that Black and Brown people are undercounted usually by about 10 percent, but even more so this year because of COVID.

“And it’s about districting as well,” McDonald said. “The government allocates trillions to communities—money and resources for medical, roads and schools.”

At the end of July, Fair Count issued a statement regarding the shortened door-knocking phase of census operations, potentially leading to inaccurate counts of historically undercounted populations.

“Based on the executive memorandum issued just last week and this recent development, it is clear this administration is doing everything in its power to make sure particular communities are not counted,” said Abrams. “We know that a robust Nonresponse Followup period is key to ensuring an accurate count of communities of color. Truncating this operation in the middle of a pandemic will ensure that these communities are not fully counted, costing them their fair share of resources and political power for the next decade.”

Nationally, response rates in predominantly Black and Hispanic census tracts are already trailing behind those that are predominantly White by 14 percent and 11 percent, respectively.

“The census is not a weapon to be used for fear mongering against communities of color, nor is it a political toy to be manipulated at the whim of this administration.” Fair Count Board Chair Carolyn Hugley said. “The purpose of the census is to count all people living in the country in order to allocate political power and resources. It is utterly imperative that the census be executed fully and comprehensively. We are charged by the United States Constitution to count every person living in the United States; not the ones we think will vote for us, or the ones who look like us, but every person living in the United States.”

Los Angeles Mayor Eric Garcetti and San Jose Mayor Sam Liccardo recently joined together to urge all cities to act now to ramp up participation in the 2020 Census ahead of the Sept. 30th deadline.

“Everybody counts, and we have just weeks to complete a full and accurate tally of every person in our cities and nation,” said Garcetti. “What’s at stake is nothing less than fair representation in Washington D.C. and billions of dollars of investments in the health, welfare, and safety of our communities. We must answer the Trump Administration’s unprecedented obstacles to participation with action to finish our Census forms, increase response rates, and lay the groundwork for our long-term prosperity.”

Currently, many large cities have response rates under 60 percent — well below the 66.5 percent national response rate achieved in the 2010 Census. The United States Conference of Mayors (USCM) will work with cities to amplify the need for an accurate count.

“The U.S. Conference of Mayors is committed to making sure that there is a full, fair, and accurate count for the 2020 Census as billions in federal funds for cities are dependent on it,” said Tom Cochran, CEO and executive director of the U.S. Conference of Mayors. “Now, more than ever, as cities are shouldering the devastating impact of COVID-19 and the economic recession left in its wake, these funds will play an even greater role in helping mayors provide essential services to their communities.”

“The Census determines the just allocation of billions of dollars of federal funding for education, housing, heath, and other critical  services; there’s not a city in the nation that can afford to treat it lightly. In San Jose — and under our Constitution — everyone counts,” said Liccardo. “I proudly stand with mayors nationwide to ensure that we reach out to every family and individual in every community to press for a complete Census.”

As the country continues to confront COVID-19 and plan for a strong recovery, the Census will dictate resources received by cities to support their economic revival.

“CCNP serves the Westlake/Pico-Union area, and the demographics in this area have changed tremendously in the last 10 years,” said Alvarez Gomez. “For this reason, we know how important it is to reach those communities that have historically not answered the Census due to fear. We have engaged women leaders of the community (promotoras) to work in those areas, in order to diminish some of those fears. By doing this, we hope to reach more of those hard to count communities."

As the largest city in the hardest-to-count county in the nation, there are billions of dollars on the line with L.A.’s Census response. Yet its current response rate is 56.5 percent. For more information about the City’s census work, visit census.lacity.org.

“The 2020 Census belongs to us all,” the US Census2020 site reads. “If you know someone who has not yet responded, please encourage them to do so today online at 2020census.gov, over the phone, or by mail. We are committed to a complete and accurate 2020 Census. To date, 93 million households, nearly 63 percent of all households in the nation, have responded to the 2020 Census.”