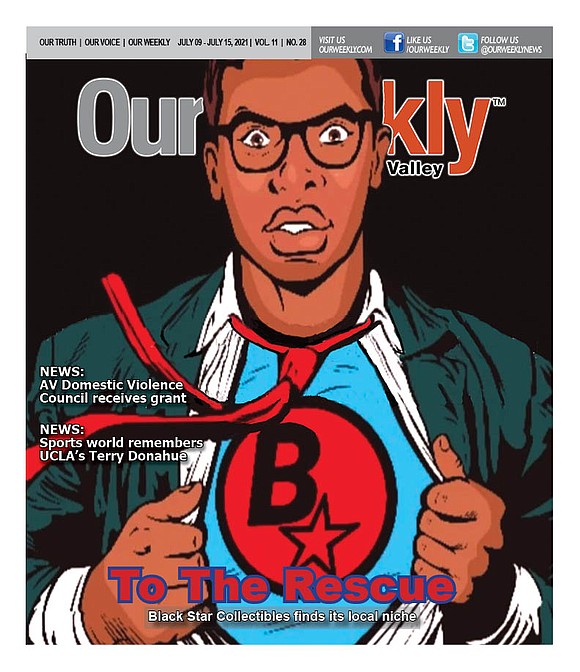 The fact that even the most jaded among us have vivid fantasies (that we may or may not admit to) doesn’t quite explain the popularity of Super Hero movies, but perhaps it gives a clue. The patronage of this genre is assuredly not limited to juvenile movie-goers, as a quick glance at box office lines will reveal patrons middle aged and above. Aside from being a harmless form of visual junk food, with little nutritional value in the form of deeper meaning or life lessons, these fanciful tales offer escapist melodrama played out by idealized beings possessing fantastical abilities that the average joe can identify with and provide a respite from everyday life.

Of course, these fictional heroes have historically happened to be largely White.

Nearly everyone is predisposed to gravitate to images that look like them, and this is not necessarily evil in and of itself. This is true of the film and marketing executives who concoct the recreational materials offered up to the teeming masses eager for new and varied content.

Kindred spirits Feon Cooper and Kareem Burton separately attended Compton High and Dominguez High School respectively, but their paths crossed while attending Chester Adult School to make up credits. During night school they developed a rapport that had nothing to do with popular culture.

Unbeknownst to each other, they also had a mutual passion for action figures, comics, toys, and related paraphernalia

“It’s already a big adjustment in high school trying to find your own identity,” Burton remembers. “…but to be labeled as something that’s not cool is like——what are you gonna do?”

“That wasn’t the most popular thing to say you liked,” he said. “If he can do it, we could do it.”

They reconnected in 1995 when Burton secured his first job during the home movie and video game craze then in vogue. Cooper soon followed him to NBA great David Greenwood's Blockbuster franchise, and through the course of work and hanging out after hours, they bonded over past childhood pastimes of He-Man action figures, ThunderCats and the whole comic book/animation strata.

Both had unrequited dreams of becoming independent shop owners, and the reality of employment at a business owned by a person of color they could relate to spawned the idea that they too, could become entrepreneurs.

Cooper’s first business venture did not materialize until 2010, when he opened his doors at Compton Boulevard and Burris Avenue. This attempt was not successful, and he shut down after a year. He cites a lack of Black heroes or protagonists as a factor behind his store’s collapse.

There was no (Black themed) content other than (Wesley Snipes’) “Blade,” he notes.

But “failure is not fatal,” as Winston Churchill once said.

The process of trying was in itself a learning experience, and four years later he started over, this time with a comic and toy store geared towards the general market in ritzy Shoreline Village, Long Beach's dining and entertainment destination on the Rainbow Marina.

This lasted two years and did much better than his initial foray, but circumstances again forced him to close, not least being the cost of the lease.

Thus fortified with additional experience, the seasoned entrepreneur shifted his strategy to downsizing, and procured a kiosk (a small cart or cubicle from which to sell his wares) at ThePikeOutlets, the open air shopping mall, again in Long Beach.

The third time was the charm, and with decent revenue rolling in, Cooper said “…my cart is still there to this day (four years later).”

Reuniting with Burton, Cooper’s resolve was restored, and the duo revisited their original concept of an Afro-themed venue as the march of time aligned, this time in their favor.

With the passage of time, the large and small screens were saturated with narrative stories featuring Black protagonists.

Over the past few years scores of Afrocentric productions have been screened or broadcast including “Black Lightning” (the CW), “Black Panther” (Marvel Studios),

“Once corporations found out they could make money off of this culture then it took away a lot of the barriers and it united people,” observes Burton.

Another positive was the proliferation of products from the Funko toy company, which manufactures licensed bobbleheads and vinyl figurines. While biding his time to open his next brick and mortar site, Cooper took advantage of the fact that unlike other segments of the company’s inventory, it’s figures based on Black characters were selling poorly. All the Black Funkos would be in the little bargain bins since they figured no one would buy them.

The mall (along with a host of other venues) shut down for an extended period. Eventually, in December of 2020 they finally opened.

“Business is solid—better then we could have expected,” Cooper said.

Contributing to their long-delayed success was exposure in the form of print and television.

“When we were featured on ABC (Channel 7) and NBC News, everything skyrocketed after that,” Cooper notes.

Presently, Black Star Collectibles boasts a staff of five, and has long-range plans for expansion.

A singular mission and

a cultural liberation of sorts

“There are Black-owned comic shops, but there's no pro-Black collector's shops where the focus is mainly on Black pop culture. That's what our store is about.”

A particular point of pride is the store’s mandate of promoting up and coming artists of color. Visitors to Black Star Collectibles are encouraged to take in the table at the center of the store, where these publishing neophytes are featured.

“We're trying to be the leading retail store for independent Black creators of books,” Cooper said.

To that end, since their December opening they have regularly held book signings for emerging artists and writers, the most recent an event promoting a children’s book entitled “Me & Mr. Jones” (no connection to the 1972 song by Billy Paul). This and other titles are produced by local publisher Thing-a-majig (see https://thingamajigstudios.org).

Burton believes that the passage of time has eased the social constraints for Black youth as well. People from all walks of life now cross the cultural boundaries to merge into what is now called “blerds” (Black nerds).

“In this (blerd) community you have so many people that look like they belong to different groups, per say, but what they have in common brings them together,” Burton said.

He also cites community support and word of mouth recommendations as a contribution to their success. Community elders who visit see the store as a bastion of cultural representation and ethnic pride.

“Our elders have been our biggest support,” Burton said. “Whether they actually purchase anything or not (in terms of merchandise), they wanna champion our cause.”

One customer who did make some purchases is Gina Bradshaw. She said entering the store was like having a time machine whisk her back to the childhoods of her son (now a middle-aged man), and her own youth, when she used a pressing iron to straighten her Barbie’s hair.

As with everything they indulge in, Black folks put their own spin on toys and collectibles.

For more liberation and representation visit Black Star Collectibles at 20700 South Avalon Blvd, Carson, CA 90746 in the SouthBay Pavilion, or go to: https://blackstarcollectibles.com/.