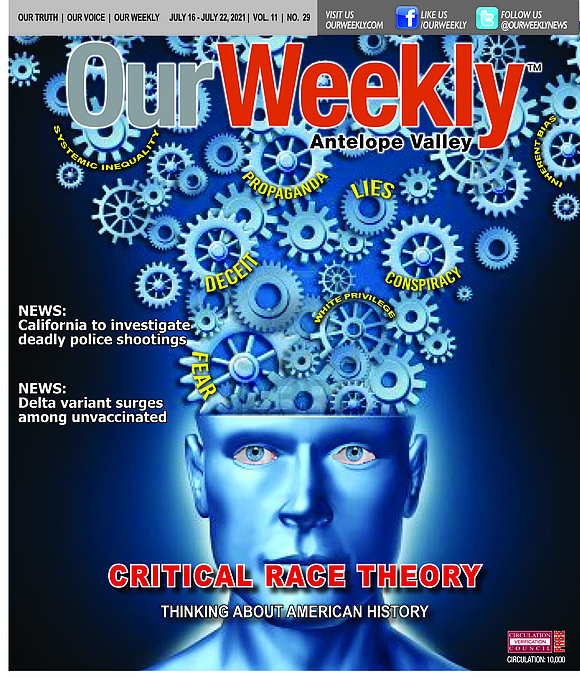 Today’s politically incendiary debate surrounding Critical Race Theory generally falls in line with the sordid yet signature history of American politicians using Black people for political gain. Both parties are guilty of this, be it for noble or nefarious reasons.

It’s as old as Aaron Burr accusing Thomas Jefferson during the 1800 presidential campaign of siring a stable of “Monticello mulattoes.” In 1860, the Republican Party made good on its vow to nominate and elect an anti-slavery president. Southern Democrats for next 100 years would blame Abraham Lincoln for the resultant bloodletting.

In modern times, you need look no further than the 2000 presidential campaign when George W. Bush was in peril heading into the South Carolina primary. With John McCain coming off an impressive victory in the New Hampshire primary, push polls and fliers began circulating in South Carolina that suggested that McCain’s adopted daughter from Bangladesh was actually “a Negro child” he had fathered out of wedlock.

Bush would see record turnout and an 11-point victory in the Palmetto State, effectively ending McCain’s chances at securing the nomination.

Twelve years earlier, Bush’s father, George H.W. Bush, faced similar chances against Democratic presidential candidate Michael Dukakis. Two months prior to the election, the Bush campaign began an attack on a Massachusetts furlough program instituted by then-Gov. Dukakis by running an ad about Willie Horton, a convicted murderer sentenced to life without parole, who raped a woman and stabbed her fiance while on weekend furlough. The ad’s racial overtones were not lost on anyone. One month later, the political winds had shifted and Bush was up by 10 points nationally and would sail easily to the White House.

In 2016 while running for president, Ben Carson compared Obamacare and abortion to slavery. That year, candidate Chris Christie associated a movement geared to draw attention to aggressive policing of Black people with intentional Black criminality toward police. A few years earlier, Hillary Clinton was accused of using racial divisiveness when she said that then-Sen. Barack Obama would be unable to win over the “hard-working Americans, White Americans” necessary to win the general election.

In “Flawed Giant,” Lyndon Johnson biographer Robert Dallek writes that Johnson explained his decision to nominate Thurgood Marshall to the Supreme Court—rather than a less famous Black jurist—by saying: “When I appoint a niger to the Supreme Court, I want everybody to know he’s a niger.”

Richard Nixon’s “Southern Strategy” saw little success when employed in its explicitly racist form. And while his race-baiting anti-busing campaign would ultimately hurt GOP candidates, he realized much more success with his Suburban Strategy” or “New Majority” of coded racism in his 1972 reelection win.

No one understood this type of political posturing better than Ronald Reagan. During his 1980 presidential campaign, he discovered one Linda Taylor of Chicago who had allegedly bilked the welfare system out of hundreds of thousands of dollars. The “Welfare Queen” would generate a juggernaut of campaign followers that summer, ushering Reagan into the White House for the first of two terms.

Irrespective of Donald Trump’s insistence that Barack Obama was born in Kenya, his castigation of “sh*thole countries,” or his labeling of the late Rep. Elijah Cummings’ Baltimore district a “disgusting, rat and rodent infested mess,” the intended voter can clearly hear these messages whether they be a “dog whistle” or a fog horn.

“The less people understand an issue, the more leeway there is for [politicians] to gin up controversy,” said Lisa Gomez, a law professor at UCLA. She co-founded the school’s Critical Race Theory program in 2000. At its core, she said, Critical Race Theory helps to identify this dynamic: “When the country takes two steps forward in the name of progress, racist forces push it a step back,” she said.

Critical Race Theory is the latest political lightning rod. Almost overnight, the term seemed to appear in statehouses and at political rallies from coast to coast. In the last six months, it has morphed from an obscure academic discussion point on the left into a political rallying cry on the right.

Critical Race Theory is a way of thinking about America’s history through the lens of racism. Scholars developed it during the 1970s and ‘80s in response to what they viewed as a lack of racial progress following the Civil Rights Movement (and subsequent legislation) of the 1950s and ‘60s. It centers on the idea that racism is systemic in the nation’s institutions and that they function to maintain the dominance of White people.

Many conservatives have viewed the concepts underlying Critical Race Theory as an effort to rewrite American history and persuade White people that they are inherently racist and should feel guilty because of their so-called “advantages.” Now the term has become a catchall phrase to describe racial concepts that some conservatives find objectionable (e.g. White privilege, systemic inequality, inherent bias).

Education Week conducted an analysis earlier this year and found that, so far, about 25 states have considered legislation or other steps to limit how race and racism can be taught. Eight states, all Republican-led, have banned or limited the teaching of Critical Race Theory or similar concepts through laws or administrative actions. Teachers’ unions, educators and social studies organizations worry the limits will “whitewash” American history by downplaying the role that past injustices still may play today. Some worry that the many accomplishments made by African-Americans in sewing together the fabric of the nation will be eliminated from classroom lesson plans.

The subject has increasingly become a major focus of the Republican establishment, which has sought to capitalize on the angst even as some officeholders have failed to define what Critical Race Theory is and the threat it poses. Polls don’t quite show that the issue is cutting across party lines. A Morning Consult/POLITICO survey in June found that while a thin majority (54 percent) of Republicans believed Critical Race Theory was negatively impacting society, a plurality of Democrats (48 percent) and Independents (46 percent) said they didn’t have a sense of any impact.

“Such bans are aimed at the lower grades, and are also being aimed at public colleges and universities,” said David Horne, founder and executive director of the Pan African Public Policy and Ethical Institute. A professor at Cal State Northridge, Horne once taught a graduate seminar on Critical Race Theory where he instilled in his students that premise teaches “that we have to fully inform ourselves about unjust enrichment” by some because society supports that and the constant battering of some others because of their circumstance of birth and experience.

The real problem behind the political controversy, he said, is that “none of them seem to have a real clue as to what Critical Race Theory actually is.”

Some of the GOP-led bills specifically want to prevent the teaching of the New York Times’ 1619 Project—a sweeping collection of essays and literary works that center on Black American’s founding contributions to the country via slavery—which conservatives have scrutinized since it was originally published in 2019. Others reflect calls by former President Trump for “patriotic education” or instruction that doesn’t stray far from the traditional telling of American history.

In effect, the backlash against Critical Race Theory began in earnest last summer as the nation was trying to reckon with racism in the wake of the police killings of George Floyd and Breonna Taylor. Major corporations pledged not to be racist. The Mirriam-Webster dictionary even changed the definition of racism to include how it is systemic.

In turn, Fox News began airing segments featuring conservative activist and Manhattan Institute fellow Christopher Rufo, who on Twitter claimed he was uncovering a new “cultural revolution” that was being carried out through corporate HR, government diversity training, and public school curriculums.

Loudon County, Va.—once a GOP stronghold—has become an unexpected epicenter in the fight against Critical Race Theory. A recent school board meeting turned violent when parents demanded that public schools eliminate the teaching practice for K-12 students. One school administrator had both her job and safety threatened and received a message calling her a “God damned nig*er lover.”

In the House, the Republican Study Committee has taken on a larger messaging role within the GOP conference. Members of this conservative group were presented polling last month that shows 79 percent of respondents in swing districts do not believe children should be taught that “their destiny and inherent value depends on their skin color”—the definition the GOP has adopted for Critical Race Theory.

Not everyone in the GOP agrees that Republicans should lean too heavily into the culture wars. In May, former House Speaker Paul Ryan spoke at the Ronald Reagan Presidential Library: “As the left get more ‘woke,’ the rest of America is getting weary. It’s exhausting. And we conservatives have to be careful not to get caught up in every little cultural battle.”