The Better Watts Initiative is a call to action in Watts 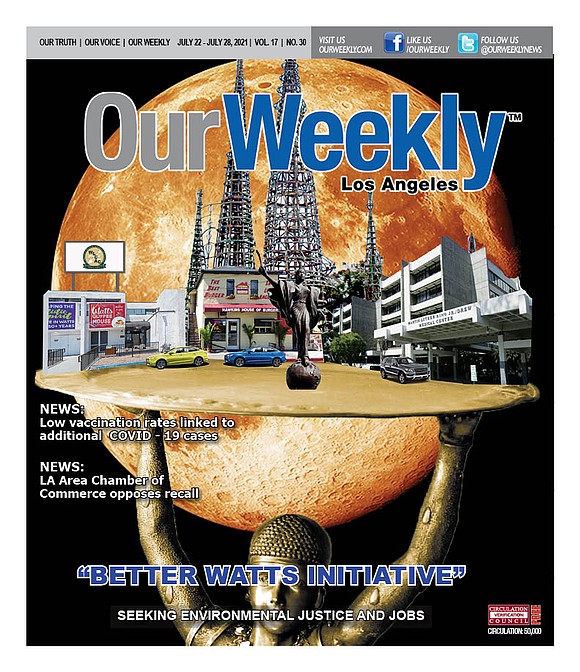 Collaboration is key when it comes to getting environmental justice in Watts.

“Unless the community comes together, we don’t stand a chance,” said Janine Watkins, a community activist and long-time resident of Watts, a historic and proud community in South Central Los Angeles.

“It’s time for Watts to save itself,” Watkins continued.

The BWI town hall centered around a call to action and a petition that will ask Gov. Gavin Newsom to intervene and stand up for the people of Watts. BWI is currently focused on three actionable priorities.

The first priority is stopping the Watts Station Project, which is an affordable housing development adjacent to the historic Watts Train Station. Our Weekly first reported about that proposed development on Thursday, June 17.

“The easiest place to put a building is Watts,” Watkins said before explaining she is tired of seeing her community being taken advantage of. Instead of the housing development near the LA Metro A Line 103rd Street / Watts Towers Station, community members would prefer to see open, green space.

That preference leads into BWI’s second priority, which is ending environmental racism by not only creating more open green space but also providing clean water and insisting that all local public housing developments in Watts eradicate harmful lead levels.

Advocates believe Watts is “unnaturally chained” to the 15th council district, where Watts is the unheard minority. That’s why activists want to move Watts to CD9, where it would be amongst the majority of constituents who have similar political and socioeconomic needs.

“To remove an entire community from one district to another is a significant issue and something we can all get behind,” said Carmen Taylor Jones, civic engagement program manager for Black Women for Wellness, who supports the redistricting effort.

A Better Watts means something different to everyone you ask. Making Watts more livable for residents is a top priority for all stakeholders.

Stix, the founder of Think Watts, spoke passionately during the BWI Town Hall.

Ideally, a “better Watts” would have more technology and resources that pave the way for the future, said Brandon “Stix” Salaam-Bailey, a well-known artist and community activist in Watts.

“A better environment, and when I say environment, I mean air and water. Better elected officials that care about the community of Watts,” Stix said, who has turned being a rapper, record producer, songwriter and entrepreneur into a position as a respected community leader.

According to the Watts Neighborhood Council, Watts did not become predominantly Black until the 1940’s, as the second Great Migration brought tens of thousands of African-Americans from the segregated south to Los Angeles.

However, between 1907 and 1926, Watts was an independently incorporated city. That’s something Stix would like to see happen again for the more than 35,000 Watts residents.

“Watts no longer being a neighborhood, it turning back into a city, so we can sustain and build our own economy and more opportunities for the individuals who have been disenfranchised and underprivileged for hundreds of years,” Stix added.

Environmental justice in Watts centers around the position that all residents deserve clean air, clean water, and safe, open green spaces for children to play and for adults to gather and exercise in peace. Meanwhile, Stix, who founded the Thinks Watts Foundation, a 501c3 organization, believes environmental justice can also be economic redevelopment, as long as it is focused on uplifting and supporting community members.

“We’re working on redeveloping Ted Watkins Park with Janine Watkins and turning it into a state-of-the-art sports complex center and a tourist stop for the (Los Angeles 2028) Olympics,” Stix continued. “We’re also working on addressing the water and air quality with new devices and systems that filter out all impurities, leads, and toxins.”

“We’re going to multi-billionaires and asking them to put their money where their mouth is, invest in this technology to go into these communities that need it the most.”

Sustainable economic development is also key. The idea is to bring 21st-century job opportunities in the technology industry to Watts.

Technology-centric jobs are some of the most viable long-term careers, Stix said.

“Let’s just name two companies, Microsoft and Amazon. That’s about four trillion dollars, combined. That’s a lot of money and that’s Silicon Valley,” Stix continued. “We can do that same thing right here in Watts. Watts has the individuals who are excited to engage in the field, so all we have to do is provide them the resources and we can build a new Silicon Valley in the community of Watts, which could only help everyone around the globe.”

A panel of community leaders and activists participated in the BWI Town Hall on Friday, July 16.

Concerned community members asked panelists whether the Better Watts Initiative has tested soil at schools and public housing developments in Watts. Since those are both public, yet private property, BWI would need permission from the Housing Authority of the City of Los Angeles and the Los Angeles Unified School District respectively. BWI is encouraging both agencies to be transparent and test their soil, water sources, and buildings for lead and other harmful chemicals.

“This meeting has been informative for me but I’m scared now,” admitted Watts resident Diana Felix.

Felix told organizers she was glad to learn about environmental issues in Watts but now she’s reconsidering doing what she thought were mundane, daily chores at home.

“I wash my clothes, I take a shower, how can I test my water because I’m petrified with this information I received (here),” Felix continued.

Malcolm Jones, a PhD student studying Kinesiology at USC told Felix he would be happy to work with her and use her results as part of a case study to affect change for thousands of households in Watts.

However, funding is needed to provide mass testing of a variety of water sources, advocates said.

“It’s powerful to put what we study into action,” added Danielle Hoague, a PhD student at the UCLA Institute of the Environment and Sustainability.

Like Jones, Hoague is a member of the Better Watts Initiative, which is currently looking into funding resources via grants and partnerships.

“At the end of the day, the infrastructure is bad and it’s going to take a municipality to fix that,” said Tim Watkins of the Watts Labor Community Action Committee and a leading member of the Better Watts Initiative.