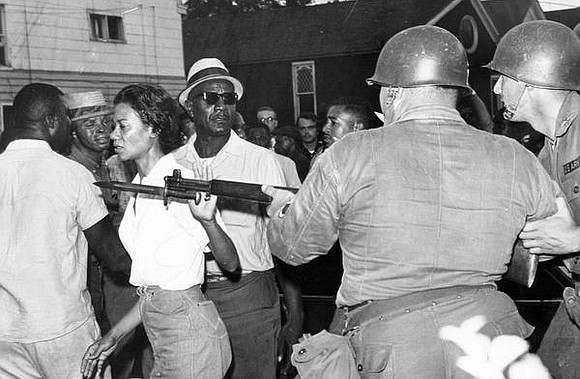 “Gloria didn’t give a damn what you said about her. She wasn’t impressed with King, Kennedy or anybody else. She considered herself to be as good as these guys were, if not better. She was a card. If you had Gloria on your side, you didn’t need anybody else.” — Activist, Author, and Sociologist Joyce Ladner.

Civil rights pioneer Gloria Richardson died in her sleep at her New York City home on July 15, her granddaughter Tya Young reported. No cause of death was given for the 99-year-old.

Little known today, Richardson was born Gloria St. Clair Hayes in 1922, to a prosperous Black family on the Eastern Shore of Maryland’s Chesapeake Bay. Her outspoken personality and sense of social consciousness were encouraged by her parents, whose lineage included prominent figures in local politics and civil issues in the Second Ward of her native Cambridge, Md. This relative affluence allowed her to attend and graduate from nearby Howard University, where she honed her skills as an activist by picketing a local Woolworth’s, where “Negroes” were denied service at the lunch counter.

Once out of college, she evaded World War II era notions of propriety and behaviors expected from well-bred ladies of her status, by testing the waters of activism and civil rights. By 1962 the push for desegregating public accommodations, and improving economic, employment, and health conditions led to the founding of the Cambridge Nonviolent Action Committee (CNAC), (an affiliate of the better known Student Nonviolent Coordinating Committee or SNCC). Richardson served as it’s co-chair in what became known as the Cambridge Movement.

“Self-defense may actually be a deterrent to further violence,” she reasoned. In this, she stood in line with Deacons for Defense and Robert F. Williams (author of “Negroes with Guns”). The overtures of Martin Luther King Jr. and John Lewis to get her to adopt a more nuanced, less confrontational approach in protest were ignored, as nonviolence was used as an initial tactic, with self-defense an optional, secondary alternative if needed.

“Guns were carried as a matter of course and it was understood that they would be used,” Sellers said.

Echoing the sentiments of contemporaries like Stokley Carmichael, Richardson refused to condemn this ideological shift, noting that government intervention was likely only with the threat of all-out insurrection.

Curiously, she found herself on the Klu Klux Klan’s “hit list” of agitators to be firebombed, right after King.

Eventually, her tactics prevailed, and she met with U.S. Attorney General Robert F. Kennedy to negotiate what is now known as the "Treaty of Cambridge."

She was honored for her leadership with a seat on the stage for the historic March on Washington in August, 1963, but, perhaps tellingly, was not given the chance to address the 250,000 attendees.

For more on this unsung heroine of human equality, read Joseph R. Fitzgerald’s 2018 biography "The Struggle is Eternal: Gloria Richardson and Black Liberation," and “Civil War on Race Street: The Civil Rights Movement in Cambridge, Maryland,” by Peter B. Levy.