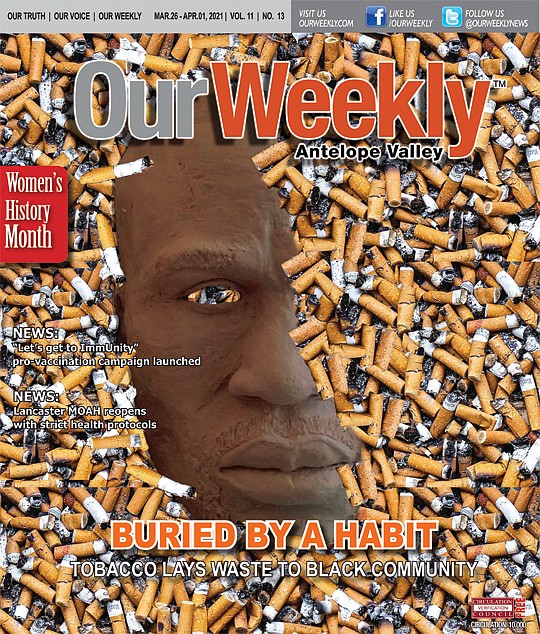 According to the American Lung Association, there are approximately 600 ingredients in a cigarette. When burned, that cigarette creates more than 7,000 chemicals. At least 69 of these chemicals are known to cause cancer, and many are toxic.

These toxic chemicals harm nearly every organ of the body, according to the Centers for Disease Control and Prevention (CDC). Asthma, cancer, diabetes, heart disease and vision loss are just some of the diseases/conditions associated with smoking.

In 2009, with a reference to his own struggles with a cigarette habit, President Barack Obama signed legislation bringing tobacco products under federal control for the first time. The Tobacco Control Act took most cigarette flavors off the shelves. All except for menthol.

Last year, Gov. Gavin Newsom signed Senate Bill 793 into law. This law was to be one of the country’s strongest restrictions on flavored tobacco and was supposed to go into effect on New Year’s day. But menthols are still on the shelf in California because the tobacco industry turned in enough signatures to call for a referendum of that law. Voters will decide whether or not to overturn SB 793 in November, 2022.

Detractors say SB 793 is racist and would criminalize merchants who sell to Black smokers, who prefer menthol. But Carol McGruder of the African-American Tobacco Control Leadership Council (AATCLC) believes the opposite is true. “It was racist when they left menthol in the market,” she said. “Tobacco is preying on us.”

“We are in profound historical pain,” said McGruder whose AATCLC partners with community stakeholders to influence the direction of tobacco policy. “Our lives have value. We are treated so indifferently.”

McGruder joined a panel of experts recently to address the issue of menthol cigarettes in the Black community. She noted that more than 45,000 Black Americans die of tobacco related disease every year— more annual deaths than those from AIDS and homicides put together.

If cigarette sales are any indication, the pandemic seems to be making a difficult situation that much harder. People are stuck at home. They are stressed. And they appear to be smoking more. After decades of consistent declines, cigarette sales held steady this past year.

Studies show smokers and people who vape are at increased risk of developing chronic lung conditions which put them at a high risk for severe illness from COVID-19.

While thousands of Blacks have died during the current COVID-19 pandemic, McGruder and her colleagues believe the time is now to tackle the tobacco issue.

“We have to walk and chew gum at the same time. We cannot wait.” she said. “Blacks live under tremendous stress and are self medicating with cigarettes. Tobacco control must be more relevant than ever.”

Dr Phillip Gardner with the AATCLC explained that menthol gives cigarettes a candy flavor, which hides their danger.

“Menthol helps the poison go down easier,” Gardner said. “Menthol masks the harsh taste of smoking. Menthol by definition is an anesthetic. And the more toxins you take in, the more addicted you become.”

Gardner explained that nicotine is especially stored in tissues with melanin. Melanin being the dark brown-to-black pigment occurring in the hair, skin, and iris of the eye. This makes it even harder for Blacks to quit.

“Menthol is a social justice issue,” Gardner said. “It’s outright discriminatory and genocidal. We need to get these products off the shelves now.”

The AATCLC encourages everyone to play their part in this Civil Rights Movement. The organization believes that menthols are priced cheaper in Black communities, making them particularly appealing to young people and the tobacco industry continues to target a new generation of Black youth to addict them to their flavored products.

The Los Angeles County Department of Public Health (DPH) has launched a campaign that is reaching out to Black, LGBTQ and young audiences.

It is their first quit menthol cigarette campaign to address the risks and harms of menthol, flavored tobacco and vaping.

Nearly 70 percent of smokers would like to live smoke free. But turning that wish into a reality isn’t easy. According to one study, the average smoker will attempt quitting 30 times before they succeed.

“Most people have mixed emotions about quitting, and they often want to wait for the perfect time to try,” said Sharon Cummins, director of the California Smokers’ Helpline, a free service which has helped nearly a million Californians quit smoking over the past 30 years.

“We’ve found that it’s best to jump in and take action. Set a quit date, make a plan and get support. Quitting, even for a few days or a week, can build confidence that it’s possible, and can help you develop the skills to achieve a smoke free life.”

Los Angeles resident Steven Littles smoked his first cigarette when he was 15. He started -- like so many others—because his friends did it, and it was the cool thing to do.

Looking back on his life as a smoker, Littles says he couldn’t give an exact figure for the number of times he tried to quit. He does remember that most times he didn’t last more than a day.

Most people who try to quit will slip up. Yet each try is meaningful.

Each time a person tries to quit, they learn more about what it takes to quit for good. They take one more step toward the finish line.

One of the reasons it was so hard for Littles to quit was because he was surrounded by smokers.

“At my work, there was a culture of smoking and a group of us would take several smoke breaks together every day,” said Littles.

That kind of pressure is especially problematic for smokers during the pandemic.

According to a recent study at tobaccofreeca.com, smokers experience worse symptoms after getting COVID-19. Another study found that those who smoke were 2.4 times more likely to get admitted to an intensive care unit, need mechanical ventilation, or die compared to those who did not smoke.

However, once a smoker puts their plan into action and throws out the cigarettes or vape pins, it’s important to remember that the going will be tough. Withdrawal is common.

Despite the difficulty and all the times he tried and failed, Littles sees a message of hope in his story.

Smokers and vapers are invited to visit https://laquits.com/stressed/.

Additionally, there is a free resource to help Californians quit smoking or vaping. It includes a supportive group, tips to deal with triggers or creating a plan of action nobutts.org.